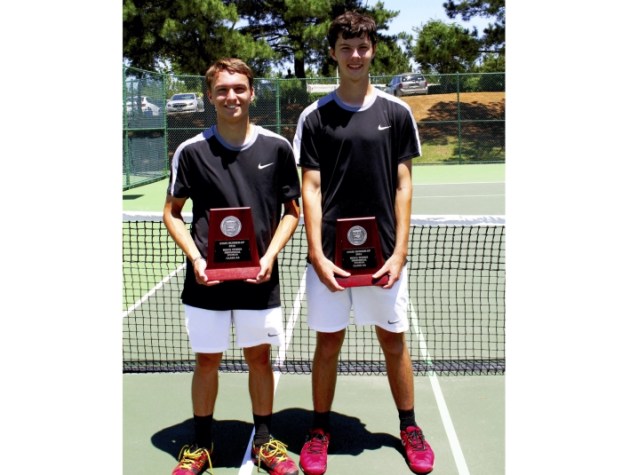 CARY — Salisbury doubles partners Spencer Storey and David Derrick ended their high school careers in style.
No, they didn’t win the state championship on Saturday, but they did take the court in Cary for the final match in the 2A state individual tournament.
They’ll take that memory with them as they head off to become “normal” students at big universities — Storey at Florida; Derrick at UNC Wilmington.
“The Carrboro guys we played in the final (Brian Freiburghouse and Jason Wycoff) were just better … the better team definitely won,” Storey said. “We left it all out there and we gave it everything we had. That’s all you can do.”
Carrboro is the defending 2A dual team champ. Freiburghouse and Wycoff have been a big part of Carrboro’s tennis dynasty. They beat the Salisbury seniors, 6-2, 6-3, in the title match.
“Freiburghouse was incredible at the net, great at poaching, and Wycoff was very consistent in the back,” Storey said. “They were good players and good guys. We had fun playing them.”
Storey and Derrick had a stressful semifinal match Saturday morning to advance to the final.
The Hornets won 6-2, 7-6 (7-2) over Washington’s Holt McKeithan/Ben McKeithan.
“They were brothers who had played together a long time and they were really good athletes,” Storey said. “We started out strong, but then we lost a little focus. We got it back together in time to win in two sets. We really didn’t want to go to a third set and we snuck through.”
Storey and Derrick finished in time to watch the conclusion of the three-set semifinal between Freiburghouse/Wycoff and Brevard’s Liam Baer/Cameron Wilson.
The Hornets saw enough to know they had their work cut out. Freiburghouse, a senior, was the state singles runner-up when he was a freshman. Wykoff, a junior, was a runner-up for last year’s doubles championship.
The Hornets took their best shot before accepting state runner-up plaques. Pride outweighed disappointment.
“There’s really not much downside,” Storey said. “We competed as hard as we could and we finished second in the state.”

From staff and wire reports Sierra Ghorley’s infield hit on a head-first dive in the sixth inning broke a 1-all... read more