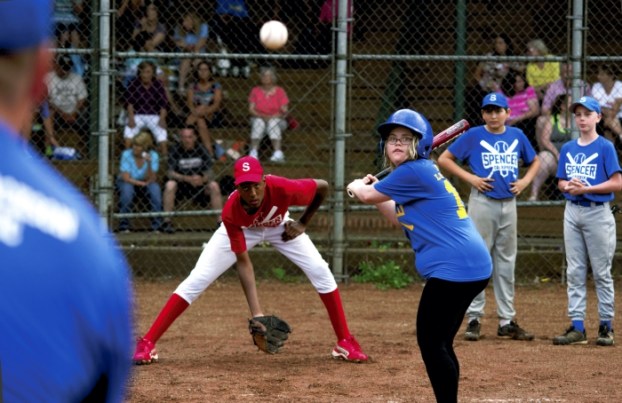 SPENCER — With a baseball bat firm in his grasp, Ryan Brooks stepped up to the plate. After setting his feet, Brooks swung hard at the first pitch and missed high. With equal force, he swung at the second pitch and smacked it into right field, drawing a round of cheers from those on the field and in the stands.

He dropped the bat, locked his eyes on first base and took off. He rounded first, and eventually stopped at second. He smiled and it seemed the entire crowd at Spencer’s 8th Street Park smiled with him.

Brooks drew cheers just a few moments later when he rounded third and sprinted for home. After scoring, he lifted his hands in celebration.

“Way to go, Ryan,” a person in the crowd shouted.

After one inning and a couple rain delays, Brooks was back up again. This time, he swung and missed a few pitches. When he made contact, the ball zipped toward second base. The crowd again cheered loudly.

Brooks was among the many baseball players, parents and coaches gathered Thursday at 8th Street Park for the Spencer Cal Ripken program’s buddy ball league. It pairs intellectually and developmentally disabled children and teens with those in Spencer Cal Ripken’s other leagues. The North Rowan High School varsity baseball team has also helped out.

This year is Spencer Cal Ripken’s first organizing a buddy ball league. It’s free, games usually last two or three innings and no one keeps score. The “buddies” help the developmentally disabled players with running from base to base and fielding the ball.

“Our goal is for these kids to have someone to play with and be a mentor and, in return, the other players can learn a little something from it,” said Spencer Cal Ripken President Jeremy Bates.

There are a few weeks left in this year’s season, and Bates said he hopes to put a second buddy ball league together in the fall. For now, the buddy ball league plays on Thursdays at Spencer’s 8th Street Park.

Several of the of the disabled who participate in the current buddy ball league are part of programs put on by the Arc of Rowan, a United Way partner agency. Others simply found out about the league and decided to play.

Arc of Rowan Executive Director Shela Sapp said buddy ball has positively affected its participants. One important part of the buddy ball league, she said, is that parents are able to sit in the stands and watch their kids “like any child playing a sport.” Some parents, however, decide to run the bases with their child.

North Rowan baseball coach Aaron Rimer’s players talked about how grateful they were to participate in the buddy ball program. North Rowan Senior Brandon White said Thursday’s buddy ball event was especially meaningful after being on the losing end of a 12-0 game one day earlier.

Rimer, however, said he’s not sure his players truly realize how much the program means to the disabled children.

“These kids just have a ball out here, they enjoy it so much and it’s a great thing thats been put together,” Rimer said. “I don’t think our kids truly grasp how important this is to these young men and women out here.”

After crushing the baseball into the outfield during the first inning, Brooks said his favorite part the game is hitting the ball. From his expressions, Brooks also clearly enjoyed the interaction with other players, too.

When Brooks stepped up to the plate in the second inning, he looked at North Rowan junior Steven Thurston and smiled.

“Wooooo,” Thurston exclaimed, and the pair both lifted their hands into the air. Seconds later, Brooks would nearly smack the ball into the outfield.

For more information about the Spencer Cal Ripken program and its buddy ball league, visit spencercalripken.siplay.com.