A berry good lunch: Local strawberries a treat for students 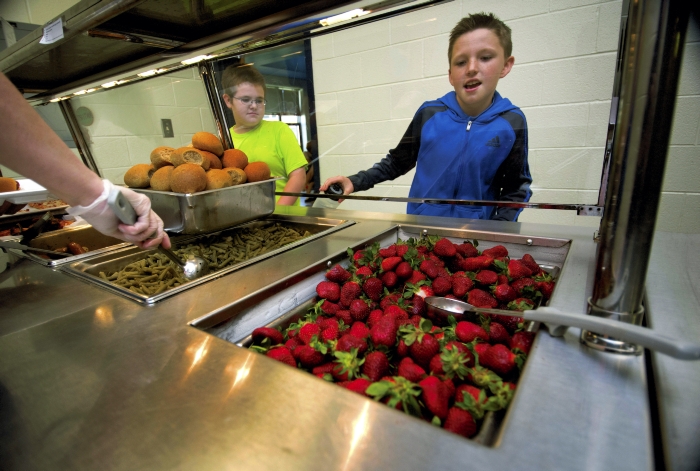 JON C. LAKEY / SALISBURY POST Third grader Chase Fisher looks at the strawberries on the lunch line at Millbridge Elementary School on Thursday. Fresh strawberries from Patterson Farm were on the menu. With a main course between pizza, hot dog or chicken, nearly all students also asked for the sweet treat.

When she walked through the lunch line on Thursday, she, and other Millbridge students, got a surprise – fresh, N.C. strawberries for lunch.

Rowan-Salisbury School Nutrition Supervisor Kimberly Hurley said the fruit is part of a farm-to-table initiative the school system takes part in. Every two weeks, a shipment of fresh fruits and vegetables from local farms is delivered.

The system gets everything from lettuce to sweet potatoes and peaches from N.C. farms, and Hurley said they try to buy produce as locally as possible. And when it comes to strawberries, that means Patterson Farms.

“It’s right in our back yard,” she said, sitting in the bustling Millbridge cafeteria.

From Millbridge, the farm is just a hop, skip and a jump away. Assistant Principal Dr. Angela Lingel-Linder said that kindergartners went strawberry picking just last week. And the Patterson family has helped make the school shine – even helping with a “discovery garden,” on the school’s front lawn.

“They have always been great supporters of Millbridge,” she said.

Regardless of where they came from, strawberry day is a popular one in the district, Hurley said. The fruit is sweet, colorful and lets kids eat with their hands. The fruit was an optional item at lunch Thursday, but made its way onto nearly every plate.

For some students, Hurley said, the farm-to-table partnership could be the first time students try certain foods. She remembered a fourth grader in the western part of the county who confessed he’d never had a strawberry.

That student is one reason Hurley loves the fresh produce she’s able to help place on trays. Children develop their palate when they’re young, Hurley said, and what they eat now can impact the kinds of foods they’re drawn to later.

“It really opens up the door to how they receive food in their later years,” she said.

Schools will receive another shipment of food at the end of May, but the strawberries were the last shipment of farm-to-table produce for the year.

For the students, it’s a good treat to close out the year.