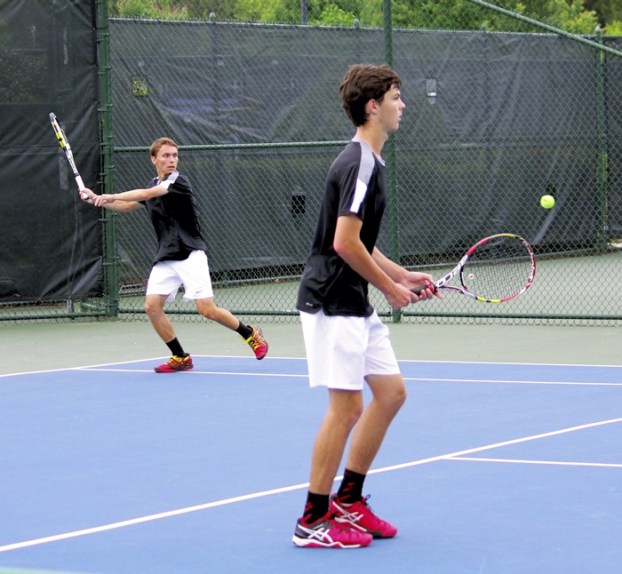 submitted photo ... The Salisbury High School doubles tennis team of David Derrick, left, and Spencer Storey, during Friday’s action at the state 2A championships in Cary.

Salisbury’s doubles team of Spencer Storey/David Derrick won two matches in Cary on Friday to reach the semifinals of the 2A state individual tournament.
The win early in the day — against Washington’s No. 2 doubles team of Zach Pagnani/Mac Skillen — was a relatively routine, 6-0, 6-4.
But the Hornets had to rally in their second match to win, 3-6, 7-5, 6-2, against North Carolina School of Science & Math’s duo of Vihal Naik and Mrinaj Janampalli. Naik-Janampalli had a first-round bye, so they were better rested, and they’d lost only once all season.
“We’ve played several teams as good as the first team we played today, but the second match was a really tough one,” Storey said. “They were good. We had to bring it.”
Storey/Derrick have brought it often enough this season to be 23-1.
Derrick said the duo has been playing together only two years, but they make a formidable team.
“We’re both able to make shots,” Storey said. “And when we’ve played against people who might be hitting the ball better that day, we’ve been able to win by being in the right spot at the right time. We both can keep the ball in the court, and sometimes we frustrate people.”
When they were down after the first set of their second match, the Hornets were in a position they haven’t been in often, but the seniors responded to the challenge.
“When we got down a set it hit me that this might be the last one that we’d ever play,” Derrick said. “I really didn’t want to go home. I really wanted to be back playing on the last day. I started doing a lot better on my returns. That’s when it started clicking for us.”
Storey had a similar thought process.
“We started that second match a little too tight,” Storey said. “When we got down, I told myself that this was it and it was time to play looser and just let it go.”
It worked. The Hornets turned the tide in the second set and controlled the third set.
“We’re pretty worn out,” Storey said. “But it was worth it. We’ll be OK with it, if we get to play two more on Saturday.”
The Hornets have to win twice today to win the state championship.
Their semifinal match will be against Washington’s No. 1 doubles team of brothers Holt and Ben McKeithan, who probably have been playing together since they were toddlers.
“It’s guys we don’t know at all because they’re from a completely different part of the state,” Derrick said.
Like Storey and Derrick, the McKeithans were regional champions.
They’ll start warming up today at 8:45 a.m. Play will start at about 9. The winner will advance to the title match.