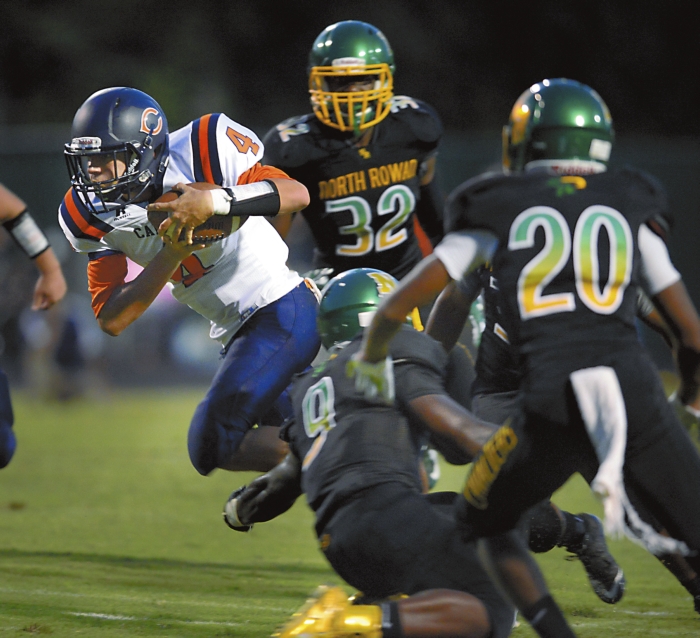 SPENCER — Baker University?
After he tells people where he signed, North Rowan linebacker Omar Lipscomb knows the next question he’s going to hear is: ‘Where in the world is Baker?'”
He doesn’t mind the puzzled looks. He’s happy with his decision, proud that he’s got a chance to keep tackling people and to get a college education.
“Even if football wasn’t in the picture, I’d be going somewhere to get a degree,” Lipscomb said.
For the record, Baker is in Baldwin City, Kansas, roughly 1,000 miles from North Rowan, but just 45 miles southeast of Kansas City.
It’s bigger than you might think (more than 3,000 students) and Baker’s Wildcats play better football than you might think.
Baker is NAIA, and there are only nine football-playing NAIA conferences in the country, but many of the strongest programs are located in the area where Lipscomb is headed.
When it comes to NAIA football, Baker is among the best. Baker finished 11-2 last season and was ranked second nationally in NAIA when it completed the regular season with a 10-1 mark. Baker, which plays in the Heart of America Athletic Conference, is ranked fifth in the NAIA spring football poll, so the Wildcats are expected to be stout again in 2016.
Baker will play Peru, but it’s the one in Nebraska, not the one in South America. Baker also has Graceland on the 2016 schedule, although it’s the one in Missouri, not the one in Memphis.
In a lot of cases, students recruit themselves these days. They can make contact with schools by email and fill out “paperwork” online. If they’ve got highlight videos, it’s not difficult for a coach to check out a prospect on his office computer.
“Since I was a kid I wanted to play college football and I sent out emails to a lot of schools,” Lipscomb said. “Baker looked at my highlights and offered a scholarship. It’s a great opportunity. I know it’s a long way off, but I’ll be OK.”
Lipscomb said he also drew recruiting interest from Division II schools Livingstone and Fayetteville State and D-III Methodist.
Lipscomb was a very good high school player, a three-year starter on stout defenses.
“He got better as he went along, and that’s what you want to see,” North linebackers coach Josh Sophia said. “He’s smart, he’s athletic, and he doesn’t mind work. I’ve got him in weightlifting class now, and he’s one of the hardest workers I’ve got. He has all the tools necessary to go to college and be successful on the field and in the classroom.”
As a junior, Lipscomb made 75 tackles, including 11 in a standout game against Statesville.
North’s linebackers are supposed to make a lot of tackles, and Lipscomb had 72 more hits — 45 solos and 25 assists — as a senior. That total ranked second on the team to fellow linebacker Javin Goodine, who had 83.
Lipscomb made nine tackles in his final high school game, the playoff loss to Winston-Salem Carver. He had three tackles for loss against Davie County, and he picked off passes in Central Carolina Conference games against Salisbury and East Davidson.
“He was a good senior leader for us,” Goodine said. “He was my right-hand man and a great teammate.”
Lipscomb expects to be an outside linebacker at Baker, a school whose distinguished alumni list includes Green Bay Packers head coach Mike McCarthy.
McCarthy piloted the Packers to victory against the Pittsburgh Steelers in Super Bowl XLV on Feb. 6, 2011.
A Super Bowl victory will be hard for Lipscomb to top, but he has a good chance to accomplish his down-to-earth dreams.
“I had great coaching at North Rowan and I had role models in Coach (Steve) Williams and Coach Sophia,” Lipscomb said. “I want to be a P.E. teacher and I want to be a football coach. I want to teach kids in the same way that my coaches taught me.”