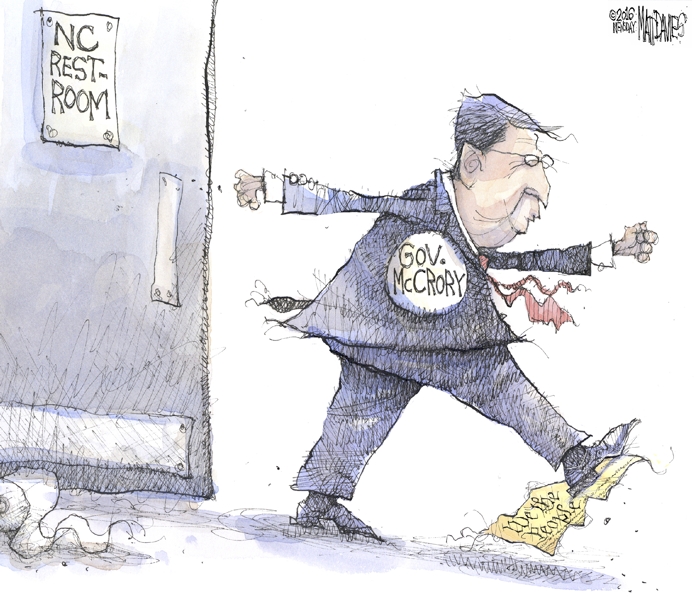 RALEIGH — For weeks, House Bill 2 has made national and international headlines, thrusting North Carolina into the spotlight over bathroom access and rights – or lack thereof — for transgender people.

More recently, Gov. Pat McCrory and Republican legislative leaders in North Carolina filed separate lawsuits asking a judge to declare that HB2 isn’t discriminatory. The U.S. Department of Justice filed its own lawsuit the same day, seeking an injunction against enforcement of HB2 and asking federal courts to declare that the law discriminates against transgender citizens.

By the end of the day that the dueling lawsuits were filed, the websites of The New York Times, The Washington Post and The Wall Street Journal all carried the news prominently. Each had a least a couple reporters working on the story.

HB2 is now a major national issue during this all-important election year — and becoming a more visible one. And it’s clear that McCrory and other GOP leaders in North Carolina are perfectly OK with that. Perhaps they’re trying to steer attention away from their state. Or maybe they want an issue to unite GOP voters in North Carolina and across the United States and entice them to show up at the polls this year. The debate comes as their party is divided over Donald Trump and concerns are mounting that GOP candidates might lose down-ticket races if their voting base doesn’t turn out in November.

Whatever their purpose and end goal, they are trumpeting HB2 and all of its ramifications as an issue that all Americans should be concerned about.

“The Obama administration is bypassing Congress by attempting to rewrite the law and set restroom policies for public and private employers across the country, not just North Carolina,” McCrory said upon filing his lawsuit. “This is now a national issue that applies to every state and it needs to be resolved at the federal level.”

In a news conference that day, McCrory made several references to HB2 becoming a national issue that should be resolved by the federal courts or Congress.

At the same time, N.C. House and Senate Republicans sent out news releases and appeared on national news shows ripping President Barack Obama’s administration over its actions regarding HB2.

State Rep. Dan Bishop, a Charlotte Republican and lead sponsor of HB2, sent out a statement saying the “Obama administration is completely out of line in attempting to cram its radical new interpretation of federal civil rights down the throats of employers and employees across America.”

Bishop also appeared on CNN concluding: “This is now a national issue. And people across the nation need to be aware of that.”

The same day, state Sen. Andy Wells, a Hickory Republican, sent out a message that began with this: “Occasionally someone will ask, ‘Doesn’t the legislature have anything better to do that talk about bathrooms?’ I am not sure we do.”

Yes, you could reasonably argue that the Charlotte City Council started all of this by passing its ordinance allowing transgender people to use the bathroom that corresponds with their gender identity. Plenty of Republicans are arguing that they didn’t start this mess.

And I’m not suggesting in any way that the issues raised in North Carolina don’t deserve attention on the national stage. In a news conference in Washington, D.C., announcing a federal civil rights lawsuit against North Carolina, U.S. Attorney General Loretta Lynch said the Obama administration’s fight against HB2 is about more than bathrooms.

“It’s about the founding ideals that have led this country haltingly but inexorably in the direction of fairness, inclusion and equality for all Americans,” she said.

It is an important issue, but the latest developments — and their timing — have plenty of political radars spinning out of control.

Patrick Gannon is the editor of the Insider State Government News Service in Raleigh. Reach him at pgannon@ncinsider.com.