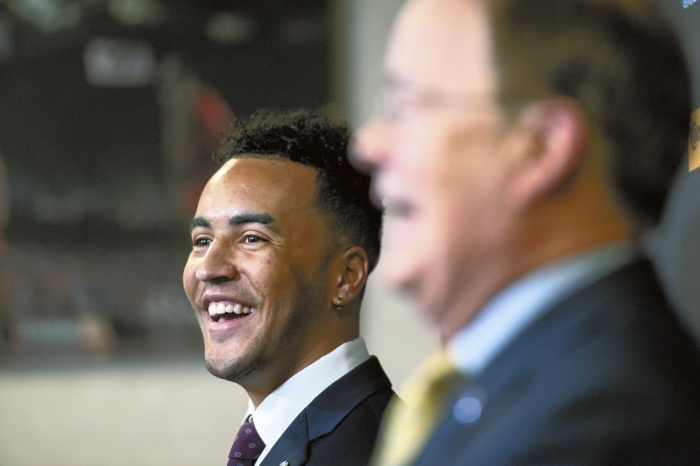 Kaitlin McKeown/The Herald-Sun via AP ... Former Duke University football player Blair Holliday smiles while sitting next to coach David Cutcliffe during a press conference at Cameron Indoor Stadium in Durham, Thursday. Holliday will walk across the stage this weekend during Duke’s graduation ceremonies.

DURHAM (AP) — Blair Holliday will walk across the stage this weekend during Duke’s graduation ceremonies.

Almost four years after he was nearly killed in a boating accident that ended his playing career, the former receiver considers himself lucky that he can even walk at all.

Holliday will take part in the university’s commencement Sunday after earning his degree in December and completing his first semester of postgraduate work at the school. The Sherman Oaks, California, native is preparing to move to Atlanta for a summer internship with Fox Sports.

Speaking in a public setting for the first time since the accident, Holliday showed no visible or audible indications of any lingering effects.

“I’m getting back to my normal self, but I see little entities that I’m getting better at — my memory’s getting a lot better,” Holliday said. “I’m still getting there, but it’s more and more every day.”

Holliday doesn’t have any memory of the crash that completely changed his life.

He and then-teammate Jamison Crowder, now with the Washington Redskins, were riding jet skis July 4, 2012 on Lake Tillery in central North Carolina when they collided. Holliday said he and Crowder keep in regular contact, but noted when they do catch up they don’t talk about the accident.

Holliday was taken to a nearby hospital, then airlifted to the UNC Trauma Center in Chapel Hill, where he spent five days in a coma. His long rehabilitation period included significant time with Duke’s neurologists and at the Shepherd Center, a brain injury treatment center in Atlanta.

“All those people just kept telling us that the best thing Blair had going for him was his strength and his age,” coach David Cutcliffe said. “But I don’t think I understood Blair’s strength. It goes beyond physical stature.”

Holliday said he “could definitely see myself doing the things I wanted to be doing, but I didn’t have the connection from my brain to my extremities to be able to do that. That was the most difficult thing to cope with.”

Still, he recovered well enough to appear on the sidelines that season, and the Blue Devils often said Holliday — who would have been a starting receiver on that team — was their inspiration as they snapped a 17-year postseason drought that year and started a run of four consecutive bowl appearances.

The Blue Devils always considered him part of the team, even though he couldn’t strap on a helmet and pads anymore and his career stat line was limited to those three catches for 30 yards as a freshman in 2011.

He helped out at practices as a student coach, threw a few balls around and otherwise lived vicariously through his teammates.

“I wanted to be out there on the field, but I saw it … wouldn’t be the best for my actual life,” Holliday said. “I realized that me still being (at practices) meant that I was still part of the team.”

“I think he’s got something important to do, and I’ve always told him that,” Cutcliffe said. “He’s been given an opportunity to do something extremely important. He can’t miss that opportunity.”