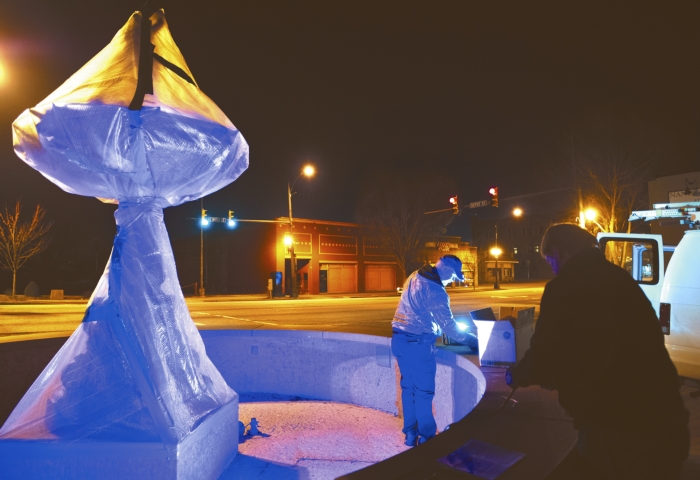 ALLISON LEE ISLEY/SALISBURY POST Alan File, Salisbury’s infrastructure technical supervisor, and Randy Lapish, owner of Caribbean Pool Service in Concord, from left to right, test different options for colored lighting for Gateway Park's fountain on Monday evening. The fountain, which is a replica that represents the biblical figure, Rebecca, is undergoing general maintenance. It is located on the corner of Depot and East Innes Streets in downtown Salisbury.

SALISBURY —The Historic Preservation Commission decided to allow colored lighting at the Gateway Park fountain during its meeting on Thursday.

The city is performing maintenance on the fountain and proposed replacing the existing light bulbs with LED bulbs that can change colors.

At a meeting last month, Stephen Brown, the applicant, said the lights would be mounted in the side of the second tier of the fountain and directed upward. The light structures would be underwater and not visible to the public.

He also said the lights would be white for a majority of the time.

The commission decided to postpone the decision to let staff research the land development ordinance concerning colored lights and how other historic districts have regulated downtown lighting.

Catherine Garner, staff liaison for the commission, said that Christmas lighting is not regulated by the land development ordinance. Only two cities responded to the city about their regulations concerning downtown lighting.

Garner said the preservation planner from Wilson said the city does not regulate lighting and sees color as something reversible. The preservation planner from Raleigh said they do regulate colored lighting. They provided minutes from a case where they dealt with colored lights that would shine light upwards on a landmark building. The lights were approved with conditions, but the lights were never installed. One condition was that the colored lights could only be used for a maximum of 15 percent of the year.

The fountain at Robertson Eastern-Gateway Park features the Biblical character Rebecca and is on the corner of East Innes and Depot streets. It is a replica of a fountain sat in the intersection of Innes and Main streets that was originally constructed in 1888 and removed in 1905.

The fountain previously had only white lighting.

During the public hearing, Clyde, a local artist and collector, spoke against the colored lights.

Clyde also mentioned that the lights were already installed and tested. In late March, Randy Lapish, owner of Caribbean Pool Service in Concord, gave Alan File, Salisbury’s infrastructure technical supervisor, a preview of what the colored lights would look like in the fountain.

Clyde’s biggest concern was that the lights were not compatible with the historic nature of the fountain or the rest of the lighting in the downtown area.

After closing the public hearing, Commissioner Carl Peters said he had no problem with having colored lights.

“It’s not unreasonable to me to think that colored lights could be put into the fountain to be turned on at holidays,” he said.

Commissioner Elizabeth Trick said the change would not be permanent.

Peters read the findings of fact and made a motion to award a certificate of appropriateness when Chairman Andrew Walker asked if the commission wanted to limit the colored lighting to no more than 15 percent of the year.

Walker decided to reopen the public hearing, and applicant Stephen Brown said they would limit the colored lighting to national holidays only.

Clyde came back up to ask how the lights would be changed to different colors and how it would be regulated.

Deborah Young, who works for the city, said they could change the color of the lights with switches and would coordinate the color changes with employee holiday schedules. Each holiday could result in the fountain being a different color for about four to five days.

There are 12 national holidays recognized by the city.

The commission approved a certificate of appropriateness with the condition that the lighting would be colored only for national holidays, not to exceed 15 percent of the year. The certificate was approved five to two, with Commissioners Dan DeGraaf and Sue McHugh voting against.

The commission also approved a certificate of appropriateness for a gazebo at 315 S. Ellis St.