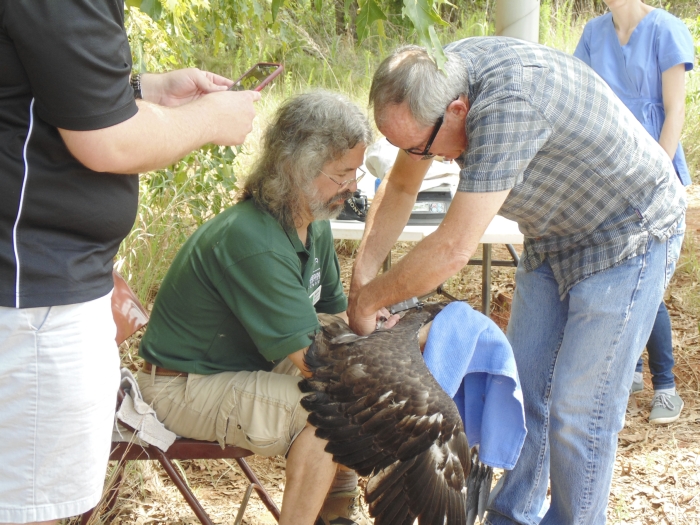 Carolina Raptor Center, with the help of NC State’s Ted Simons, installed a transmitter on the nine-week-old eaglet, Freedom.

HUNTERSVILLE — Freedom, the eaglet hatched at Dan Nicholas Park, is getting ready to take off.

The eaglet currently is spending time in the hack tower awaiting the time when it is ready to adventure into the wild.

Executive Director Jim Warren said the Raptor Center has released more than 30 bald eagles into the wild since 2008. The transmitter attached to Freedom and the Animal Tracker application “will allow observers all over the world to share in our success,” Warren said.

The center has partnered with N.C. State University and N.C. Museum of Natural Science to track the migration patterns of eagles in the wild. Citizen scientists will be able to track the birds’ migration online through movebank.org. or on a smart phone via the Movebank App – “Animal Tracker.” The app was co-piloted by Dr. Roland Kays, researcher at the N.C. Museum of Natural Science, and is publicly available through app stores for smart phones and tablets. Users of Movebank should search for the Life Track Bald Eagle study. This technology will allow ordinary people to track the movements of bald eagles included in the study throughout their lifespan.

This transmitter installation is part of a STEM education and eagle conservation grant provided to CRC by Duke Energy.

The Dan Nicholas eaglet, Freedom, poked its head through his shell on March 10. Its parents are bald eagles Liberty and Justice, both of whom have lived at Dan Nicholas Park since 2006.

On April 8, Carolina Raptor Center moved the eaglet from the Dan Nicholas Park Nature Center to the Eagle Aviary to be fostered by two eagles there. The bird was determined to be a male through DNA testing.

The eaglet was transferred to the hack tower on May 3. Carolina Raptor Center uses an accepted practice of “hacking” to reintroduce baby eaglets into the wild. Also called “soft release” because it occurs over a period of weeks instead of during a single event, hacking has been used to release approximately 10 eaglets at CRC.

The young Eagles are placed in the tower, where they can view their new territory. As the days go by, they finish growing the feathers and muscles needed for flight. They are fed daily through a food hatch. At around 12 weeks, the doors are opened so that the bird can fly in and out (still fed every day) until they are ready to fly away.

Bald eagles are year-round residents in the Piedmont region of the Carolinas due to the proximity to large bodies of water. In the 1970s, there were no known bald eagles in North Carolina due to the insecticide DDT. Legislation banning DDT passed in 1972 and efforts began to reintroduce bald eagles into the state. The development of new habitats through manmade lakes like Lake Norman and breeding and release programs have all led to an increase in the bald eagle population. In 2007, the N.C. Wildlife Resource Commission figures identified 70 bald eagle nesting sites across the state.