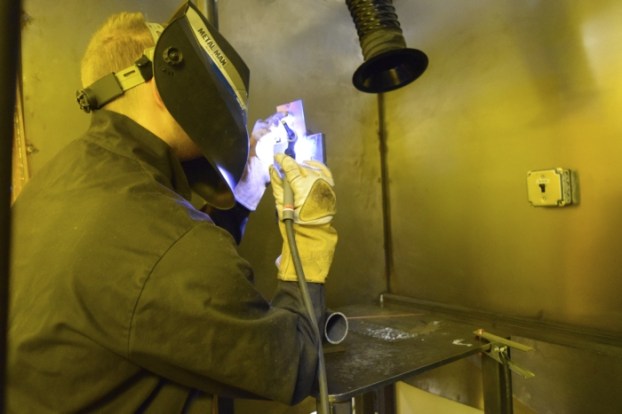 A.L. Brown High School Junior Nicholas Daniels works on his certification project for the school's new welding program. The program is a partnership between the school and Rowan-Cabarrus Community College, and when Daniels graduates in a year, he'll have the skills needed to enter the workforce immediately. Rebecca Rider/Salisbury Post Daryle Adamsdirector of CTE, STEAM and Title III at Kannapolis City Schools, examines a piece a student made during welding class. In a partnership with Rowan-Cabarrus Community College, A.L. Brown juniors and seniors have the chance to become certified in MIG and TIG welding. Rebecca Rider/Salisbury Post

KANNAPOLIS — In the basement of the old Carver building, A.L. Brown students are busy breaking down welding machines and switching out gas canisters. It’s the last day of class for the new welding program, and instructor Mike Huffman said the 12 students who make up the program’s cohort are putting away all the tools they won’t need in fall.

Nicholas Daniels, a junior at A.L. Brown said he applied to the welding program because he thinks welding is a challenge.

“It’s something that I was always interested in, and I’m more of a hands-on person,” he said.

On a white board in the classroom, Huffman wrote a quote from a prospective student: “Put a tool in someone’s hand . . . everyone is equal.”

Since it launched at the beginning of the school year, Kannapolis City Schools’ welding program — a partnership with Rowan-Cabarrus Community College — has aimed to do just that — to put tools for success in the hands of its students.

The track only has 12 spots, and Huffman said he looks for students who enjoy working with their hands. For those who have the dedication to master it, welding is a valuable skill – and it can pay well, right out of high school.

“You don’t see that anymore,” Huffman said, “What do you do? They’re not going to go to McDonald’s and flip burgers.”

Students at A.L. Brown High School enter the cohort-structured program their junior year. By the time they graduate, they’ll be certified in metal intert gas and tungsten inert gas welding and have the skills to earn between $30,000 and $40,000 a year.

“So as a senior in high school, if they wanted to go into the workforce, they’re employable,” Daryle Adams, director of CTE, STEAM and Title III at Kannapolis City Schools said.

If they choose to take an additional year of training at RCCC to complete the college’s three-year welding program, they could earn as much as $80,000.

Adams said the district began collaborating with RCCC more than a year ago. The school wanted to expand programs from the college’s Career and College Promise program, which allows high school students to earn college credit free of charge.

The goal was to find a career track that would certify students to work once they graduated while also offering an option to continue education.

“At that point we realized that the welding industry was going to grow again in this area,” Adams said.

With a booming housing market in Kannapolis and Cabarrus County, and industrial offerings in the Carolinas, it was the perfect time to start a welding program.

The program launched last fall, and for the first semester, students were bused to RCCC’s north campus. But in January, the group found a home in Kannapolis – in the old Carver annex building, next to Kannapolis Intermediate School.

The basement classroom and lab area is simple – a concrete floor with 12 welding booths. While the class can only hold 12 students, Adams said that so far, they’ve received 28 applications from rising juniors.

“It’s a good problem to have but it’s also a sad problem,” he said.

And just because they’re in high school doesn’t mean Huffman goes easy on his students. Adams said the instructor holds the group to a higher standard than what they’d need to pass certification. In welding, average doesn’t cut it.

“He doesn’t want them to settle for average . . . because this could be the difference between a bridge collapsing or not collapsing,” Adams said.

The program provides most of the equipment for students, but requires students to buy their own jackets and gloves. In the classroom they learn how to blueprint, talk about their projects and how to go about them, study math and discuss the importance of soft skills like being on time.

“They’re not that happy about the classroom time, but they love the hands on,” Huffman said.

He said the community has been behind the program “110 percent,” and Adams hopes that the students will be able to do work-based learning or internships within the community.

“That’s the best way for them to learn,” he said.

“These kids are outstanding,” Huffman said.