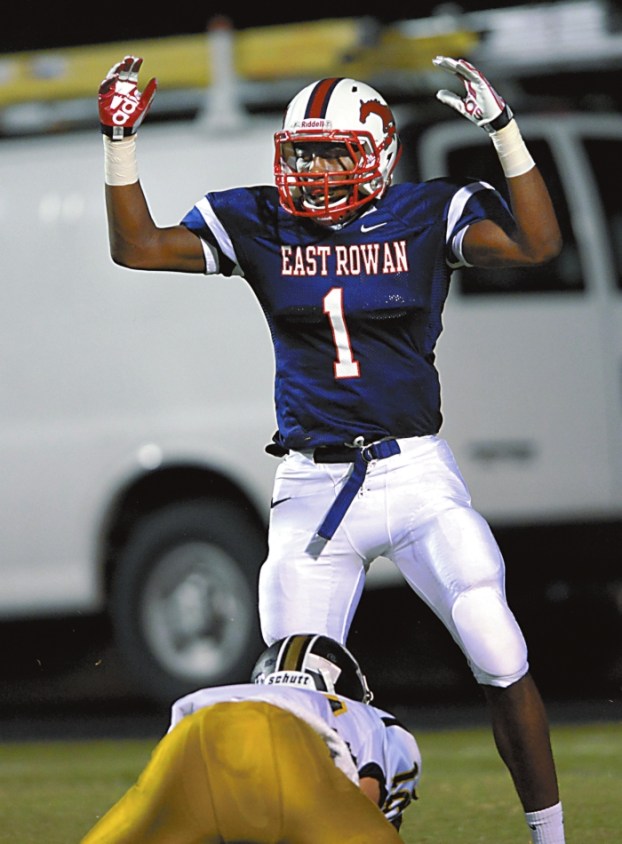 GRANITE QUARRY — East Rowan senior Naquis Caldwell put together a jaw-dropping highlight tape that would make Superman envious.
There were one-handed catches over the middle. There were leaping grabs against double-teams. There were tackle-breaking runs to daylight, and there were hustling downfield blocks to spring teammates for touchdowns.
East football coach Kenneth McClamrock believes Caldwell was the best wideout, when you consider blocking as well as pass-catching, in the South Piedmont Conference. There’s no doubt he was one of the best. He was All-SPC as well as All-Rowan County.
“He’s got the size and he’s got the length — he’s got everything you need to play football at a high level,” McClamrock said.
There were bursts of brilliance when Caldwell also was one heck of a basketball player for East. In the 2013 Sam Moir Christmas Classic, as a sophomore, Caldwell poured in 52 points in two dazzling days against West Rowan and Carson. But that turned out to be his career highlight on the hardwood.
His junior season was crushed by the flu and a bum shoulder. His senior season was interrupted by a knee injury.
Still, at a sturdy, athletic, 6-foot-2, 180 pounds, Caldwell has the look of a future D-I player. Besides the frame, he has the wheels and the hands to be big-time.
But he’s not there yet. He’s going to take a 3,000-mile detour first.
“I talked to a lot of schools and I had some offers from the D-II schools,” Caldwell said. “I just think the junior college route is the best way for me to go at this time. I’ve got some big dreams. I want to play Division I football.”
Caldwell signed recently with Ventura College. That’s in sunny southern California if you’ve never heard of it. Ventura won eight games last fall, including the Beach Bowl — that’s the Beach Bowl, not the Peach Bowl — and any school that plays in something called the Beach Bowl can’t be a bad place to go.
“They’ve got some deep and rich history at Ventura,” McClamrock said. “They throw it around.”
Ventura doesn’t mind the forward pass. Ventura’s scores look like Arena Football. Ventura’s Pirates won a 59-58 game last season and they pulled out another one, 54-48.
“They run about 80 plays a game and they throw the football,” Caldwell said. “They were looking for a big receiver who can go up and get the ball and they saw my tape.”
While the Ventura coaching staff is a long way off, Caldwell said he communicates with the coaching staff almost daily.
“They’re good guys,” Caldwell said. “They’re always checking up on me.”
Ventura head coach Steve Mooshagian has credibility. He’s been a D-I offensive coordinator at schools such as Pittsburgh and he spent four years in the NFL as the receivers coach for the Cincinnati Bengals. Mooshagian coached, among others, Chad Johnson and Carl Pickens.
Mooshagian’s son, Bobby, is Ventura’s receivers coach, so Caldwell is going to a school where the receiving corps will be a priority. One of Ventura’s current receivers is being recruited by a lot of big-time schools. That impressed Caldwell.
“I believe if I play well out there, I’ll get a shot to do great things,” Caldwell said. “It’s a long way, but I think that could be a good thing. There won’t be a lot of distractions, just football and school, and I’ll make the best of it.”
In two varsity seasons, Caldwell caught 65 passes to rank seventh in East history. He was only the sixth Mustang to reach 1,000 career yards in receptions and he snagged 14 touchdown passes.
The tools are there to make his mark. Now it’s up to Caldwell.

From staff reports Peyton Greene struck out 14 batters (with no walks) and led West Rowan’s softball team to a... read more