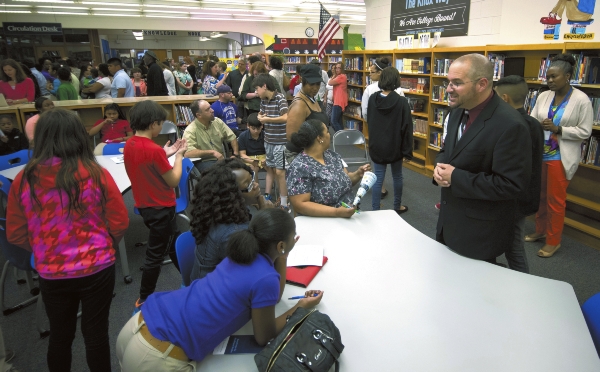 The cast of Junie B. Jones The Musical, rehearses at The Norvell.
JON C. LAKEY / SALISBURY POST

When residents want to show Salisbury off to visitors, we take them through downtown and the historic districts. We talk about our four colleges and high-speed broadband. And we often brag on our arts and nonprofit community, thriving because of the incredible giving spirit found in the city.

Imagine sharing the city’s strengths with people all across the United States. As a finalist in this year’s All-America City competition, Salisbury has an opportunity to raise awareness of the good things going on in this city.

And it’s not just the pretty stuff on the surface. The city’s application focuses on programs that are working to help Salisbury children boost their academic performance, their health and their creativity. Committee members became aware, as the application was coming together, of the wealth of local programs dedicated to helping children. As required for the competition, the committee had to narrow its focus to three programs, and it chose these: Knox Middle School’s co-principalship and other innovations; the Fit for Motion partnership between the YMCA and Novant Health Rowan Medical Center; and the Norvell Theatre, the youth component of Piedmont Players.

The focus on youth is timely. Salisbury leaders are intensely aware of the challenges the city’s young people face, especially disadvantaged youth. City Council members are doing all they can, as officials and community volunteers, to make sure all children have hope and opportunity.

Mayor Karen Alexander has been working hard with her committee to fine tune Salisbury’s application. The benefits of being named an All-America City go more deeply than most people realize. The National Civic League sponsors the competition as a way to bring together people from high-achieving communities to network and discuss new ways to address age-old municipal problems. Salisbury team members have information to share and are eager to learn about other cities’ innovative solutions.

National attention comes with being an All-America City, a boost for recruitment of industry, jobs and investment. The National Civic League says All-America City status has helped cities attract new businesses and retain existing ones. Winners have also seen an increase in tourism and grants.

The city is seeking sponsors for the trip to the final competition in Denver, Colo., on June 17-19. Salisbury’s team will include young people from Knox, the YMCA and the Norvell, as well as the Mini Funk Band. That’s if all goes well; expenses come to about $1,000 per child. People and businesses who want to help fund the team’s travel should send a check (payable to Salisbury All-America City) to Rowan County Chamber of Commerce, P.O. Box 559, Salisbury, NC 28145-0559.

Whether Salisbury wins or loses, the young people who make the trip are in for an adventure. They will come home feeling proud of their city — and vice versa.

Lynch to trans community: I’ve got your back

Washington Post “As Americans, we respect human dignity, even when we’re threatened,” which is why, President Obama said in his... read more