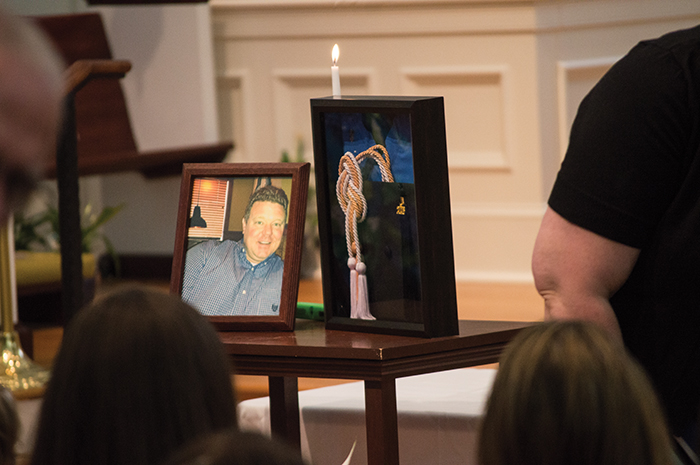 Josh Bergeron / Salisbury Post - A picture of the late Chad Kirkman, a Rockwell resident, sits on a table during a graduation ceremony for Rowan Cabarrus Comunity College's nursing students.

Chad was a father, a husband, a former pilot, a North Davidson High School Knight and Rockwell resident. When Chad took his own life in February at the age of 46, he was a nursing student at Rowan-Cabarrus Community College. He was done with his course work and only needed to finish clinical work before graduation, said Emily Ward, the college’s director of nursing.

On Wednesday, the school honored 42 students who had completed an associate’s degree in nursing. They honored Chad, too.

“Even though he isn’t with us, he is still part of our family,” Ward said.

Chad’s picture sat on a small table at the front of the room, and his widow Traci sat with other family members just a couple yards away. Chad would have been the 43rd member of the graduating class, and Traci found it tough to hold back her emotions as Wednesday’s ceremony proceeded.

“He was very driven, funny, willing to help anybody through anything, neighbors would call and he would just take his tools and go help,” Traci said, holding back tears. “He never knew a stranger.”

Traci said she met Chad during a summer chemistry class at the University of North Carolina at Greensboro. They were lab partners.

“We used to always think that was ironic — that we met in chemistry,” she said.

Traci went on to graduate from UNC Greensboro. Chad graduated from Guilford Technical Community College. In 1994, Chad and Traci got married.

For 20 years, Chad was a pilot for US Air and DHL. He was a member of the Airlines Pilot Association and the Blueberry Wildlife Club.

When the company he worked at closed, Chad decided to go back to school.

“Even when he wasn’t going through a violent episode, when he was relatively calm, the way he was acting was just not normal,” Austin said. “It was down to the little details, like how he worded his sentences wasn’t right.”

At times, Traci said, Chad didn’t know who he was or where he was.

“He was just really lost and sick,” she said.

Traci said Chad was admitted to and released from a hospital. She said he continued acting strange, and family members repeatedly tried to get Chad to seek medical care.

In February, Chad allegedly attacked a Rowan-Cabarrus Community College instructor, assaulted his wife and took his own life, shooting himself at his home in Rockwell.

Since Chad’s death, life has been understandably difficult for Traci, but she said the community has rallied to provide support for her family. She said Chad’s inclusion in Wednesday’s graduation ceremony was especially meaningful. At the conclusion of Wednesday’s ceremony, Chad’s classmates shared condolences and words of support with his family.

“It’s very special,” she said. “It shows how much they cared for him, and conversely he cared for them. They were one, big family, you know?”