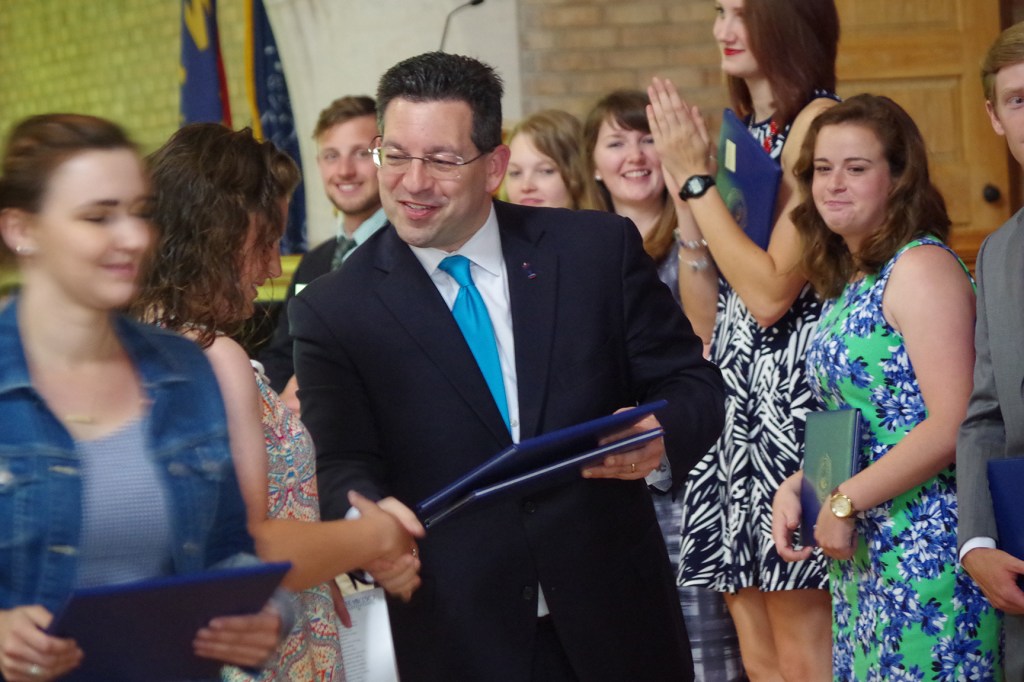 Catawba College President Brien Lewis will step down at the end of the 2019-2020 school year.

SALISBURY — Members of the Catawba College community gathered at annual Awards Convocation on April 21 to recognize and celebrate student scholastic achievements. The event was held in Omwake-Dearborn Chapel to present awards recognizing excellence in specific academic disciplines and to honor award recipients who demonstrate the four qualities noted on the college seal: scholarship, character, culture and service.

As is the tradition at Catawba, awards distributed were eco-friendly, made of Catawba blue, 100 percent recycled glass to symbolize the college’s commitment to sustainability.

In another Catawba tradition, the outgoing Student Government Association (SGA) president, Justin Burroughs, of Salisbury, was presented with a gavel, awarded to the retiring president at the end of the academic year. Burroughs served as SGA president during the 2015-16 academic year. Other outgoing SGA executive officers thanked for their service included Treasurer Caroline Graham, of Salisbury.

Service to the Community & Leadership Awards

Anna Beth Carter, of Mocksville shared the Frances Decker Wentz Award with another student. Established by the Corriher-Linn-Black Library staff in honor of the late Frances Wentz, the award is presented annually to an upper class student or students who have demonstrated a real concern and aptitude for theory and practice of library science and service.

Dr. Charles McAllister, a professor of history, was the recipient of the Kenneth Clapp Tri-Delta Award. Established by the Class of 2000 in recognition of the work of Dr. Ken Clapp, college senior vice president and chaplain, it is presented annually to a member of the faculty or staff who demonstrates dedication, devotion and dependability.

Thirteen inductees into Who’s Who among Students in American Universities and Colleges were announced. Nominated by members of the college community and selected by a committee of faculty and students, these students are active leaders and scholars on campus. They include Johnathon Christian Boles, of Salisbury; Kathleen Marie Burris, of Mount Pleasant; Alex Thomas Lee, of Salisbury; Trevor Joseph Loudin, of Salisbury and Carley Blake Tysinger, of Lexington.

The President’s Award for Community Service was presented to Dr. Cheryl Peevy, a professor of modern foreign languages. The award is given annually to a member of the campus community who has distinguished him or herself in significant service to the local Rowan-Salisbury community. The recipient is selected through nominations from the faculty and staff with final selection from the nominations being made by the college president.

Members of Catawba’s team who participated in the N.C. Independent Colleges and Universities’ annual Ethics Bowl this year were recognized with certificates of appreciation. They included Gavin Wooten, of Lexington. The Catawba team was coached by Dr. Norris Feeney, an assistant professor of politics, who also served as the coordinator for the team.

Lauren Gaskill, of Salisbury received the Rebecca H. Frantz Essay Prize this year. This prize is given by an alumnus, Edwin Nance, of Altoona, Pennsylvania, in memory of the mother of three former Catawba College students. It is awarded annually to the writer of an essay judged by faculty to be the most original.

The Martha H. Morehead Award, presented for the outstanding single work – poem, short story, or graphic contribution to “The Arrowhead” during the year with the recipient selected by the English Department, went to Maria Adkins, of Salisbury.

The Elisabeth Scranton History Award was presented to Sarah McNeill, of Salisbury, and Ethan Pethel, of Kannapolis. It is given in honor of a former professor of history to the student(s) who has attained the highest academic average during his or her senior year and who represents the ideals of liberal scholarship in the area of history.

Brooke Baumgarten, of Salisbury, was presented the Chemistry Prize. This award is given annually to a student(s) selected by the chemistry faculty who, in their opinion, best represents the qualities of good character, overall scholarship and excellence in chemistry course work.

Danielle Mauldin, of Kannapolis shared the Shirley L. Haworth Prospective Teacher Award with another student. It is presented to education majors or minors who have demonstrated outstanding potential as a teacher based on classroom observations. The recipient(s) is chosen by the Department of Teacher Education faculty.

Kathleen Burris, of Mount Pleasant, was the recipient of the Roberts Senior Psychology Award. It is given annually to a psychology major who has been judged by graduating psychology majors as having made an outstanding contribution to the various activities of the Psychology Department.

Awards of Special Merit and Achievement

The Algernon Sydney Sullivan Award was given to Johnathon Boles, of Salisbury, and Dr. Paul Baker, a professor of mathematics. A committee of students and faculty choose both a student and a staff member annually to receive this award. It is given in recognition of fine spiritual qualities practically applied to daily living and with the belief that these persons will uphold the spiritual standards of Catawba by their noble characteristics. The award was established by the New York Southern Society as a permanent reminder of the noblest human qualities expressed and followed in the life of its first president Algernon Sydney Sullivan.

The 2015-2016 Staff Member of the Year is Mrs. Sharon Newsome, administrative assistant to the Dean of Students. This award is presented annually and selection is made by a popular vote of the students.

Dr. Norris Feeney, an assistant professor of politics, was selected as Professor of the Year for 2015-2016. The recipient, who is chosen by a popular vote of the students, demonstrates the best in classroom rapport, evidence of concern for students, and intellectual stimulation.

Chad Lewis, a systems administrator/developer in the Information Technology Department, was honored as the recipient of the Louise Tucker Staff Council Award. The award is given to a staff member who demonstrates an outstanding work ethic and performance in their area, with nominations made by members of the faculty and staff and the recipient selected by a vote of the Staff Council. The award is given in memory of former employee and alumna Louise Tucker ’44.

The President’s Award for Staff Excellence was shared by Rodney Rymer, director of systems/networking in the Information Technology Department, and Steffanie West, assistant director for Admissions operations. The award is given annually to a member(s) of the college staff who has distinguished him or herself in achieving excellence in job performance and who has contributed to strengthening of community spirit on campus. The recipient is selected through nominations from the entire faculty and staff, with a final selection from the college president.

Dr. Jay Bolin, an assistant professor of biology, was the recipient of the Swink Prize for Outstanding Classroom Teacher. The selection was made by the Faculty Senate to a member of the faculty judged to be an outstanding classroom teacher. The award was created by a gift from the late Hearne Swink, former Rowan County resident, official with Cannon Mills Company, and friend of the College.

Dr. Sheila Brownlow, a professor of psychology, was the recipient of the Trustee Award for Outstanding Contribution to the College, presented to her by Bill Graham, vice chair of the Board of Trustees. Dr. Brownlow is the director of the First Year Experience and is involved in organizing Preview Days and coordinating First Year Seminar. She was also very active in the SACS-COC accreditation process, including writing important sections of the institution’s report that dealt with student assessment and outcomes. In the past, she was the longtime director of the college honors program and chaired the faculty’s academic policies committee.

The Trustee Award is given annually to the person or persons judged to have made an outstanding contribution to the institution. The recipient is recommended by the Catawba Faculty Senate and endorsed by the Board of Trustees’ governance committee.