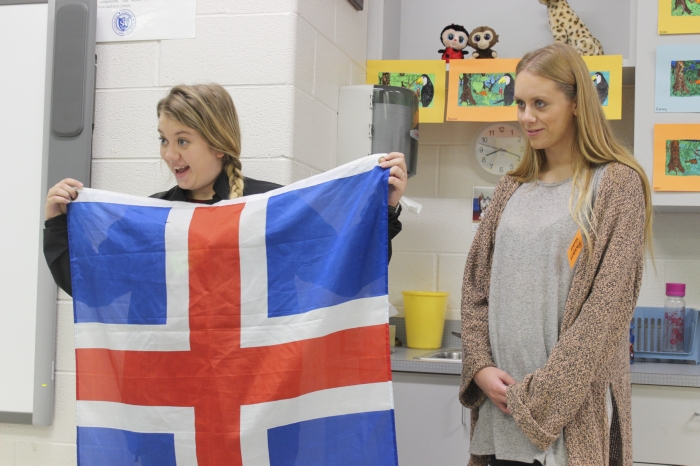 “We’ll tell you about our country, Iceland,” said Malen, a Catawba freshman and communications major. “It’s very beautiful and we’re very proud of it.”

As the college students unrolled the Icelandic flag and asked the second-graders what the flag’s colors represent, the second-graders’ eyes lit up and hands shot into the air. This was a moment the young students had been researching for and greatly anticipating.

Malen and Gudny’s visit was part of preparation for Salisbury Academy’s Olympics-themed Field Day, in which each class is assigned a country to represent. To inject a deep cultural understanding and appreciation for other countries into the event, Kim Smith and Dr. Maria Vandergriff-Avery — both of whom are Catawba College employees and parents of students at Salisbury Academy — had the idea this year to partner 11 of their international college students with the academy’s classes.

As the Icelandic visitors’ presentation continued, there was both interest and humor as Malen and Gudny shared everything from Iceland’s Viking history and independence from Denmark in 1944 to the landscapes of volcanoes, glaciers, hot springs and waterfalls.

“I’m actually working at the Blue Lagoon in Iceland this summer. It’s a geothermic pool,” said Malen. “I’m really excited about it.”

Another highlight was the sharing of Iceland’s love of fish (fish, fish and more fish), cool weather, soccer, handball, golf and walking instead of driving.

“In Iceland we love to walk,” said Gudny, a Catawba sophomore and psychology major. “We walk to school, really everywhere.”

Salisbury Academy students brimmed with curiosity and inquired about Iceland’s language, holidays, landscapes and even the animals. They were also curious as to how best to represent the country of Iceland in the upcoming Salisbury Academy field day on June 1.

“We’re thinking about wearing white T-shirts with the flag of Iceland on them, carrying a flag, and making a mountain with a white cap on it,” said Salisbury Academy second-grader Kennedi Fisher. “I’m excited for it.”

Other countries to be represented at Salisbury Academy’s field day — all of which have Catawba College student ambassadors — include Australia, Bermuda, Germany, England, Lithuania, South Africa and Egypt. Salisbury Academy students will dress in their assigned country’s colors, sport the flag and share their new-found cultural knowledge through music, dance and artwork.

“We’re thrilled about the deep cultural connections being made and thankful to Catawba College’s international students,” said Beverly Fowler, head of school for Salisbury Academy. “It really is a small world after all.”