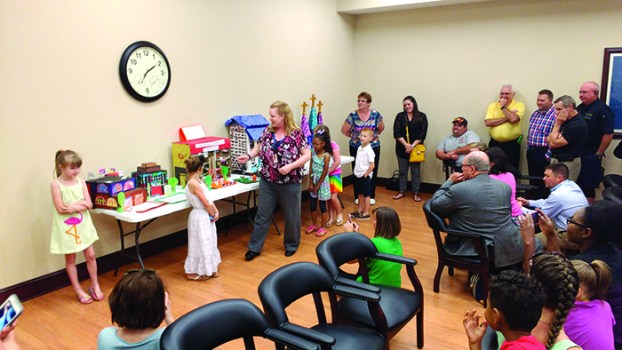 China Grove board gets a lesson from first graders

CHINA GROVE — Town board members on Tuesday got a glimpse of the town’s future from a group of its youngest residents.

First graders from China Grove Elementary School during Monday’s China Grove Town Council meeting showed off small models of buildings the town might see in the future and some that are currently present. Examples of the buildings included the “Fun for Everyone Mall,” “All You Can Get Bank and Grocery,” “McDonalds of the Future” and the China Grove Roller Mill.

China Grove Elementary School Principal Lee Anne Thomas said first-grade classes learned about what the town looked like in the past, its current appearance and developed ideas for the future. Thomas said the project was part of problem-based learning. One goal was for the students to figure out how to make a small town better.

The “All You Can Get Bank and Grocery” included both of its namesake items in one building. The “Fun for Everyone Mall” contained a food court, fitness center and tree house. The students proposed putting the mall where No Way Jose’s currently sits. Thomas, however, said the students planned to give No Way Jose’s a spot in the mall.

A student stood in front of each building model during Tuesday’s meeting and presented the projects.

• The Town Council briefly talked about being ranked the 19th safest city in North Carolina.

A website called Safewise released rankings of every North Carolina city in April. Cornelius and Davidson, located in Mecklenburg County, were the only nearby cities on the list to rank higher than China Grove.

Mayor Lee Withers said the ranking is something China Grove should be proud of, “considering other municipalities in the county are some of the worst.”

The China Grove Town Council’s resolution said Rogers “exemplified the meaning of a dedicated public servant.” The resolution states that Rogers “exuded a certain warmth and friendliness with his infectious smile, and his easy-going nature.”