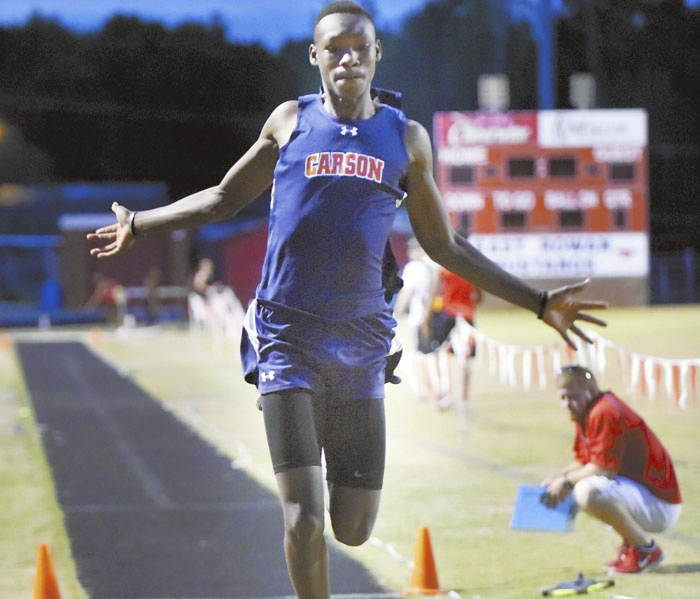 Wayne Hinshaw/For the Salisbury Post Carson High School’s Brendon Westbrook wins the triple jump at the Rowan County track and field meet in April. Athletes such as Westbrook reminded photographer Wayne Hinshaw of the dancers in ‘The Nutcracker’ and other ballets. They both are ‘so artistic and so coordinated with their muscles tight and tense,’ he writes.

While photographing the Rowan County track and field meet recently, it struck me how beautiful and artistic these young high schoolers are as they make their jumps, turns, twists, throws and runs in competition.

Having photographed the dancers at the “Nutcracker” ballet performing their jumps, turns, twist and lifts, how similar the dancers and athletes are. Before you jump me, questioning if I think dancers are athletes, I must say I think they are. They, too, have to be strong and conditioned to do their dances. They have to have endurance from long hours of practice just like the track athletes.

Shooting still photos and freezing the motion of both the dancers and athletes in mid-air, both are so artistic and so coordinated with their muscles tight and tense, with maybe a touch of perspiration, or sometimes more than a touch, adding glow and highlights to their bodies.

Doing research on track athletes and dancers, I find that the likeness between the track athletes and ballet dancers must stop at this point. Running can bulk and tighten your muscles, while you need elongated, flexible muscles for ballet. So much for my theory of comparing the two venues.

To the ancient Greeks, the early Olympic type games were a major influence on their artistic expression at the time. Poets wrote poems about the athletes, sculptors created sculptures. Musicians played music while the athletes competed. The natural human body, in its movements while competing with ones’ muscles and bodies looking their best, were models for artistic expression.

The early games were, of course, pagan festivals for the men only, where the Greeks worshiped their gods offering sacrifices to begin the games. The Romans under Emperor Theodosius I ended the Greek games in AD 393 when he decreed Christianity as the state religion, and for 1,500 years there were no games.

In the early games, long jumpers would carry stones or lead weights as they jumped to increase their momentum, running forward then dropping the weights to land. Our Rowan long jumpers had to get their momentum from their running speed before the jump. Some of the jumpers, like ballet dancers, fold their legs under them while in the air. Some keep them extended. Some throw their arms upward over their heads like Carson High’s Brenden Westbrook, while some throw them to the side before splashing into the white sand pit. (Westbrook is the county champion long jumper and triple jumper.)

To the Greeks, discus throwing was an important event to see and test the contestant’s rhythm and precision in his foot work. They were not as concerned with pure strength as with the form. Maybe they had the correct idea in this. Interestingly, in the girls’ county meet, the champion is Jocelyn Lowe from East Rowan. She was the smallest of the contestants, with no apparent upper shoulder strength but great speed in her spin and foot work. Her fancy, speedy foot work and the bounce to her jump would work on the ballet stage. (She played point guard in basketball.)

The Greeks had 4 types of races, while we have 12 or more races with relays.

The Greeks’ second race was to the end of the stadium and back again. Maybe these races were about 400 meters. In the third Greek race, they would run 18-24 laps around the stadium or about 3 miles. Our 3200M is about 2 miles.

The fourth Greek race was with the runners in full armor and sword as preparation for battlefield.

Here comes the big difference in the Greek games and our high school meet. The Greek competition was in the nude. The weather was warm. They added Olive Oil to their bodies to make their skin smooth. After all, it was a celebration of the body.

There was one saving grace to the nude competition, unless you were a peeking married woman. Married women were not allowed to watch the games, and if they did, they would be thrown over a cliff and killed.