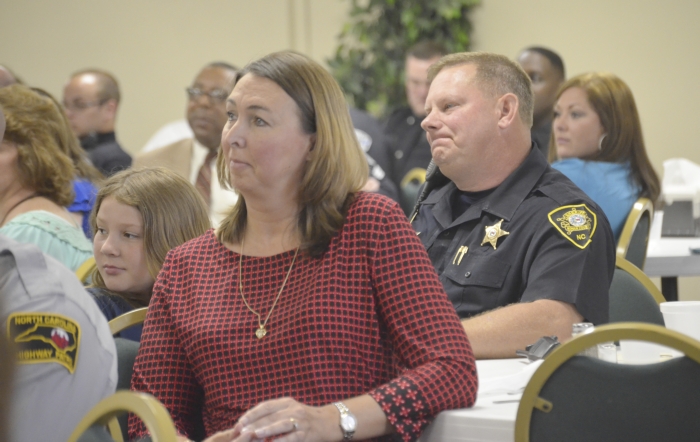 Rowan County Sheriff’s Deputy Tommy Cato was presented the Paul G. Wilson Award on Tuesday during the annual Respect for Law breakfast, which recognizes local law enforcement. The event was sponsored by the Salisbury Lions Club and held at First Baptist Church. Cato is seated with his wife, Wendy. Shavonne Walker/Salisbury Post

SALISBURY — It only takes 18 seconds to change the perception the community has of law enforcement, said former FBI agent Quentin Williams.

Williams, an attorney, author and international speaker shared with a room of law enforcement officers about an experience he had with with Rhode Island Police where he was mistakenly arrested. Williams said even after the ordeal, it would’ve made a difference if those officers had taken the time to say “sorry” about the mix up.

He said it would’ve taken the officers just 18 seconds to make it right. He congratulated the local officers, who were being named officer of the year for their respective departments, on being the type of officers that make a difference.

“The voice is the most important tool that law enforcement have. The people in this room have the ability to use that tool to bring communities together,” Williams said.

Tommy Cato, a former highway patrol trooper and currently a Rowan County Sheriff’s deputy received the Paul G. Wilson award. Wilson began the breakfast through the Optimist Club. The award honors the officer who embodies the spirit of the late Paul Wilson.
Sheriff Kevin Auten presented Cato with the award, saying he was the kind of officer who would take that 18 seconds to make an impact. In fact, Cato unknowingly lifted the spirits of a motorist who was passing near East Rowan High as Cato was assisting with student traffic. The date was the day before what would’ve been the motorist’s mother’s birthday. The mother had died four years prior and that date always brought a sense of gloom and depression. But Cato’s smile and “good morning” greeting brought comfort.

The following officers were honored:

Carpenter was hired in 2014 by the China Grove Police Department and prior to that was a reserve officer with Rockwell Police. He is a school resource office at Carson High.

Harper is a military veteran who began with the Kannapolis Police Department in 2010 as a patrol officer. He currently works in the department’s criminal investigations division.

Young has been with Landis since 2007. Chief Bob Wood said Young is a very good asset and is dedicated to the job.

Sloop is an East Rowan and Applachian State University graduate who double majored in finance/banking and insurance risk managment. Prior to returning to Rowan County, he worked in Statesville for two years.

Shue began his career as a 911 dispatcher and then worked as an Alcoa-funded deputy working on the Yadkin River. He’s also worked with the Salisbury Police Department and has for several years raised funds for Toys for Tots.

Mesimer is an East Rowan graduate and began his career in 1993 as a detention center officer where he worked for 13 years. He heads the department’s evidence department and assists with evidence collection at crime scenes.

Brooks is a Livingstone College graduate who began at the East Spencer Police Department before joining the Salisbury Police Department, where he is a member of the Honor Guard. He’s helped organize the Police Athletic Team and worked with the Spanish Coalition for the city of Salisbury.

Hogan has been with Spencer for two years where she began a coat collection and distribution program. She’s also been involved in a summer feeding program and volunteers to pack book bags for the Food For Thought backpack feeding program.

Hatfield, a 14-year Navy veteran, began with the VA Medical Center eight years ago. He never complains, and comes in early and stays late, said his peers, who voted him as officer of the year.