A tribute for Ralph: ‘He loves you so much’ 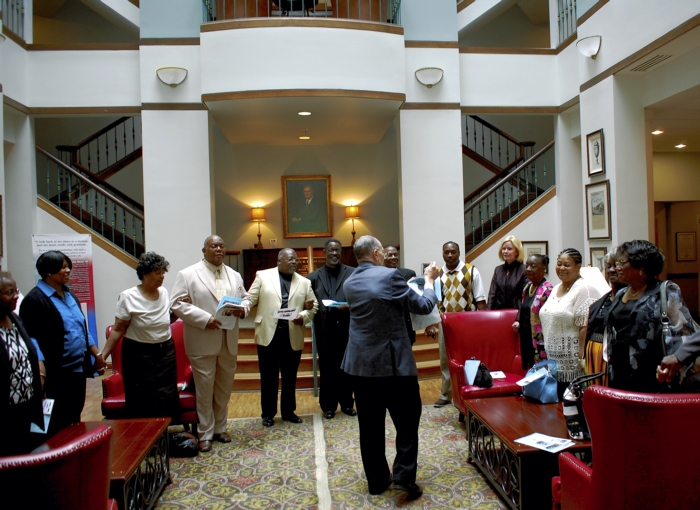 The Rev. Dr. Fleming Otey, center, takes a video with his cellphone of some of the members of the Salisbury-Rowan Ministerial Association who gathered at Ketner Hall on the Catawba College campus Tuesday to honor Ralph Ketner, whose portrait can be seen on the center back wall. Mark Wineka/Salisbury Post

SALISBURY — An ailing Ralph W. Ketner could not make a luncheon meeting in his honor Tuesday, but he was there in spirit. Boy, was he.

Mayor Karen Alexander read a resolution proclaiming Tuesday as Ralph W. Ketner Day in Salisbury. Numerous people offered remembrances of the Food Lion cofounder, and the audience enjoyed a 50-minute documentary on the American success story that he represents.

The attributes that kept being attached to Ketner included words such as entrepreneurship, stewardship, caring, competitiveness, giving and encouragement.

Linda Ketner, Ralph’s daughter, said she and her father spent the last two weeks trying to get him well enough to attend Tuesday’s meeting of the Salisbury-Rowan Ministerial Association, which wanted to honor a man who has given much to the poor, homeless, orphaned and the community in general.

“We couldn’t think of anything better to do today than have this program,” said Bishop W. Ronald Hash, president of the group.

Tuesday’s gathering was held at Catawba College’s business school, Ralph W. Ketner Hall, where Ketner has had an office as executive-in-residence since his retirement from Food Lion in 1991.

But Linda said her father had a setback last week. His heart is beating a bit too rapidly, and his breathing is labored, Linda said of her 95-year-old father. But his spirit remains as bright as the sun, she said.

“He is not afraid of anything,” Linda added.

A Charleston, S.C., resident, Linda Ketner has been with her father the past two months, a period which included a stay in hospice for Ketner. But along with a better diagnosis from his doctors, Ketner rallied and is now a resident at Trinity Oaks.

“Dad said this morning, ‘Don’t count me out,'” Linda said.

When it became public that Ketner had gone to hospice, Linda Ketner said he received 1,432 cards, letters and emails before she stopped counting. “They are so full of love,” she said, describing how former employees told Ketner things such as how their Food Lion profit-sharing paid for college educations, or bought them homes

He heard from a childhood friend who had worked with Ketner when they both sold ice cream for Dan Nicholas for 25 cents an hour. Linda said there were many other beautiful memories.

“He loves you people so much,” she told the audience. “He loves the community so much.”

Singer/author Marie Norway said she wished Ketner could have been present because she chose her musical selection, “One Step at a Time,” especially for him.

A special guest Tuesday was Ralph’s sister, Dot Swing, who is 91.

Others in attendance included N.C. Cultural Resources Secretary Susan Kluttz, who is a former Salisbury mayor, and Kluttz brought with her another former mayor, Bill Stanback.

From an economic standpoint, what Ketner did through Food Lion was bring thousands of jobs to Salisbury, besides putting the city on the map nationally and internationally, Kluttz said.

But he also was a blessing to the downtown and historic preservation efforts in Salisbury, Kluttz said, reminding the audience of Ketner’s purchase of the former Wallace Building, its restoration and transformation into The Plaza. He then gave the building to the city of Salisbury.

It was a big risk, a huge expense and a beautiful gift to Salisbury, Kluttz said.

Food Lion’s success led to a lot of individual wealth in Rowan County among the grocery chain’s investors. Those people used their Food Lion fortunes to make huge contributions themselves to the community.

“He has created a culture of giving in this community like no one else,” Kluttz said.

Elizabeth Cook, editor of the Salisbury Post, described Ketner as the math wizard who came up with a pricing strategy, implemented in 1968, that soon made the tiny Salisbury-based Food Town the fastest growing grocery chain in the country.

Ketner preached low prices and controlled costs and he stressed that the company’s priorities, in order, were customers, employees and stockholders.

By 1983, when Food Town had become Food Lion, the company reached $1 billion in sales. With the low-pricing formula, the company went from 7 stores to 1,000 stores in a 25-year period.

“It’s not what you earn, it’s what you give,” Ketner said of what became his guiding philosophy. “And you can’t give it until you earn it.”

Linda Ketner said these past two months with her father have reinforced something for her. 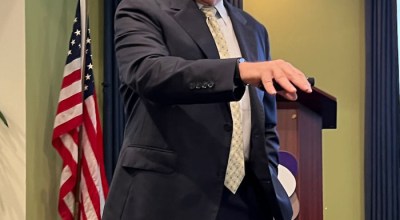