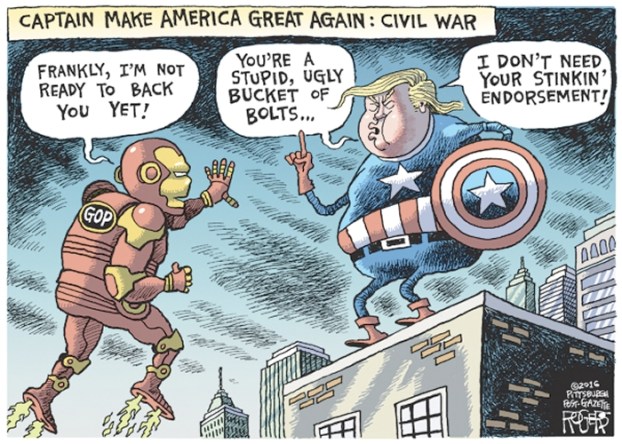 Is Washington ready for Trump?

On Thursday, Donald Trump, the presumptive Republican presidential nominee, goes to Capitol Hill to make either love or war with his party’s establishment in the person of House Speaker Paul Ryan. Ryan quietly said he wasn’t sure he could support Trump as president. Oh, yeah? Trump said loudly he wasn’t sure he could support Ryan as chairman of the party convention in July.

Just as Trump needs to bring all sides together, he’s decided to continue campaigning, against his party. That’s consistent for a man who can live without a friend but not without an enemy. On Sunday, he was asked on ABC News’s “This Week” whether the party needed to be unified. He said: “I’m very different than everybody else, perhaps, that’s ever run for office. I actually don’t think so.”

Since vanquishing his last opponent, Trump has taken the support of those falling in line for granted. Those who don’t are a call to battle. South Carolina Sen. Lindsey Graham said Trump had “conned” Republicans and is “going to places where very few people have gone and I’m not going with him.” Trump called him a “lightweight.”

At the other end are cheerleaders who have hopes of a Cabinet position or the vice presidency. That camp includes the early-on-board New Jersey Gov. Chris Christie, just named transition chief, and former House Speaker Newt Gingrich who said, “If a potential president says I need you, it would be very hard for a patriotic citizen to say no.”

Former Texas Gov. Rick Perry, who once called Trump a “cancer,” has also tried to get his job application moved to the top of the pile, praising the would-be nominee as someone who “loves this country and he will surround himself with capable, experienced people, and listen to them.”

In the middle are the hedgers playing Twister, especially those running for re-election. Sen. John McCain watched Trump win Arizona and pledged his support. Privately, in a tape obtained by Politico, he walked a tightrope over the Grand Canyon, worrying over “the race of my life” with Hispanics “roused and angry in a way that I’ve never seen in 30 years.”

The conscientious objector Ryan is a different matter. Partly the standoff is a matter of style: the man of presumption and prenups, real estate and ridicule having to deal with the altar boy from flyover country who preaches conservatism with a Reagan smile and a raft of position papers.

On substance. Ryan is a free trader and interventionist, Trump an anti-NAFTA isolationist. Ryan favors bipartisan immigration reform. Trump favors mass deportation and a real wall to keep out those coming in from Mexico and a legal wall to keep out Muslims. Ryan is the author of sweeping reforms to save Medicare and Social Security. Trump wouldn’t touch either. He will touch taxes, raising the rate on the wealthy, the biggest apostasy of all.

You never know what Trump is going to do next. Neither does he, apparently. He has demonstrated a lack of impulse control. This is the fellow who, on the eve of clinching the nomination, tossed out an allegation that the defeated Ted Cruz’s father was involved in the Kennedy assassination.

There are tactics but no strategy. Trump believes that his populist uprising trumps Ryan’s leadership.

Most of all, Trump wants to keep the drama going. He will hype the meeting with Ryan like the Tyson-Spinks heavyweight match in Atlantic City. The press will buy it.

And yet, there are two things that could temper Trump. He revealed that if someone likes him he almost always likes them back. That includes autocrats such as Vladimir Putin and even archenemies such as Little Marco Rubio and Lyin’ Ted — once they stop running against him. Senate Majority Leader Mitch McConnell has shown he is ready to make nice. If Ryan makes the least bit of an effort, Trump will emerge praising him.

Second, the art of the dealmaker will kick in. Trump will stop bargaining with himself and bargain with Ryan, who would just as well not go to the convention, staying away with the Bushes, Mitt Romney and many senators. Sensing that, Trump will surely turn on his gifts as a salesman to get him to come.

You can bet that in Cleveland, the show will go on.

Editorial: Caught in the crossfire

The crossfire of lawsuits between the U.S. Attorney General’s Office and North Carolina’s Republican leadership would be comical if it... read more