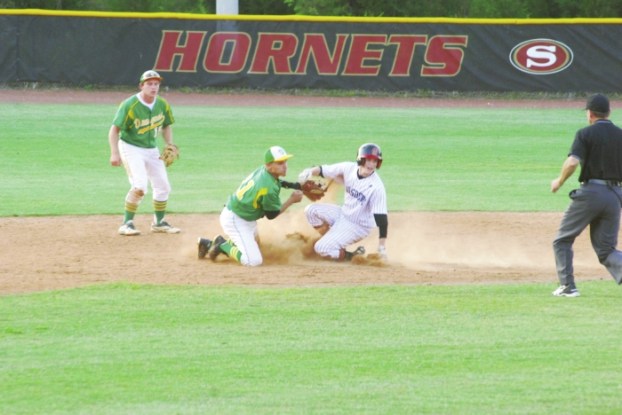 Dennis Davidson/Salisbury Post Salisbury's Joe Steinman steals second base in the third inning of Tuesday night's game against West Davidson in the first round of the state 2A playoffs. The Dragons' second baseman, Derrick Hardin, takes the throw. West Davidson won the game, 4-1. May 10, 2016.

SALISBURY — When two baseball teams play each other four times, there’s not much you don’t know about your opponent.

Still, anything can happen in sports and that’s why they play the games. There’s always that chance that someone will step up or something unique will happen.

Such was the case for West Davidson’s Green Dragons, a 4-1 winner over Central Carolina Conference rival Salisbury, here last night in a 2A state playoff game.

The tables were turned last night, as Mauck turned in a masterful performance, beating both Steinman and Salisbury.

Staked to an immediate 2-0 lead, Mauck confidently kept the Hornets off-balanced, pitching a complete-game six-hitter while walking no one and striking out seven batters.

“Chris Mauck did a heck of a job, I just can’t say enough about that kid,” said West Davidson coach Jason Lemley. “He’s been our go-to guy all year. He’s thrown against Salisbury three times and when we hand him the baseball, he’s going to battle, compete and give us a chance to win.”

Salisbury coach Mike Herndon agreed that Mauck was the key to the contest.

“Mauck was outstanding,” said Herndon, who finished his first year at the helm of the Hornets. “That was the difference. They barreled up some pitches of ours and we didn’t barrel up many at all off him. He was better than us tonight. We faced him three times and got him last week, but he got us tonight.”

Mauck was nicked for an unearned run in the third inning when Alex Yang singled in Joe Steinman, making it 2-1.

In the fourth, Salisbury got the tying run to third base with one out, but an attempted safety squeeze turned into a sacrifice, moving another runner to second base. Mauck then fanned Griffin Myers to end the Hornets’ last legitimate threat.

By the seventh inning, Mauck seemed to be throwing harder than he was earlier in the game.

“My fast ball was just perfect all night,” said Mauck. “I was placing it perfect. It was just there tonight and my curve ball is always there, too. It was a great game and as long as I have my guys behind me, that’s all I need.”

The Dragons scored in the first inning when Jake Adams made Salisbury pay for two early errors with a single that scored two runs.

West’s Austin Gobble doubled in Cason Fowler in the fifth inning for a 3-1 lead. Joe Steinman kept another run off the board when the next batter drilled a shot into deep right-centerfield that looked like an easy double.

However, Steinman made a remarkable driving grab on the warning track.

“What a great baseball game!” said Lemley. “We played some great defense behind Chris, but their centerfielder, Steinman, makes one of the best plays, if not the best one, I’ve ever seen in high school baseball.”

The Dragons returned the favor in the bottom of the seventh inning when after one out, the Hornets tried to rally. Myers singled through the right side and after a nine-pitch at-bat, it appeared that Joe Steinman had followed suit.

But West second baseman Derrick Hardin made a diving stop in the hole, turned and fired to shortstop Daulton Anderson, who stabbed the one-hop throw, getting a force out of Myers.

With the air taken out of the inning, Will Steinman popped out to first baseman Gobble to end the game.

“It’s unfortunate that we were matched up with them in the first round and somebody had to lose that game,” added Lemley.

Will Steinman pitched five innings in defeat but wasn’t as sharp as he was last week against the Dragons. After the tough first inning, he allowed just two hits, but he walked three batters and hit three more.

Herndon had a long post-game meeting with his team and emerged a little misty-eyed.

“I’m proud of our guys,” said Herndon. “I told them, ‘don’t cry because it’s over, just smile because it happened.’

“We came a long way this season,” continued Herndon. “People don’t understand the steps we’ve taken, the things these kids have accomplished. When we were getting hammered, 18-1, early in the season, people might have been saying, ‘no way,’ but we continued all the way to the end and played for a conference championship.”

From staff reports East Rowan and Salisbury are still undefeated in boys tennis but both face their toughest challenges of... read more