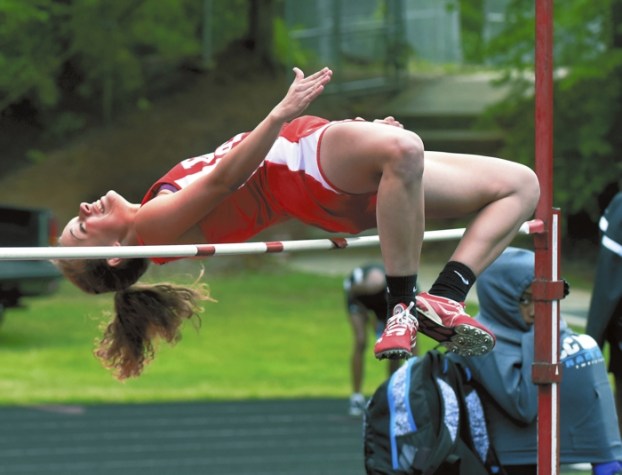 GRANITE QUARRY — Jocelyn Lowe was a four-year varsity basketball point guard for East Rowan, racking up 568 career points, plus 350 assists, which means she was directly responsible for an additional 700 points.
While Lowe paced East in assists four straight seasons, she’d figured out by the end of her junior year that her future as a college athlete was going to be in track and field, not hoops.
“Growing up, I always thought I’d be a college basketball player and I had a great time at East, competing with high-profile basketball players on successful teams,” Lowe said. “But no schools recruited me for basketball. In track, though, there were schools recruiting me.”
Lowe recently signed with Lenoir-Rhyne, which has a strong Division II track and field program. The Bears compete indoors and outdoors in the South Atlantic Conference, where eight of the 12 member schools field women’s track teams. It’s a fast-growing sport.
The Bears have stability with a head coach (Jason Stewart) who’s been in place more than a decade, plus three assistant coaches.
Lowe credited East throws coach Nate Santiago with getting her to take her first serious look at Lenoir-Rhyne.
“I filled out the forms and Lenoir-Rhyne’s recruiting questionnaire online and they contacted me and stayed in touch with me,” Lowe said. “My first visit was supposed to be in January, but it got snowed out. But then I visited in February, and Hickory was a beautiful place. I knew it was right.”
Lowe’s first track experiences came at Erwin Middle School.
“Running events like the 800 and the mile relay, but I’d get so nervous before I was going to run,” Lowe said. “The field events turned out to be better for me.”
Her excellence in field events has given Lowe a split personality with East Rowan track. She’s a jumper/thrower, jogging back and forth from the throws on one end of the stadium to the two jumping stations on the other end.
Her skills in the triple and high jumps aren’t a shock because she averaged 6 rebounds per game for the basketball team as a senior.
What is surprising about Lowe, who is a lean, 5-foot-8 is that her best high school event has been the discus. She’s also done surprisingly well in the shot put.
Lowe was honored as Field Events MVP after scoring 26 points at the Rowan County Championships. She was first in the discus, placed second in the triple jump and took fourth in the high jump and shot put.
“It was great to win the discus against good throwers like (North’s) Chevy Blaire and (Carson’s) Alijuandra Street,” Lowe said. “The MVP was one of the biggest honors I’ve ever had. Field events don’t get much recognition. They’re scattered around the stadium, and everyone is usually watching the runners at the finish line.”
In last week’s South Piedmont Conference Championships, with 10 schools competing, Lowe won the discus, placed fifth in the triple jump and sixth in the high jump. Athletes are allowed to compete in up to four events in a meet, and Lowe sprinted on the 4×100 relay team. She helped the Mustangs place fourth.
“We thought there was a better chance to score points in the relay than the shot put, and it worked out for the team,” Lowe said. “The SPC was a crazy, two-day event. Beautiful on Tuesday, bright sunshine and no wind. Then on Wednesday it was cold and windy with the worst conditions I’ve ever seen for a meet.”
Lowe is a triplet (sister Shelby is a basketball and track teammate). Maybe that helps explain her success in the triple jump.
She has triple-jumped 31 feet, 1 1/2 inches and high-jumped 4-10. She matched her personal-best discus effort with 103 feet, 5 inches in the Rowan County Championships.
While the discus has definitely been her thing as a high school athlete, Lowe realizes she may not have the necessary bulk to sustain that success in college.
“I hope to keep throwing the discus, but I know Lenoir-Rhyne is mostly interested in me for the jumps,” Lowe said. “They have the javelin in college, and that’s also a possibility. It requires speed and good throwing technique. It’s something I might be good at.”
More than one person has told Lowe she could be proficient in the heptathlon, a seven-part event (200, 800, 100 hurdles, high jump, long jump, shot put, javelin) similar to the men’s decathlon. She plans to look into it.
Lowe comes from an Appalachian State-oriented family — her older sister Carmen is a student in Boone now — but she’ll be breaking the family mold as a Bear.
But she’s broken molds before. She’s the basketball player who turned into a track standout.

Prep Golf: East Rowan in hunt for 3A state title

East Rowan’s golf team wasn’t spectacular on Monday at the Country Club of Whispering Pines, but the Mustangs were consistent,... read more