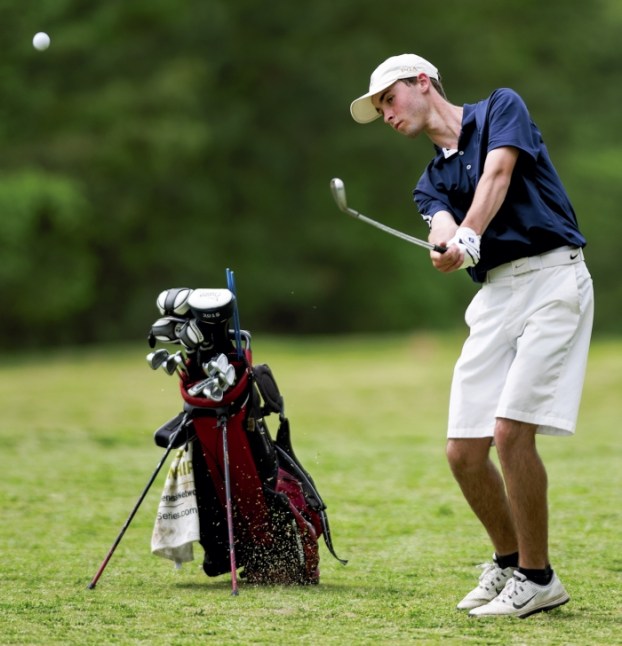 ALLISON LEE ISLEY/SALISBURY POST East Rowan’s Nick Lyerly hits the ball toward the green during the all-county high school golf tournament at the Warrior Golf Club on April 16. East Rowan is leading the 3A Golf Championships. Lyerly led the effort with a 1-under 71 and is in a three-way tie for first for individuals.

Prep Golf: East Rowan in hunt for 3A state title

East Rowan’s golf team wasn’t spectacular on Monday at the Country Club of Whispering Pines, but the Mustangs were consistent, and consistency is what coach Rhett Teems was seeking.
“Steady golf,” Teems said. “That’s all we talked about — play steady golf. And the guys did.”
East finished the first day of the 36-hole 3A Golf Championships at the head of the pack. Obviously, the Mustangs wouldn’t swap placed with anyone, but their halfway lead is precarious. Defending champion Gastonia Forestview, the team that beat runner-up East in 2015, sits three shots back. Waxhaw Cuthbertson is only four strokes behind the Mustangs.
“Forestview is going to come at us, and Cuthbertson has a very strong team, and those are the two teams our guys are going to be paired up with for Tuesday’s round,” Teems said. “A lot can happen. We’re talking about five kids out there and those strokes can add up in a hurry. Still, it’s just awesome to be in first place. We’d hoped to be in this position, and here we are.”
East has five golfers in the competition. The best four scores count each day. All the golfers are starting on the No. 1 hole.
East shot 299 on the first day.
Nick Lyerly, the defending champ, led East with a 1-under 71 and is part of a three-way tie for first in the individual derby. Lyerly shot 36-35. He got on a roll in the middle of his round and posted birdies on 8, 10 and 11. He had an early bogey on No. 5 and made his second bogey on No. 17.
“Nick hit it so well he could’ve scored in the 60s,” Teems said. “He didn’t have many putts fall.”
Senior Logan Shuping shot 37-37 — 74. Shuping made three birdies and stood 1-under after 13 holes, but he made bogeys on 15, 17 and 18 to finish 2-over.
“You know Nick and Logan are going to shoot around par and they did what they always do,” Teems said. “But the course was playing tougher later in the day when they were on the back nine. The wind picked up, and there were some very slick greens. It didn’t take much to knock a putt 7 feet past the hole and leave a tough putt coming back.”
Sophomore Bryson Sprinkle had the key round for the Mustangs. He shot 37-37 — 74 and is tied with Shuping and several others for ninth place. Sprinkle was exceptional on the four par 3s, where he carded two birdies and two pars.
“Bryson putted great, and his round was huge,” Teems said. “He had a lot of one-putt greens, got up and down an awful lot. When he had a putt from 10 feet and in today he made it, and that makes all the difference. He came through 100 percent.”
Christopher Queen shot 80 to round out East’s counting scores. Queen shot 38-42. He made a birdie, but he also had a double bogey.
Ben Rollins’ 42-39 — 81 included a pair of double bogeys.
As far as UNC Greensboro commit Lyerly’s chances of repeating as individual champ, Teems is optimistic. Shuping and Sprinkle also aren’t out of the picture.
“There are 20 golfers that could win the individual,” Teems said. “It’s that close.”
As far as the team title and the rings, that’s been the goal for the Mustangs since this time last year.
East will tee off considerably later today, with all five golfers, starting with Rollins, stepping into the tee box shortly before noon. The round won’t end until about 5 p.m. Lyerly will be the last Mustang to finish.
“It’s going to be a nail-biter all the way,” Teems said. “If all five guys play steady golf, we can get it done.”
•••
NOTES: Competing as an individual, Concord’s Walker Cress shot 73. Cress’ eventful day included four birdies and five bogeys. … Salisbury’s Alex Antosek is competing as an individual in the 2A State Championships. His 78 put him in a tie for 13th after the first day.

Baseball, softball and girls soccer playoff seeds and pairings were announced by the NCHSAA on Monday. Most games will be... read more