Editorial: Caught in the crossfire 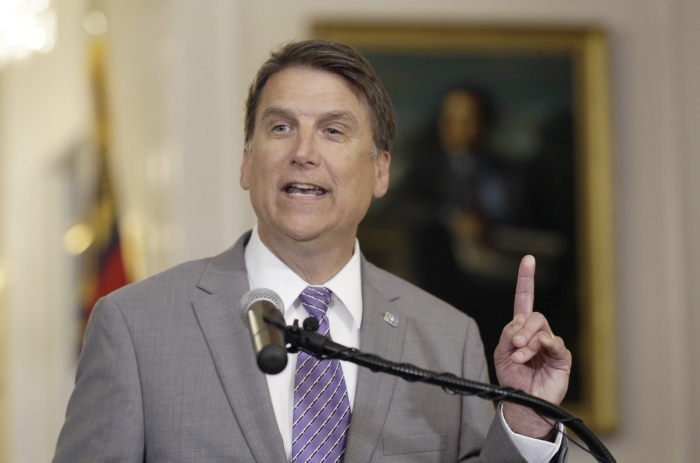 Gov. Pat McCrory speaks during a news conference in Raleigh on Monday. McCrory's administration sued the federal government Monday in a fight for a state law that requires transgender people to use the public restroom matching the sex on their birth certificate. (AP Photo/Gerry Broome)

The crossfire of lawsuits between the U.S. Attorney General’s Office and North Carolina’s Republican leadership would be comical if it were not so dangerous. Innocent bystanders are bound to get hurt.

The bystanders are the people of North Carolina who want state government to focus on spurring job growth and improving public education — people who want the state to be known for its industry and higher education.  Instead, we have a so-called “bathroom law” that is scaring jobs away and teaching children to be afraid of the wrong people.

Also very much at risk are the individuals targeted by HB2. Which bathroom do HB2 supporters think transgender people were using before lawmakers decided to intervene? Valuing their own privacy as much as anyone else’s, transgender people have quietly been using the restroom of the gender they claim, though now and then that got them in trouble.

In March 2014,  a female transgender student was suspended from Central Piedmont Community College in Charlotte for using the women’s bathroom. College officials told her to bring medical documents that prove she’s a female if she wanted to use the women’s bathroom; otherwise, she should stick with gender neutral bathrooms.

Meanwhile, last year UNC Charlotte quietly adopted a policy allowing transgender people to use the bathroom of their choice.

The city of Charlotte passed an ordinance in February to do the same, and that threw the state into turmoil over an issue most people had never contemplated, one that’s far more complex and important than HB2’s supporters considered. Gov. Pat McCrory signed the hastily written bill into law before lawmakers could research the transgender issue or the other measures slipped into HB2, and before the public could weigh in. McCrory succeeded in stopping the Charlotte law before it could go into effect, but he also pulled North Carolina onto the front lines of the debate over transgender issues.

Now we have lawsuits galore. In response to a letter asking him to drop the law, McCrory filed suit Monday against the Department of Justice, asking a federal court to rule that HB2 is not discriminatory. Republican legislative leaders did the same. The U.S. Justice Department fired back with a lawsuit against North Carolina.

How long must this go on and what will it cost the state? North Carolina’s reputation is at stake — caught in the crossfire.