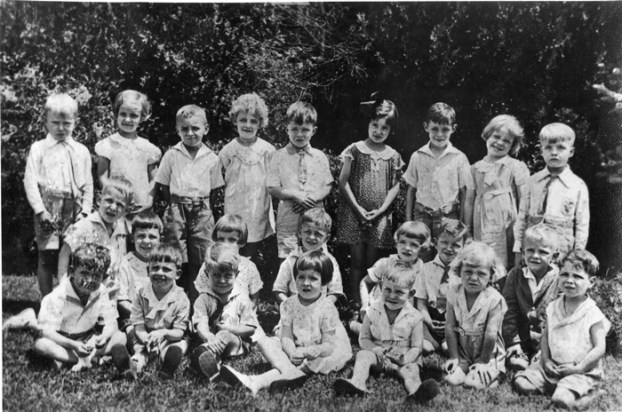 Ann Coggin provided this photograph from May 31, 1933, of the second-year kindergarten glass of Agnes Weant and Marie Graf. The class was putting on the play ‘Peter Painter and the All Alone Child’ that night on the lawn of Mrs. John C. Busby at 128 W. Thomas St. That same home has been in the news lately as “the house that disappeared” behind overgrown vegetation. Coggin is the girl sitting front and center in this photo, and a news clipping from the day said, ‘Little Ann Coggin presented a basket of flowers to be given to Mrs. Busby as a token of appreciation from pupils and teachers for the use of her beautiful lawn. Coggin did the best she could in identifying the children. Front row sitting, left to right: the first two boys are not known, Chris Busby, Ann Coggin, Pete Anderson, Ruth Ward and Bobby Spencer. The middle row: Paul Anderson, not known, Jeanne Dungan, Sammy Faggart, Ann Hudson, Bobby Barbee and not known. Standing, left to right: Bill Taylor, Ann Dungan, Jimmy Seay, Catherine Hudson, Jimmie Summers, Helen Compton, Johnny Elliott, not known and Johnny Beard. Coggin knows the following children are in the photograph, but she can’t say exactly where: Jimmie Crowell, Hearne Swink Jr., Jack Douglas, Joe Harris and Donnell Dunham.

Steve Arey says he was going through old newspapers that his  parents had saved and he found a clipping showing Ruby... read more