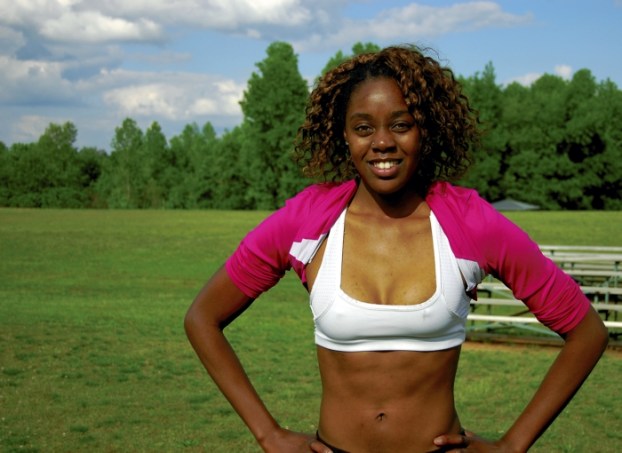 Avis Campbell, who works out at Salisbury Community Park, said she likes to work out because it eases her mind and allows her to lower her risk of obesity, diabetes and other health problems. She is studying to become a certified personal trainer. Amanda Raymond/Salisbury Post

The Dart: Lifelong runner hopes to inspire others to get fit Avis Campbell, who works out at Salisbury Community Park, said she wants to become a certified personal trainer to help others stay fit and avoid the health problems that come with unhealthy lifestyles. Amanda Raymond/Salisbury Post

SALISBURY — On a typical day, Avis Campbell, 26, will start with jogging two laps around the field at Salisbury Community Park. She stretches and warms her muscles up and then decides what her workout will be for the day.

Campbell has been running her whole life. During kindergarten or first grade, she found out how fast she was during a field day.

“I found out I was a little bit faster than the other girls and I could keep up with the boys,” she said.

As soon as she could join track and field in the third grade, she did.

She ran all through grade school and into college, and is now dedicating her life to helping other get and stay physically fit.

Campbell ran 10 events during track in high school and went on to run track while studying at Limestone College in South Carolina. Among the many events she ran, she participated in the 400-meter dash, 200-meter dash and four by 400-meter relay.

One of her favorite memories was a race she ran during a conference in Florida. During practice, she kept running far ahead of her other teammates and did not feel tired or sore afterwards. But that did not stop her from being nervous while positioning her feet into the starting block and putting her shaking hands down on the starting line for the 400-meter dash.

By the time the gun went off, she had refocused herself and stopped shaking. She burst out of the starting block and found that she was soon ahead of everyone else.

As she got to the last 100 meters, Campbell said everything slowed down and she could no longer hear the cheering crowd. She had three strides left and she looked up at the clock.

“The clock said 55 flat for two minutes,” she said. At least that is how it seemed. She ended up crossing the finish line at around 56 or 57 seconds.

Since Campbell has been involved in fitness for so long, she said working out is something that “comes naturally” to her.

“Working out eases my mind,” she said.

She has her days when she does not want to work out, but she can also stop exercising for two months and jump right back into it.

Campbell said she has a family member who is obese so she knew she probably had a higher risk of obesity than most people. She said she did not want to suffer from diabetes or any of the other health complications that can happen when a person is overweight.

“I’m trying to stay fit so I can live a long life,” she said.

Many of her former teammates have stopped working out, and Campbell has noticed that not a lot of her female teammates pursued a career in fitness. She also noticed there were not many female, black personal trainers who have college degrees.

So she decided to pursue a certification in personal training.

Campbell said she likes helping her friends and family stay in shape. She doesn’t have the typical intense personality that is attached to personal trainers; she’s energetic but has a nice disposition. She is the type of personal trainer that will encourage her clients with a smile on her face, which is what some people respond to.

She has encountered some speed bumps on her way to becoming a personal trainer. She took the test twice but did not do well either time. The second time was especially disheartening because she had a job lined up that depended on her passing the test.

Campbell didn’t work out for a month after that, but she got back up again.

“I’m going to be a certified personal trainer if it kills me,” she said.

She is not going to stop there; she plans to become a fitness instructor, exercise specialist and more. She has a list of everything she wants to accomplish at her house.

Campbell said for her, fitness is more than just a way to stay fit — it’s her life.

By Josh Bergeron josh.bergeron@salisburypost.com SALISBURY — The Piedmont has never seen an election quite like this year’s 13th District congressional... read more