Festival shows the wonderment of finding joy in the simple things 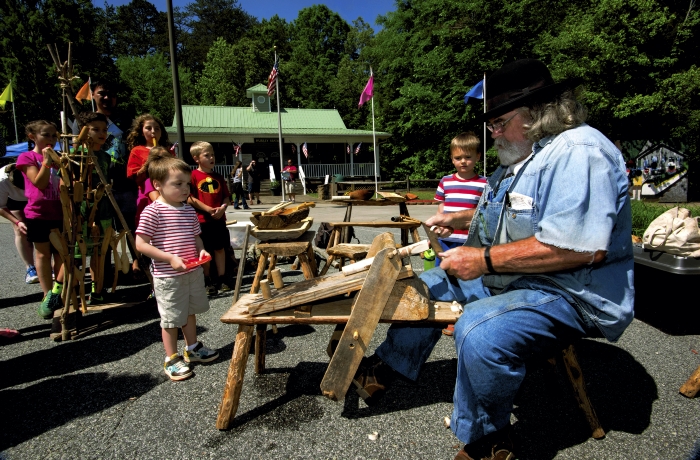 The youngster was pointing over to a rustic bench with a foot-levered fulcrum and a seat meant for mounting.

Martin walked over, straddled the bench and used its fulcrum to hold a piece of wood firmly in place. Then he started pulling a sharp drawing knife over the wood.

A quick study, Caleb said it looked as though Martin was making a square at the end of his piece of wood.

“That is correct,” Martin said. “You’re pretty smart. Feel how smooth that is.”

The craftsman and student would continue their conversation as Martin kept reshaping the wood and Caleb kept impressing him with his knowledge of the different shapes.

Who knew that carving on a straight piece of wood could hold such fascination for a boy, but that was one of the lessons of Saturday’s Simple Living Festival at Dan Nicholas Park.

Appreciate the simple things, and you might discover the ingenuity and skill at their root.

Saturday’s festival was a go-at-your-own-pace kind of event that included music at the Log Barn, craft and animal demonstrations, children’s games and even art by the the park’s animals themselves.

Frankie Tucker  said children who pick up the old-time toys put out for display by him and Matt Hatley are “just amazed at what a piece of wood can do.”

Hatley shows off their dancing preacher and dancing mule and pulls a cord on an egg beater-type of toy that, as it spins, creates all kinds of colors and designs.

The men, who call their creations Woodpecker Products, displayed a little bit of everything fashioned out of wood: birdhouses, animals, signs, spoons, walking sticks, faces, fairy gardens and stuff as big as chainsaw sculptures.

“I was blessed the way I came up, working with wood as much from necessity as it was entertainment.,” Hatley said. “You took nothing, and you made something out of it.”

Tucker and Hatley say all the wood they use are stumps, fallen limbs and scraps other people would burn or have no use for.

“There’s something you can do with everything,” said Hatley, who first learned carving by watching his great-grandfather with a pocketknife. He and tucker still wield their knives, but they’re not against employing some powers tools, because the basics remain the same.

“You’ve got to know your tools and materials, then you learn how to use them.,” Hatley said. “I learn on every piece of wood, and you learn more by doing.”

The pine knots they find burn like kerosene and old-timers, in fact, used them as flashlights. But woodcarvers such as Hatley and Tucker say if you look at pine knots close enough and follow the grain with your knife, you’ll find faces in them.

These “wood spirits” — old men with beards — sort of reveal themselves.

“Old people thought there was a face in every piece of wood, and they were about right,” Hatley said.

Wooden spoons also held special meanings. If you carved a spoon for a girl and she accepted it back in much simpler days, Hatley said, it meant you were engaged.

A tractor show, Discovery Place and Autumn Jubilee are on Hatley and Tucker’s schedule in coming weeks and months. But they especially liked Saturday’s Simple Living Festival.

“We get to play with the people more,” Hatley agreed.

Another wood carver, Rich Carter, was displaying his work for the first time Saturday. He has been carving on and off since 1963 and was interrupted for two years “by something called the Vietnam War.”

But he also gave his carvings as birthday, graduation and wedding gifts. Carter never thought about selling them. He set up beside Martin, who he carves with every Thursday morning and his partner Walter Kiefer usually joins them.

James “Jeep” Sabo, a blacksmith and tinsmith, also was nearby. He’s a science teacher at East Rowan High, but blacksmithing keeps him busy outside of school. Over the past six weekends, he had been to four shows in the mountains.

“In five years, when I retire from teaching,” Sabo said, “this is what I’ll do full-time.”

His display table was full of skinning knives, herb choppers, chop sticks, bottle openers, steak turners, beehive tools and fireplace equipment. He custom makes a lot of things after people describe to him exactly what they need.

A former college professor from West Virginia, Sabo took advantage of a museum studies program at Salem College and apprenticed for two years with a Mennonite blacksmith.

Now he has been blacksmithing for 28 years and describes it as “a good solid pastime.” Events like Saturday are fun, Sabo said.

“You meet a lot of neat people when you’re out here talking,” he added.