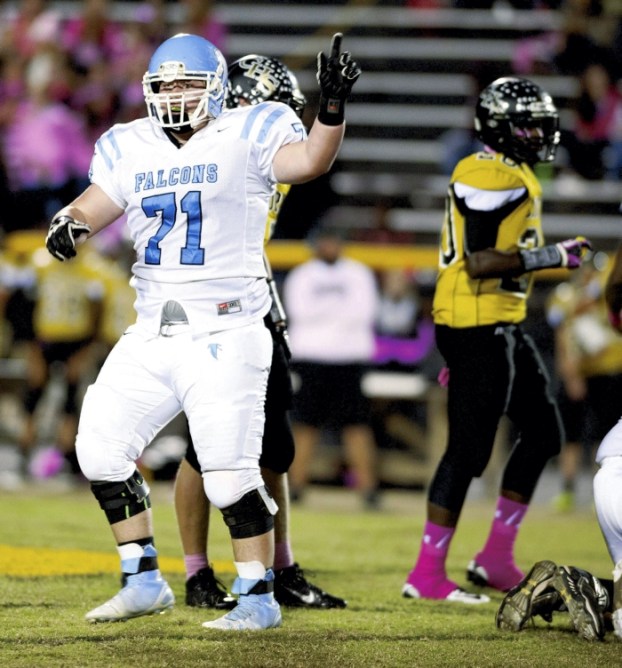 MOUNT ULLA — It’s Division III football so not everyone noticed, but Guilford went 9-1 and enjoyed the best season in school history last fall.
Winning helps recruiting, and West Rowan center Shane Barber, who played for a 10-4 team last year, likes the fact that the Quakers are winners. When you’re winning, everyone is in a good mood.
“Guilford is a welcoming place,” Barber said. “When I went up there to visit, it was like everyone already knew me. It was a pretty easy decision to go there.”
Barber, who made the All-Rowan County team, moved from guard to center as a senior. It was a move that helped the Falcons. It also helped the 6-foot, 285-pound Barber. Center is the 0-line position where height is the least critical.
“I went to Coach (Joe) Nixon last summer and told him I wanted to play college football,” Barber said. “Center was my best chance to do that, and he told me as long I kept working hard and kept my grades up, someone would give me a chance.”
As West’s center, Barber had added responsibilities regarding his teammates. He had to know what five guys were supposed to be doing, instead of just one.
“Shane is the one who made the blocking calls and the one who got us in the right pass protections,” Nixon said. “He had a great season.”
Asked to identify the strongest game of his senior year, Barber said it was the season-ending loss to South Point in the third round of the 3A state playoffs. That’s an unusual choice in that West suffered a heartbreaking, one-point loss in the last game of his prep career, but Barber said that game had a different feeling than all the others that came before it.
“We were getting beat down for a while, but then we started finding ways to move the football,” Barber said. “Guys were listening to my calls, and our o-line started taking control. That was a crazy experience seeing everyone come together, one of the best feelings I’ve ever had. I know we lost, but we played some great football.”
Barber will join a solid program that is getting stronger. Guilford expects 17 starters to return for the 2016 season and expects dozens more to return who have some game experience.
Barber’s former linemate Jacob Radtke appeared in two games for the Quakers as a freshman last season.
When the 2015 season started, Barber thought he was making a sacrifice for his team and his school. But sometimes sacrifices work out in unexpected ways.
“I’d been a guard all my life,” Barber said. “But it was playing center for great coaches that got me a ride to college. Being able to play the sport I love at the next level, that means a lot.”
Barber plans to major in psychology. He’s also interested in forensic biology. Guilford offers degrees in both fields.