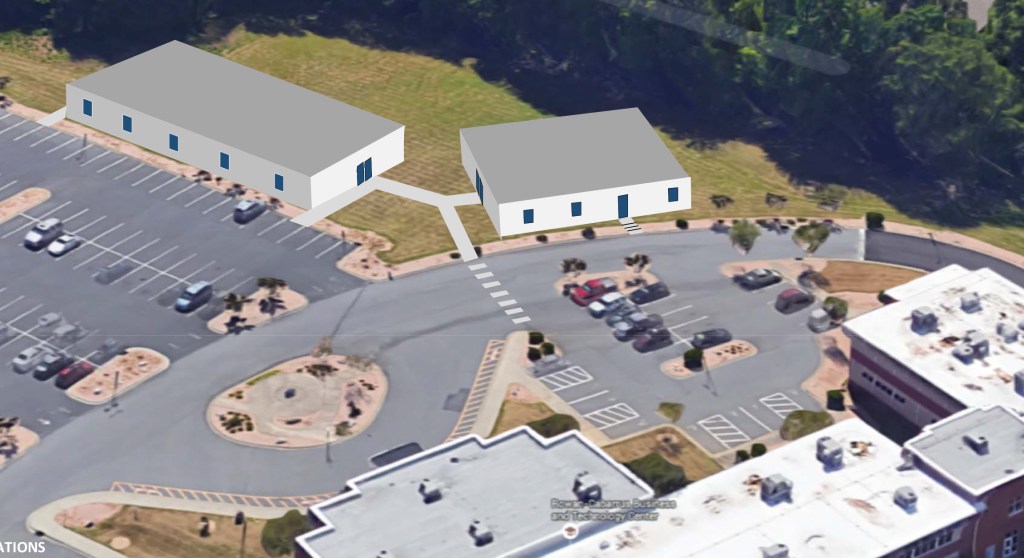 An artist's rendering of the new early college campus set to open at the Cabarrus Business and Technology Center in Concord.

CONCORD — When August rolls around, Rowan-Cabarrus Community College will roll out the carpet for a third early college campus.

Two early colleges currently run on RCCC campuses — one on the Salisbury north campus, and one out of the Concord south campus. At the start of the 2016-17 school year, a third early college will open at the Cabarrus Business and Technology Center off of U.S. 29 in Concord.

The early college movement started in the early 2000s, aiming to provide first-generation college students with a two-year associate degree, in addition to their diploma, by the time they graduated high school.

The Rowan County Early College program started up eight years ago, and the Concord-Kannapolis program launched one year later.

Vance Fishback championed the Concord-Kannapolis Early College as its first principal. He surrendered the position in March to lead the new school.

And the schools have paid off. According to an e-mail from the college, Rowan County Early College has had a 100 percent graduation rate for the last two years.

The Concord-Kannapolis Early College has been recognized as a School of Innovation and Excellence by N.C. New Schools/Breakthrough Learning. The 2015 Concord-Kannapolis graduating class received scholarship offers totaling more than $4 million.

The 63 students who will pioneer the new campus have already been accepted, Fishback said. Typically, he said, about 30 percent of early college students are not at grade level by the time they graduate middle school.

“They’re taking students who are not at grade level in eighth grade and having them college ready by the time they’re sophomores,” said Dr. Michael Quillen, vice president of Academic Programs at RCCC.

Students who attend the new campus will have a chance to focus on engineering and technology once they reach their senior year to match the computer science, electrical and engineering programs run out of the center.

The new campus will also have a close partnership with the Concord-Kannapolis Early College, according to Cabarrus County Schools Superintendent Dr. Chris Lowder.

The new campus will not only provide a place for students to focus on computer science and engineering in their senior year, but also will provide flexibility for the Concord-Kannapolis campus and expand the options and programs for both schools.

“Everybody has the same goal, and that’s to get kids through the associate degree, or to provide them with certificates and transferable credit, but how we go about that is a little bit different depending on the resources that each early college has,” Fishback said.

In the meantime, “there’s a lot of prep work that has to be done” before students start Aug. 10, Fishback said.

Teachers still need to be hired, classes with the college need to be coordinated and an empty field next to the Cabarrus Business and Technology Center is marked with orange flags, waiting for the early college buildings to arrive. The school will be housed in two military-grade portable units that the school system was able to purchase for $307,000.