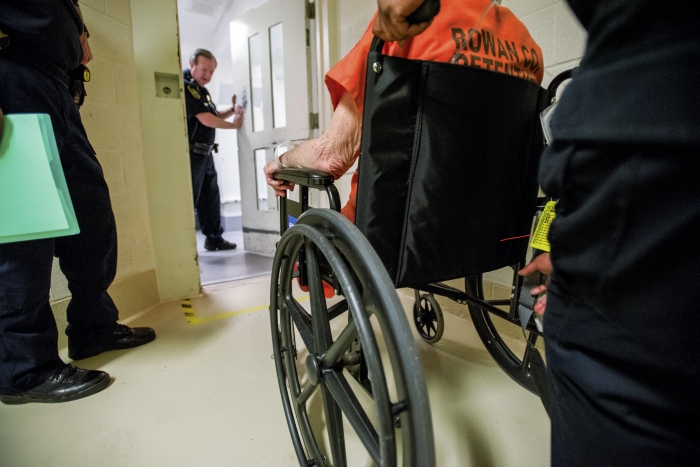 ALLISON LEE ISLEY/SALISBURY POST Lieutenant A. Mackey guides an inmate in a wheelchair out of the pod to go to court at the Rowan County Detention Center in Salisbury on Friday, April 29, 2016.

SALISBURY — Foster Elwood Speas was brought into the Rowan County Detention Center April 28 on a mandatory 48-hour hold after he was charged with assault, kidnapping and interfering with 911 communications. The 80-year-old has significant health issues, which isn’t uncommon to see in the jail, says Sheriff Kevin Auten.

There are a number of inmates in the county jail awaiting trial, many of whom have serious health issues that require constant, if not daily monitoring. Health care for inmates accounts for a large portion of the Rowan County Sheriff’s Office budget. In fact, it’s one of the highest costs just after providing food for inmates.

The Rowan Sheriff’s Office operates on a $5.6 million budget, a large portion of which comes from the cost of detaining inmates and especially providing them medical care, Auten said.

As part of the 2015-16 fiscal year, the sheriff’s office budget includes $450,000 for food, as well as $398,650 for health care costs and $150,000 for medical safe keeper.
The medical safe keeper program covers an inmate who requires care beyond what the detention center can meet. For example, a female inmate who requires medical care to deliver a baby would go to a hospital. Her cost would be covered under the medical safe keeper program.
The budget also contains $86,000 in water costs, $80,000 for gas and $195,000 for electric.
Auten said money received from the Statewide Misdemeanant Confinement program also goes back into the budget to help cover medical costs for inmates to the tune of $36,000 a month. Rowan County volunteered its available space to house these inmates.
There are 30 inmates in the county jail who are a part of the Misdemeanant Confinement Program, at a rate of $40 a day, per prisoner.
The reimbursements are allocated from the Statewide Misdemeanant Confinement Fund.  The North Carolina Sheriffs’ Association manages the day-to-day operations of the program.
“We are not running this jail for profit, but it is reinvested for medical costs,” Auten said.
Part of the health care costs covers a contract with Southern Health Partners, which provides an on-site physician and other medical staff including a nurse.
Auten said the jail is inundated with people, like Speas, who have health issues and remain in the jail waiting for their turn in court. Speas, who was placed in a jail pod that could accommodate a wheelchair, was wheeled into a district courtroom where he appeared before District Court Judge James Randolph.
His attorney spoke on his behalf, explained to the judge his client had a number of health issues including COPD, ulcers, had a bout of pneumonia, required oxygen and a special liquid diet, and was in need of his medications.
“They don’t have the capability to take care of him at this jail,” his attorney said.
The judge agreed with the attorney and decided the Cleveland resident would be allowed to be placed in an outside facility that could better meet his needs.
But for 48 hours, the Rowan County Detention Center addressed Speas’ medical needs. Speas will return to court later this month to tackle the domestic-related assault charges.
“We have paid for emergency by-pass surgery, chemotherapy treatments, baby delivery,” Auten said.
There are other inmates who have addictions when they are admitted and while in the jail are in withdrawal, others have ongoing medical issues like diabetes.
“Last year, we had three at the hospital at the same time,” Auten said.
He admits sometimes the county jail cannot provide inmates the care they need and many go to Central Prison in Raleigh. However, until inmates are accepted into Central Prison, they remain on a waiting list at the county jail.
Contact reporter Shavonne Walker at 704-797-4253.