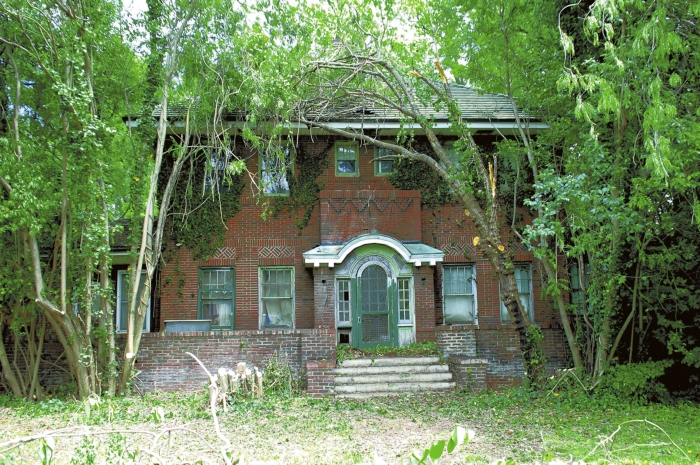 A work crew from Historic Salisbury Foundation spent a morning cutting through the vegetation that had covered this house at 128 W. Thomas St. in May 2016. Mark Wineka/Salisbury Post

SALISBURY — Historic Salisbury Foundation volunteers formed a work crew Saturday morning that hacked, pulled, chopped and sawed its way through vegetation covering up the front of a home at 128 W. Thomas St.

An earlier Post story referred to the structure as “the house that disappeared.” In March, Historic Salisbury Foundation asked and received from the Historic Preservation Commission a 90-day extension to delay the city’s demolition of the house.

If nothing else, the work Saturday showed just how handsome of a structure the two-story brick home once was. Built in 1922 and considered a “contributing” structure in the West Square Historic District, the house includes about 3,500 square feet. The district is on the National Register of Historic Places.

The foundation has the permission of the house’s owner, John M. Cheek, to seek out potential buyers for the property or find some other kind of solution that would save it from demolition.

The home has considerable damage in the rear and would require a major restoration. The foundation is referring to it as the McCanless-Busby-Thompson House in connection to its first three owners.

Charles McCanless built the Colonial Revival home. Attorney J.C. Busby was the next owner, and his widow, Florence, lived in the house into the 1940s, when Emmet Thompson purchased it. Cheek bought the home from Dr. Edward R. Spicer and his wife in 1982.