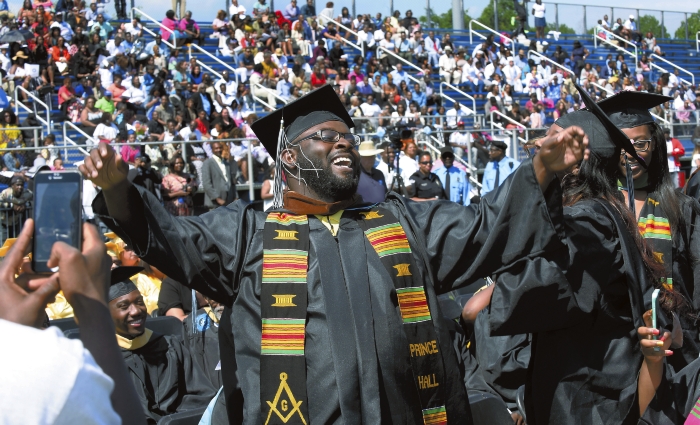 Kevin Michael Pettice dances before heading to the stage to get his degree. Livingstone College graduation ceremony was held outside in Alumni Memorial Stadium. photo by Wayne Hinshaw, for the Salisbury Post

Valedictorian Ronald Harris III created an acronym for “blue,” one of the school’s colors, for his speech. “Believe, love yourself, unite with positive people, and energize the world,” he said.

The class of approximately 130 graduates included four military veterans. Chris Sharpe, of Salisbury, who served in the Army as a truck driver, graduated with a criminal justice degree. He plans to assist veterans and ex-convicts get reincorporated into society.

“It has been an exceptionally good opportunity to learn here, but it was challenging,” he said. Sharpe underwent a total knee replacement not long ago, and still accomplished his goal.

LaQueena Allison is one of the first-generation graduates.

“It has been a wonderful experience, and I really enjoyed it,” she said.

During commencement, a degree was awarded posthumously to Aiyanna Perkins, who passed away after a car accident in February. Her mother, Sheila Graham, accepted the award.

“It is an honor to be presented with this degree that she worked so hard for,” Graham said. Perkins was about to be commissioned into the U.S. Army at the time of her death.

“Your challenge going forward is to not reaffirm the stereotypes. Defy the odds.”