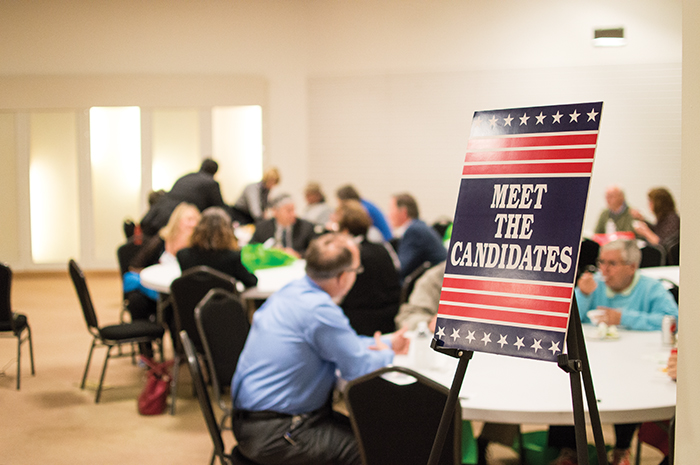 Josh Bergeron / Salisbury Post - A few dozen people gathered at the West End Plaza on Thursday as part of a meet the candidates event hosted by the Rowan County Chamber of Commerce.

SALISBURY — The Piedmont has never seen an election quite like this year’s 13th District congressional race.

Candidates are sprinting to the finish line — the June 7 primary — with a watchful eye on the courts. In a field of 17 Republicans and five Democrats, all that’s needed is a simple majority, and candidates speculate that the winning number could be just a few thousand votes.

Normally, candidates would need to secure at least 40 percent of the vote to advance to the general election and avoid a runoff. This year, there’s no runoff.

“Because there’s not a whole lot of time between now and the election, candidates have to differentiate themselves from the other 16,” said Republican candidate Vernon Robinson of Winston-Salem, at a recent Rowan County Chamber of Commerce event. “We want to find 300 fellas and women who can grab 19 of their friends and go vote.”

By Robinson’s count, the winning number of votes would be about 5,700. That’s fewer votes than Rowan County Commissioner Jim Greene received during the 2014 Republican primary, when he finished first.

“This is truly going to be a turn-out-the-vote campaign,” said Republican candidate Jason Walser of Salisbury.

Other Rowan Republicans in the race are N.C. Rep. Harry Warren of Salisbury and Kathy Feathers of Granite Quarry.

Where is the 13th anyway?

The 13th District starts near the center of Guilford County and fans out in a jagged semi-circle until reaching the county line. It includes all of Davidson and Davie counties and nearly all of Iredell County. In Rowan County, the 13th District includes a few hundred voters in Spencer, all of Salisbury and nearly all Rowan residents located north of Mooresville Road.

Rowan’s remaining voters — most of the county’s population — are in the 8th Congressional District now represented by Republican Richard Hudson.

Davie County is the smallest of the five counties in the district, but it’s only several thousand voters behind Rowan’s portion of the 13th.

By voter registration, Davidson County is the second largest in the 13th. Iredell is third. Both contain more than twice the number of registered voters as Rowan.

Guilford and Davidson counties are unique because of their low number of local candidates in the GOP race. Guilford has two — state legislator John Blust and Guilford County Commissioner Hank Henning. Davidson has only one —attorney Jim Snyder.

On the Democratic Party side, Guilford has high numbers — four of the five Democrats in the 13th District race live there. The fifth candidate, businessman Kevin Griffin, lives outside of the district, in Durham.

By comparison, five Davie County residents have filed to run for the seat.

In the large field, candidates are reaching out to friends in neighboring communities in an attempt to siphon as many votes as possible. Walser, for example, talks about his time at the LandTrust for Central North Carolina, where he worked for six years. Walser says he’s met with families across the district during his time at the LandTrust. He also graduated from Statesville High School.

Griffin talks about the fact that he has lived in Greensboro and High Point and, for years, went to a dentist in Lexington.

In a recent interview with the Salisbury Post, Statesville resident Chad Gant talked about the fact that he previously worked at Freightliner in Cleveland.

What about the courts?

In February, three federal judges declared North Carolina’s congressional map unconstitutional. The districts were racially gerrymandered, the judges said. As a result, a new congressional map was quickly drawn and approved by the state legislature in order to hold a primary before November’s general election.

June 7 was picked as the date for a congressional primary. Runoff elections were eliminated. Suddenly, Rowan County switched from being split by three congressional districts to two.

Federal courts, however, have yet to approve the redrawn congressional map. The June primaries are going on as scheduled, but candidates say they’re worried about whether courts will strike down the state’s map again.

“I think about what it means in terms of the funds that I’ve raised and relationships I’ve forged, if parts of the district go somewhere else,” Walser said. “I do believe that the further into this we go, just by sheer logistics, it makes it less and less likely that we can change it.”

State Rep. Harry Warren, one of the 17 Republican candidates, speculated that inaction by the courts is affecting fundraising numbers.

“I was telling somebody recently that this is the least expensive time that this race will ever be run,” Warren said. “Here’s the thing you have to keep an eye on: the district has yet to be approved by the courts … I think that’s one reason why some candidates haven’t begun to spend that much money.”

In addition to the court decision, fundraising may be affected by the fact that there’s no incumbent running in the 13th District.

Republican Rep. George Holding currently represents the 13th, but he chose to run closer to home after his district was moved. The latest fundraising numbers show Holding has $572,837 in cash on hand — five times more than any candidate in the 13th. By comparison, Rep. Virginia Foxx, whose 5th District previously extended into Rowan, has about $2.5 million in cash on hand, according to the latest fundraising numbers.

In the 13th District race, State Sen. Andrew Brock, a Republican from Mocksville, leads all candidates — Republican or Democrat — in cash on hand. His campaign account contains $102,760, according to the latest fundraising numbers.

Most of Brock’s money hasn’t come from individual contributions. Instead, Brock loaned his campaign $100,000. Brock said he “just had to put put some money in the campaign to get going.” He said the $100,000 was money he had saved up to make a down payment on a house.

Campaign finance records show Brock had not spent any of the $100,000 loan as of March 31. He could keep the money in his campaign until the end of the race and pay himself back. Or, he could use contributions to the campaign as a form of repayment if he spends part of the loan.

“Hopefully, I’ll get the loan back, or my wife will kill me and my insurance policy isn’t that much,” Brock joked. “That’s all I’ve got.”

Republican Kay Daly’s campaign account contains the next largest amount of cash on hand — $55,058. However, Daly has been running for Congress for several more months than most candidates in the 13th. Before the court decision, Daly was a candidate for the 2nd Congressional District in eastern North Carolina.

How are they campaigning?

Campaigning in the 13th District race looks like most political races — fundraisers, speaking at community events and ample use of social media.

State legislators are attending as many events as possible, while still trying to maintain other responsibilities. On Thursday, for example, Warren drove from the state legislature in Raleigh to the West End Plaza in Salisbury for a Chamber of Commerce event. He stopped to talk to some of the attendees, and then left for another event.

It’s unlikely all 22 candidates will attend any one event. For example, 10 candidates attended a recent forum hosted by Conservatives for Guilford County. When the Rowan County Chamber of Commerce held an event to meet the congressional candidates on Thursday, five showed up.

After voters choose candidates in the June primary, one from each party will advance to the November general election. That race will be significantly different and more expensive than the primary, Warren said. He said the general election race will likely involve 10 times the amount of money.