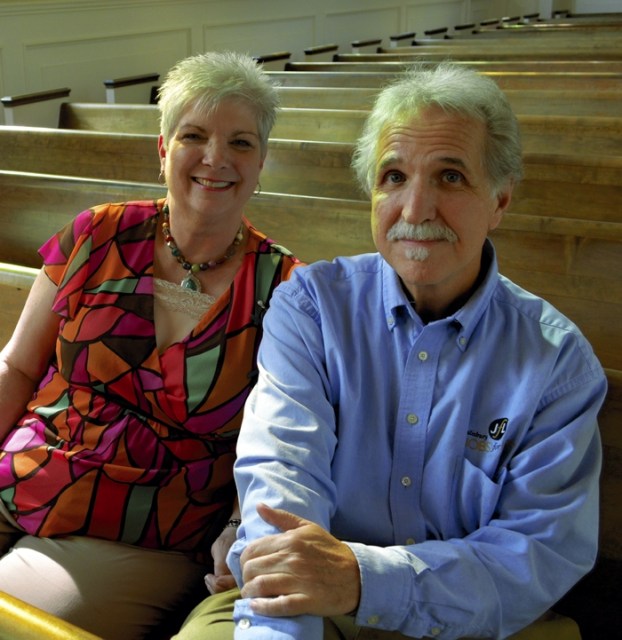 Robin and Rod Kerr sit in the sanctuary of First Baptist Church. Rod is still recovering from emergency surgery in January that forced him to slow his breakneck schedule.

A white handkerchief is tied to the doorknob of Rod Kerr’s office.

Rod is passionate about a lot of things. One of the things he’s been most passionate recently about during his tenure at First Baptist Church is the congregation’s Jobs for Life program. He’s served as site leader for the eight-week program that puts people back to work.

It’s been wildly successful, having recently graduated its third class.

Rod is an overachiever in a family of overachievers. He’s one of those people who seems to be constantly on the go. His resume his long.

But illness recently stopped Rod in his tracks.

In January, he came down with shingles. He was taking ibuprofen and prednisone. He was still working, and conducting Jobs for Life interviews at church one day. His wife, Robin, was waiting in his office.

Rod suddenly became uncomfortable, and experienced a great deal of pain. He suspected a kidney stone.

He asked Robin to take him home, but by the time they arrived, he asked her to take him to the hospital.

“He was screaming,” Robin remembers. “Every bump I would go over, he was hollering.”

At the hospital, he received morphine, which didn’t touch the pain. He was later transferred to CMC NorthEast, where his doctors were.

The doctor told him that the medicine had “blown a hole” in his stomach. Years before, Rod had gastric bypass surgery, which may have made his stomach more susceptible to problems.

“It was one of those things that just happened,” Robin says.

Rod had surgery to repair his stomach on Jan. 23. A week later, he attended a Jobs for Life meet-and-greet event, despite the fact he had to use a walker.

Sharon Horton and Becky Albrecht, the program’s volunteer administrative assistants, stepped up to help during Rod’s absence, as did others.

“Everything was covered,” Rod says.

“We had to start bathing everything in prayer,” Sharon says. “We did not feel equipped to lead, because Rod is our leader. But he had already planned so many parts. We knew exactly what he wanted us to do.”

She continues, “Jobs for Life is such an important part of our community. We could not let these applicants down. We never thought twice about not following through. Hard? Yes. But we just prayed about it.”

Rod eventually returned to work even though he was on strict orders not to do any lifting. That was a challenge, given he had to set up for Jobs for Life classes.

But Robin had “spies” all over church, and those folks told Rod when it was time for him to go home.

“He has a hard time taking it easy,” Robin admits.

For Rod, it had to be a time of rest, a time of Sabbath. He also struggled to recover from the “fog” of anesthesia.

“That’s very frustrating,” Robin says. “He couldn’t focus to read. It was a very humbling experience.”

“It has been humbling,” Rod agrees. “I guess that’s the best word to use.”

Rod has had to relearn eating, relying mostly on protein shakes.

He hasn’t been depressed, exactly, he says, but he has been experiencing grief — the grief of transitioning from one stage of his career to another.

“It was authentic grief,” he says.

“It was a harsh transition,” Robin notes.

“There is a larger plan at work,” Rod says. “You step from your time to God’s time.”

The wait is over — you no longer have to worry about when the Spring Extension Master Gardener Plant Sale... read more