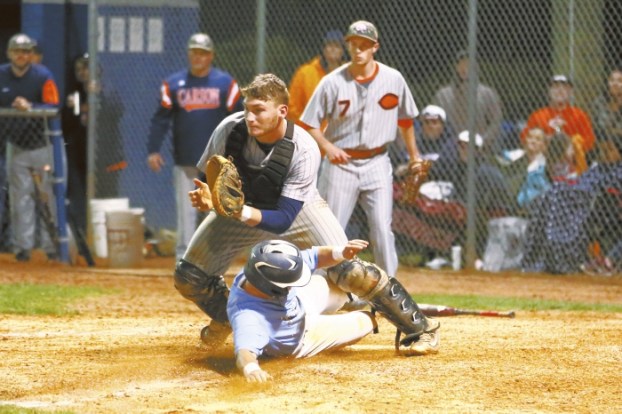 James Sipes/for the Salisbury Post ... West Rowan’s Kasey Otto slides between the legs of Carson catcher Ryan Bearden, scoring the tying run in the bottom of the 7th inning of last night’s game.

MOUNT ULLA — Austin Love’s three-run, walk-off homer in the ninth inning gave West Rowan a 7-5 victory, its first conference tournament championship since 2003.
Love also produced the two-out hit in the seventh that saved the Falcons from a regulation defeat and sent the South Piedmont Conference Tournament title game to extra innings.
Love, a junior committed to UNC, has been tremendous on the mound all season, but he’d been average at the plate until Friday’s game. He entered the contest batting .227 with 11 RBIs.
“We had a game recently (against Concord) where Austin went 0-for-4 with four strikeouts, but we still won the game, and I told him that there would be a night where he’d have to come up big for us as a hitter,” West coach Seth Graham said. “This was the night.”
Love had four hits and five RBIs and his walk-off blast to left also made him the winning pitcher. He’s 8-1 on the mound.
His lone pitching loss came early in the season on the West field to Carson.
“There was some revenge tonight,” Love said. “It’s been a long time since I’ve had a game where I hit like that. I was just seeing the ball better.”
West was going to be the SPC’s No. 1 seed for the 3A state playoffs, win or lose, but Carson had a lot at stake. The Cougars would’ve swapped seeds with East Rowan — trading the No. 3 seed for East’s No. 2 — if they’d won.
West Rowan got seven bulldog innings out of starting pitcher Caleb Link, but the Falcons fielded baseballs like they were handling hand grenades. West made seven errors and two other plays that weren’t made provided borderline scoring decisions.
“It was probably as bad as we can play defensively and we lost so many runs with baserunning mistakes that I lost count,” Graham said. “But we overcame all of it. Our pitchers did a good job and we made up for a lot of mistakes with our bats.”
Olen Stamper helped out in both areas. He had three hits and he got the Cougars out in the eighth inning after he relieved Link. Stamper also got one out in the ninth before Love took the mound to face Carson slugger Owen White.
Carson got five innings from starter Maddux Holshouser before reliever Caleb Hall went the rest of the way.
Even with a multitude of errors and baserunning gaffes, West (22-5) held a 3-2 lead after four innings.
“Both teams missed a ton of scoring opportunities early,” Carson coach Chris Cauble said. “But both teams also battled back a number of times.”
A single by Alden Blackwelder and a double by Michael Morrison, one of the leadoff man’s three hits, set up White’s sac fly that tied the game at 3-all in the fifth.
White came through again in the seventh, lashing a two-out RBI double down the left-field line to give the Cougars a 4-3 lead.
Kacey Otto reached on an error to start the bottom of the seventh, advanced to second on a wild pitch and dashed home with the tying run when Love rescued the Falcons with a two-out single to left.
“Both teams are full of fighters, and we just had to keep battling every inning,” Otto said. “Austin was on tonight with the bat. He kept coming through.”
With one out in the ninth, Carson put two men on base when Blackwelder walked and Morrison singled.
Love relieved Stamper, with White coming to the plate, and White bounced into a fielder’s choice. A high throw on Brandon Mock’s grounder to third allowed Carson to take a 5-4 lead.
Love kept the deficit at 5-4, intentionally walking Ryan Bearden, and then retiring Grayson Whicker on a flyball.
Hall had been good for the Cougars in the sixth, seventh and eighth, and with Carson playing its third game in three days, Cauble stayed with him in the ninth.
Otto reached to start the ninth. He hit a hard groundball that Carson third baseman Ben Shoaf knocked down before making a one-hop throw to first. Otto was safe on a close play. Brandon Walton flied out deep to right, but then Trevor Atwood singled to put two men on.
“Usually against West you can relax a little when you get past Otto and Walton,” Morrison said. “But that wasn’t the case tonight.”
Love was next. Hall got a pitch up, and Love jumped on it for the game-winning homer, his first of the season.
“I was just hoping it was going to carry over the left fielder’s head,” Love said. “Then it just kept going.”
Morrison, playing center field, watched helplessly as the ball sailed.
“I was just hoping maybe it would go foul because I knew it had the distance,” Morrison said. “Caleb did such a great job for so many innings. He gave us a lot of chances to win this ballgame.”
Carson had nine hits but left nine on base. West had 15 hits and left 10 men on.
“It came down to the last swing, and that’s how a championship game should be, ” Cauble said. “You couldn’t have scripted a more exciting game, but if you’re a Carson fan you would like to have scripted a different result.”
Ironically, the last time West won a conference tournament, Cauble was coaching the Falcons. West’s 22nd win of the season tied Skip Kraft’s 1997 club for the second-highest win total in school history.
“This team keeps competing when things are going wrong,” Graham said. “Our seed wasn’t going to change tonight, but if we put on the uniforms and turn on the scoreboard, we want to win.”
Both teams will start playoff action on Wednesday.

By David Shaw sports@salisburypost.com THOMASVILLE — If there were any lingering questions about North Rowan’s baseball team, there shouldn’t be... read more