Other voices: How’s your constitution? 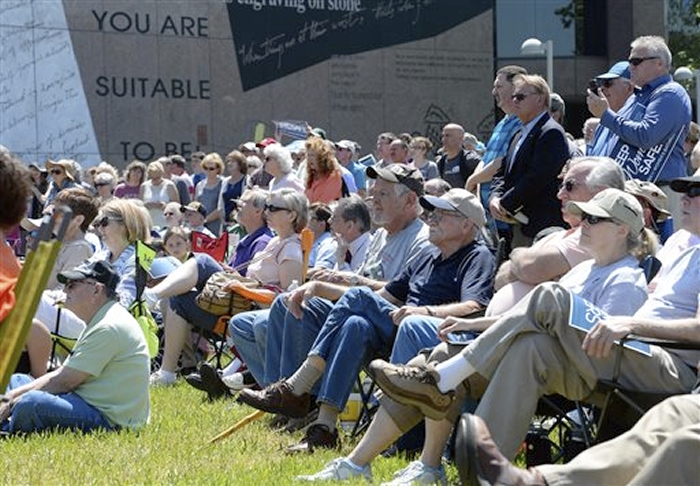 Supporters of HB2 hold a rally on the Halifax Mall in Raleigh on April 25. AP photo

The notion of turning House Bill 2 into a proposed amendment to the North Carolina Constitution is certainly novel. No other state includes in its fundamental law a directive on what public bathrooms people must use.

Some of the state senators who helped ram HB 2 through a one-day special session March 23 now think they might let the people vote on it. What part or parts of it? HB 2 is a five-page bill that contains several sweeping measures. That much language can’t be put on a single ballot question. So, if legislators are serious about letting voters decide, they’ll break it down.

Let’s note, however, that the legislature just last year refused to let the people of Greensboro vote on a new City Council election plan concocted in Raleigh, so its commitment to the referendum process is quite selective.

• Should cities be allowed to require employers to pay a minimum wage higher than the state level?

• Should cities be allowed to enact ordinances that protect residents and visitors from all forms of discrimination?

• Should North Carolina residents be allowed to file discrimination claims in state courts?

If voters affirmed, those measures would make worthy additions to the state constitution.

Legislators probably don’t have in mind putting those parts of HB 2 to a vote of the people.

The only part of the new law they might want to test in a vote is the bathroom portion: Should public agencies require people to use bathrooms that correspond to their biological sex as defined by what’s stated on their birth certificates?

Since hastily signing HB 2 the night of March 23, Gov. Pat McCrory has responded to criticism by insisting “these complex issues deserve real dialogue about common-sense solutions.”

He should have taken time for dialogue before he picked up his pen. Would he listen to other voices during a referendum campaign? To the many business leaders calling for HB 2’s repeal? To the professional and collegiate sports associations that won’t hold major events in North Carolina? To the chambers of commerce that warn of losses totaling millions of dollars?

Would he listen to the American Academy of Pediatrics, which says HB 2 harms transgender young people? Or other medical groups, including those that point out the fact that in some people birth gender is ambiguous?

These complex issues were dealt with in the crudest, most thoughtless manner possible by our legislature and governor. And now, in a transparent attempt to deflect political pressure, some of the same legislators think it’s a good idea to ask the voters to affirm their crude and thoughtless action.

If that happens, the new amendment could be placed right next to the last one added to our constitution: “Marriage between one man and one woman is the only domestic legal union that shall be valid or recognized in this State.”