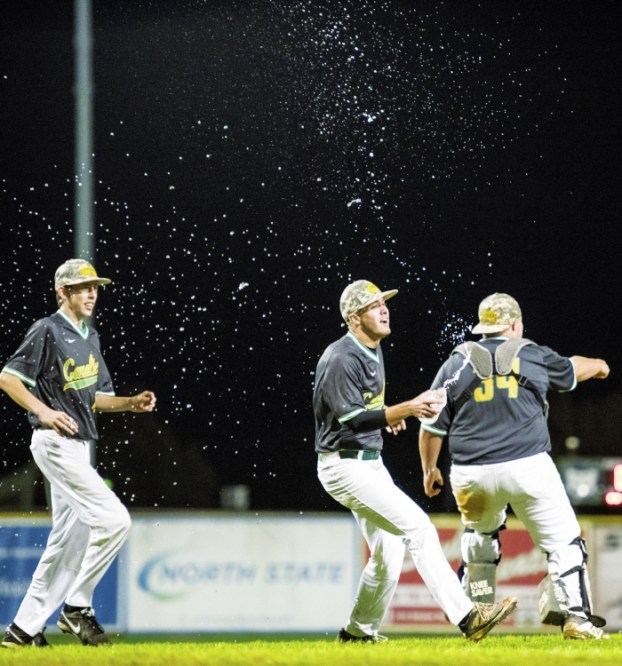 ALLISON LEE ISLEY/SALISBURY POST... Following the final out, North Rowan celebrates its victory over Salisbury in the CCC Tournament championship game at Finch Field in Thomasville on Friday night. North won the game, 3-0.

THOMASVILLE — If there were any lingering questions about North Rowan’s baseball team, there shouldn’t be now.

Not after the Cavaliers outscored Salisbury, 3-0, in Friday’s Central Carolina Conference Tournament championship game at Finch Field. It was North’s first conference tournament title since taking the YVC sash in 2011.

“We were playing all right at the beginning of the season, but not to our full potential,” second baseman Corbin Smith said after North (17-7) extended its winning streak to 10 games and won its first CCC crown in 12 years. “In these last few games, we’ve shown what we can do. We turned it around.”

North received top-shelf pitching from starter Noah Gonzalez and relievers Lee Sells and Joe Harrison, who combined on a three-hitter. Gonzalez went four innings, struck out seven and earned his fifth win. Sells faced only six batters in two innings of hitless relief and Harrison escaped a seventh-inning jam to record a save.

“That was a real good, clean, ballgame,” said winning coach Aaron Rimer. “We lost some games early that maybe we shouldn’t have, but these kids bought in and they’re believing.”

Smith gave them a good reason to. The junior provided most of the firepower with his first home run — a cloud-scraping blast that cleared the left field fence in the bottom of the third inning — and then a two-out, two-run single in the fourth.

“He was our momentum this game,” said shortstop Tre Stoner, a senior who switched positions with Smith midway through the season. “And he’s been the man since middle school.”

Gonzalez, a senior right-hander, struggled early but made his three best pitches to defuse a Salisbury (12-14) rally in the top of the first inning. The Hornets loaded the bases with two outs on a double by Will Steinman and walks to Alex and John Yang. When the count went to 3-and-0 on Chandler Lippard, Gonzalez was in trouble.

“Mentally, I felt 100 percent ready tonight,” he said. “But that (pre-game) rain got the mound good and wet and my release points were too high. I just had to work through it.”

Gonzalez worked his magic by throwing a pair of perfect, four-seam fastballs for strikes. Then he caught Lippard looking on an unexpected, 3-2 slider.

“That was a gutsy call,” said first-year Salisbury coach Mike Herndon. “Especially in that situation — bases-loaded, 3-2, when he’d been struggling.”

Salisbury right-hander Griffin Myers kept North off the scoreboard until Smith launched his first pitch of the third inning for a home run. “Fastball right down the middle,” Smith said. “That’s a pitch you dream about. I hadn’t even hit one out in practice.”

The game was not without controversy. Trailing 1-0 in the top of the fourth, Salisbury put runners on first and second base with two away. An attempted double-steal advanced each of them and when North catcher Steve Thurston overthrew the ball into left field, the Hornets had seemingly tied the score.

“That’s what we thought,” Herndon said.

“His bat crossed right in front of my face and that made me release it high,” said Thurston. “I don’t know if that’s the rule, that if he gets in your way, it’s interference.”

Herndon argued to no avail. “That was crazy,” he said. “It was a very big turning point.”

It magnified in the last of the fourth when North scored a pair of unearned runs. Thurston reached on a two-out error, Gonzalez drew a four-pitch walk and Brandon White was hit by a pitch. With the sacks full, Smith grounded a 1-0 pitch into left field, plating two insurance runs.

“Curveball, and that’s a tough pitch to hit right there,” Smith said. “But I saw it right out of his hand. That was a real good time to put some points on the board.”

The rest was up to Sells and Harrison, who held off Salisbury’s belated charge.

“It’s a small dream,” Gonzalez said. “On the way to a bigger dream — the state championship.”

NOTES: Both teams will likely host 2A state playoff games on Wednesday. North enters with a 15-7 record for seeding purposes and Salisbury goes in at 11-11. … Salisbury last won the CCC tournament in 2011. … The start of the game was delayed about 20 minutes by a rain shower.

By Dennis Davidson dennis.davidson@salisburypost.com Just over a year ago, Scott Young stepped down as head football coach at West Rowan... read more