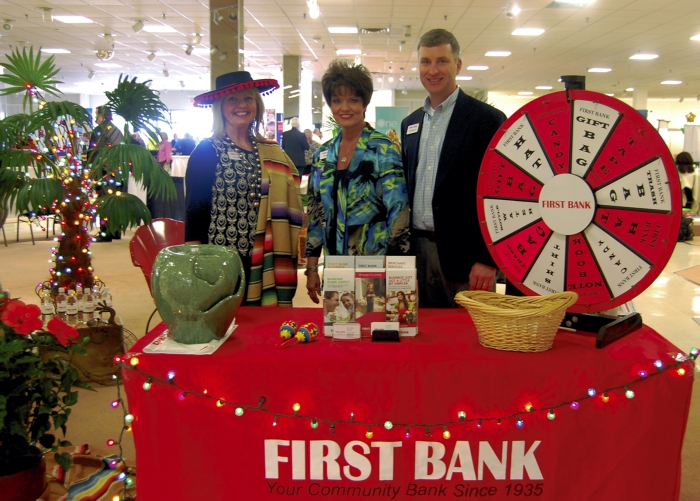 SALISBURY — Lady Ren’s Nook, a gourmet bakery and children’s bookstore based in Concord, was just one of the 52 exhibitors at the Rowan County Chamber of Commerce’s Trade Show on Thursday. Renate Moore, CEO, said she gave away a door prize basket that included gourmet jam, a gift card, a jam spreader and a beverage napkin.

Moore, also a published author, said she wanted to provide desserts to the public that were made of wholesome, natural and organic ingredients.

“I enjoy eating, but healthy food,” she said.

Moore is also an advocate for literacy and focused on children because she said that is where a love of reading can be planted.

Moore said the exhibit was worthwhile because she was able to make connections with other business people and potential clients.

“I was able to reach new clients and have some more exposure,” she said.

The show is the chamber’s largest networking event. Elaine Spalding, president of the chamber, said close to 500 people visited the event in the first two hours. From 2 to 7 p.m., businesses were able to showcase their services and products.

The event started with a ribbon cutting to open the exhibit hall to the public, and Spalding said there were visitors lined up at both ends of the plaza.

This was the first year the event was held at the West End Plaza. Spalding said the venue worked great for this year’s show because it was in a central location and had plenty of parking.

“We’ve received excellent feedback on the venue this year,” she said.

Teresa Dakins, chairwoman of the show, said it was good to generate some action at the plaza.

“People are excited to see activity over here,” she said.

Spalding said the show helps businesses market their services and products and allows businesses to get to know each other.

“It’s a really good opportunity just to get to know other people in the community,” she said.

Spalding said the exhibitors arrived early to set up their booths and took the Cinco de Mayo theme to heart.

“Several of our businesses went above and beyond,” she said.

One of those business was First Bank.

Jeff Wetmore, city executive, Millie Cress, bank manager, and Pam Smith decorated their booth with sombreros, maracas, colored lights, a piñata and hibiscus plants from Rufty’s Garden Shop. They also had a wheel that visitors could spin for prizes.

This is the 17th year First Bank has had a booth at the show, and Cress said they enjoy taking part and giving back to the community.

“I always say, if we live and work here, it’s our responsibility to give back,” she said.

IsJays Sweets & Celebrations, at 206 S. Main St., was another exhibitor at the show. Laverne Stephens, owner, had samples of red velvet, strawberry and yellow cake cupcakes and cake balls.

The business bakes cakes by the order and also hosts private, themed and cupcake parties. It has a video gaming lounge, and Stephens said she hopes to soon be able to offer baking classes.

Stephens said business had slowed down after the holidays, but was starting to pick up again with graduations around the corner.

“Hopefully (the show) will increase my foot traffic,” she said.

Enid Rodriguez, from Better Loafing at 1024 S. Fulton St., said the exposure from the show was great.

“We’ve even been able to sell some stuff today,” she said, also saying the garlic knots she brought sold out quickly. There were also bagels and different kinds of bread at the booth.

Spalding said a good mix of people and businesses were able to attend the show, which could not have been a success without the help of the volunteers and participation from the exhibitors and community.