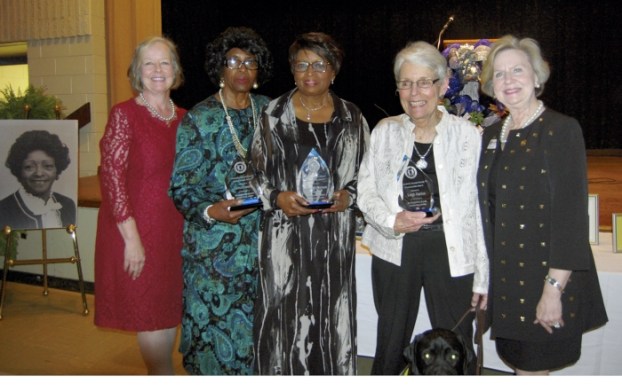 SALISBURY — Dora Virginia Wood, Human Relations Council member and godchild to Elizabeth Duncan Koontz, said she used to play with Koontz’s fox fur while sitting behind her in church as a little girl.

Koontz’s always wore the fox fur and after overhearing some of the adults, Wood learned Koontz did it to keep her quiet and occupied during the service.

“I believe she wore that fox fur just for me,” she said.

Veleria Levy, chairwoman of the Elizabeth Duncan Koontz committee, was the master of ceremony and Dee Dee Wright organized the event.

The award is given in memory of Elizabeth Koontz, one of the organizers who re-established the Human Relations Council in 1985. Recipients of the award represent Koontz’s ideals and have contributed to improving human relations.

The awards for this year were given to Greta Connor, Leigh Harlan and Kay Wright Norman.

Greta Connor is known for her work with the J.P. Johnson Memorial Society and the Senior Morning Out program, which provides senior citizens with information on different issues, as well as local services.

Leigh Harlan has worked with Rowan Helping Ministries and raises and trains dogs to help visually impaired individuals and those who suffer from seizures.

Kay Wright Norman was a member and officer for the Rowan-Salisbury Board of Education for 20 years and is the founder and music director of the Jubilee Community Choir.

Connor said the award meant a great deal to her because it stood for a Salisbury native who did great things for the county, country and world.

“To receive an award that represents a person of Elizabeth Koontz’s status is an honor,” she said.

Wright shared a memory during the banquet that showcased Koontz’s educator mentality.

“Out of all of her accomplishments, she was a teacher,” she said.

Wright said she wrote Koontz a letter when she was getting ready to begin graduate school. Koontz sent her a bulky envelope back.

“She had corrected my letter,” she said.

“It was a joy to be around (Koontz),” Carl Duncan said.

Students from Koontz Elementary School performed two musical selections at the banquet, led by music teacher Tiffany Garcia. While singing “I Got a Feeling” by The Black Eyed Peas, the students waved and twirled ribbons.

Levy said she was glad the students could attend the banquet and learn about the person their school was named after.

Among many accomplishments, Koontz was the first African-American president of the National Education Association and started its Center for Human Relations. President Richard Nixon named her as the director of the Women’s Bureau in the Department of Labor in 1969. And in 1970, she was a delegate to the United Nations Commission on the Status of Women.

Rebecca Stinson sang a few songs during the event, including powerful renditions of “Order my Steps” and “Wind Beneath my Wings.”

Levy said it was inspiring to hear all of the memories and see how Koontz affected people’s lives in the past, how she is still doing so today and how she will continue to do so in the future.

By Amanda Raymond amanda.raymond@salisburypost.com SALISBURY — A pool hall at 115 Mooresville Road will now be able to serve alcohol.... read more