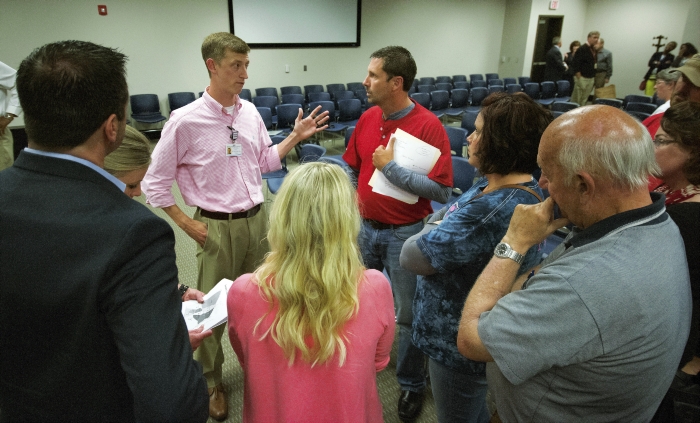 Board of Education Chair Josh Wagner speaks to people after a May 2016 meeting. The board voted 4-3 to dismiss a proposal presented by SfL+a Architects that recommended closing six elementary schools.

SALISBURY — The Rowan-Salisbury Board of Education voted at a called meeting Thursday to dismiss a proposal presented by SfL+a Architects.

The proposal, presented to the board on April 7, recommended the closure of six elementary schools — Enochville, Faith, Morgan and Mount Ulla elementaries, in addition to the already slated Cleveland and Woodleaf elementaries. The proposal sparked outrage among parents and community members.

The board met in the board room of the Wallace Educational Forum, and began by giving comments. Board member Travis Allen read from a pre-written statement, and clarified that he was not in favor of taking schools from communities, and was only for consolidation if it involved the opening of a new school. But something had to be done about aging school buildings.

“Why do we want our children surrounded by 90-year-old buildings when nothing else in their lives is based on the 1920s?” he said.

Dr. Richard Miller reiterated that this was the first board to look at the system as a whole, and address system needs and look towards the future. He referenced the Wallace Forum, which he said was the first major project the system had done after the merger of the Salisbury and county school systems. And encouraged the community to give the board freedom to have conversations and look at data.

“If you want us to function as the elected body, we’ve got to be able to have all the data from all the people, and not just your piece of data because we have to look at all of it . . . so we have to take a systematic, systemic look at it. So I encourage you to give us the latitude to do that, because this scenario one, which seems to have generated such interest, is only one scenario that was presented as information . . . We’re going to have to have a lot of those scenarios presented when we get to the point of being able to make a decision that this is what’s in the best interest of the kids, and the community and the system as a whole,” he said.

Board Chair Josh Wagner said the board asked SfL+a for one scenario to start with. He said the board thought there would be recommendations for closures, but did not know in advance what they would be.

“I had no idea how many, I didn’t know what schools,” he said.

Board members made it clear that the problems the school system faces — nearly $30 million in immediate capital needs, aging infrastructure and only $2 million in county funds to address system maintenance needs — are not going away. The board, and the system, still need to plan for the future. Wagner said the board would need to make a “blanket effort” and go out into the community to talk about the future of the school system. He said it was “vital” for the county to figure out “where it needs to go.”

“What are we going to do? Who are we going to be? Do we want community schools represented in every community as 35 buildings? Do we want to look at some alternative, whatever that may be, over the next five years, ten years? We don’t know that answer, but I think it’s time that we ask . . . there’s so many questions, and we’re just getting started,” he said.

The community interest and feedback generated by the proposal has been a positive thing, Wagner said, and he encouraged community members to stay involved, to keep coming to meetings — whether they had a stake in schools or not.

Board member Dean Hunter said the board had multiple questions about the proposal, but had not had the time to address them as a public body.

“When I first saw it, my first reaction to it myself was, ‘There’s no way we can do that,'” he said. “My first reaction was, ‘I would never vote for that.’ I saw several things immediately that I didn’t think would work for our system — things that I didn’t really agree with — but then, of course, we were just being presented with a proposal.”

Hunter made the motion to dismiss consideration of the closures of Morgan, Faith, Enochville and Mount Ulla elementaries as proposed by SfL+a Architects. The motion was seconded by Travis Allen.

Chuck Hughes wondered why the board needed to vote to dismiss the proposal, when they never voted to accept it.

Hunter also acknowledged that the proposal was never anything more than information, but said he felt that a vote was needed.

“I think it would be beneficial to us, but more importantly, beneficial to the community, to hear us say, by consensus — what more is a vote? So why not vote, and show a consensus that we’re not in favor of it?” He said.

Dr. Richard Miller also disagreed with the idea of taking a vote, as well as the motion’s wording.

“As we have dialogue, one or more of those schools could come back into discussion, so a vote today shouldn’t preclude the fact that we’ve got to have discussions, which may or may not include one or more of these other four, so that’s why I’m leaning for — we didn’t do anything but hear a report, why do we need to do anything else?” He wondered.

The vote was a chance for all parties to “kinda take a step back,” and move forward with conversation.

“We haven’t even begun to look at what the options are. Like Dean said, this is one option. Is this the only way that we can maximize funding? No, it’s not. We can certainly do it other ways. Would this be the quickest way? Sure . . . but it’s not the only way . . . if you take this as us throwing our hands up and we’re doing nothing — that’s not the case. We’re going to continue to look at this. But we understand that there has to be other points of view,” Wagner said.

The board voted to dismiss the proposal in a 4-3 vote, with Hughes, Allen, Hunter and Wagner voting for the dismissal and Susan Cox, Jean Kennedy and Dr. Richard Miller voting against. Cox clarified after the vote that she voted against the motion because of its wording.

The possible merger of Cleveland and Woodleaf were not dismissed by the board.