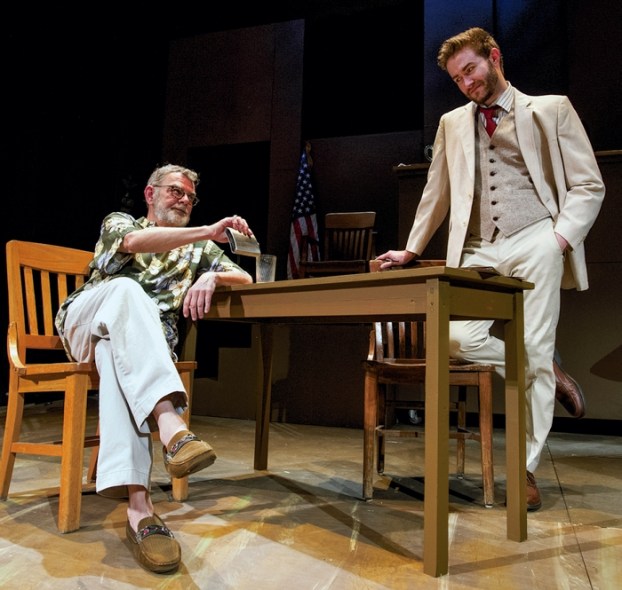 ALLISON LEE ISLEY/SALISBURY POST Gary Thornburg and Joseph Cody on stage for 'A Time to Kill.'

‘A Time to Kill’ plays on many complex emotions

The opening night audience for “A Time to Kill,” Piedmont Players’ newest production, stood up and cheered for the cast as the show ended.

Based on John Grisham’s book of the same name, the play is necessarily dark, as were the moody, bare sets. It’s also a long play as the crime and trial play out. Since it involves the rape of a 10-year-old girl, it’s a bit much for children.

Joseph Cody does an exceptional job as Jake Brigance, the lawyer with an unwinnable case, but plenty of chutzpah and a gift with words. He earned a standing ovation. He can be excited and cocky, tired and downtrodden, clever and devastated. Cody carries the play.

His cohorts on the case are Lucien Wilbanks, a disbarred attorney played gleefully by Gary Thornburg, perfectly cast once again. He captures the essence of a savvy, hard drinking, devil-may-care former attorney, loaded with advice and some tricks.

Javeneh Makanvand is new and surprisingly strong as Ellen Roark, an ambitious law student happy to fight a case that reeks of injustice in many ways. She’s the loudest voice of social consciousness, and the daughter of a rich and powerful attorney. Makanvand steps into the scene and takes control.

Justin Davis, who plays the defendant, Carl Lee Hailey, also earned a well-deserved round of applause for his role as the girl’s father, on trial for killing her rapists outside the courtroom after a bond hearing.

Catawba College President Brien Lewis plays Judge Omar Noose, a great name for a man on the bench. He portrays the judge as world weary and tired of all the bull he hears daily in his courtroom. He’s also had enough of the antics of district attorney Rufus Buckley, a publicity-seeking future gubernatorial candidate.

Marc Trent Tucker is Buckley, and he seems to be channeling Kevin Spacey not from the movie, but from “Midnight in the Garden of Good and Evil” with his thick drawl and cadence that ends each sentence with a question mark.

Grisham came up with some incredible names for his characters, such as Noose and later on an expert witness, Dr. Wilbert Rodeheaver. Ed Whitney plays the psychiatrist with a loud mouth and a lot of bluster.

In contrast, Gus Andrews is the defense’s expert witness, quiet, solid, sure, but with a past that no one knew about.

In case you haven’t read the book or seen the movie, the plot is pretty straightforward. Two stoned and drunk white boys determine they are going to rape someone, and they happen upon the 10-year-old black girl, hurling a full beer can at her and beating her before tying her up and raping her. They’re about to hang her when a car passes by. We never see any of this, thankfully.

The girl’s father, Carl Lee, is in the courtroom when they are arraigned, and happens to sit with lawyer Jake, who happens to be there for another reason. Jake successfully defended Carl Lee’s brother in a murder trial. The minute Carl Lee hears the statement describing what happened, his face turns to steel and the audience knows something explosive is coming.

When it does, he convinces Jake to defend an indefensible case — Carl Lee has murdered the two men, turned himself in and confessed. But Carl Lee is sure Jake can keep him out of the gas chamber so he can go back to his wife and children.

The bulk of the play is planning the defense and going through the trial. And along the way, because this is Mississippi and Carl Lee is black and his victims white, as is Jake, the KKK arrives in force, burning crosses, breaking windows and then committing a more heinous and potentially deadly act. Jake gets death threats, a bomb is delivered to his house, and he has to send his wife and children away for their safety.

Ozzie Walls, played by Joe Elliott, is the black sheriff who’s sympathetic to Carl Lee, friends with Jake and sitting on a heap of trouble. Cherokee Earnhardt is the bailiff Vernon Pate, who is also sympathetic, but both men know Carl Lee doesn’t have much of a chance.

Alexis Greer has a brief, but intense role as Carl Lee’s wife, Gwen. She’s not too sure about Jake, and her main concern is she needs Carl Lee as a bread winner. She also has to nurse her traumatized and terrified little girl back to life, try to soothe her nightmares and protect her from more harm.

Reid Leonard’s direction and design carry this emotional play to where it needs to be. It seems a bit long at times, around two and a half hours, and there were opening night jitters evident in some actors, but the cast completely won over the audience.

If you’re a Grisham fan, this one’s for you.

By Rebecca Rider rebecca.rider@salisburypost.com SALISBURY — The Rowan-Salisbury Board of Education voted at a called meeting Thursday to dismiss a... read more