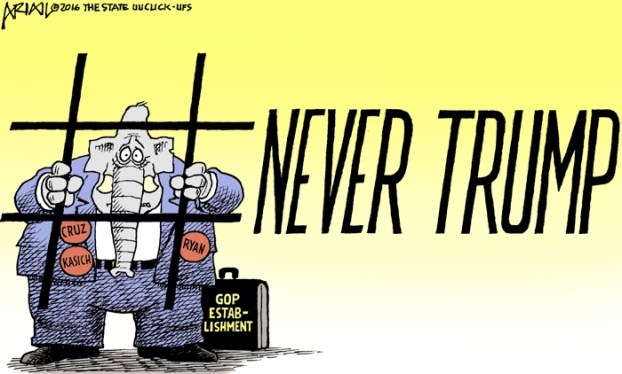 Trump prevails, but nothing’s on fire; this is fine

So. This is happening.

You scream wordlessly for a full minute.

Donald Trump is the presumptive Republican nominee for president.

You begin gathering logs for a great bonfire.

Reince Priebus tweeted, “.@realDonaldTrump will be presumptive @GOP nominee, we all need to unite and focus on defeating @HillaryClinton #NeverClinton.”

You pack the pile high with newspapers predicting that Trump was a flash in the pan, with confident op-eds denouncing Trump, with the “Never Trump” issues of magazines.

Ted Cruz has stepped down.

You whisper the name “Paul Ryan” into the wind, but no one answers.

He has suspended his campaign — “suspended,” as though that meant anything but dropping out of the race. As though he could resume the campaign any time he wanted. The word “suspended” has no meaning here.

All around you, the trees are weeping.

Donald Trump is pivoting towards the general.

A member of the establishment runs past. His garments are in tatters and he is trying to light his bow tie on fire.

Who knew that Ted Cruz was the only thing holding everything together?

There is the faint sound of lamentations coming from the pines, as though many had gathered with the Red Woman to summon the spirit of Reagan back into his body, and failed.

John Kasich is still there. Perhaps he can pull off a win by going full Chance-the-Gardener and just lucking into the nomination by dint of simply being there.

But then again, perhaps not.

A horseshoe falls off the doorframe. A wolf howls mournfully in the distance.

Everyone “misunderestimated” Trump. We didn’t know. All the people paid to know these things said not to worry, so we did not worry.

All the milk has curdled. The contextualizing plaque spontaneously falls off every statue of a former Confederate officer.

The omens were there. “Gee, maybe we’re being too mean to Ted Cruz,” I thought, yesterday. Yes, I knew, this was Ted Cruz. Ted “The World Is On Fire” Cruz. Ted “Let’s Shut Down The Government As A Publicity Stunt” Cruz. But perhaps even he did not deserve what he suffered at the end.

In the zoo the last elephants huddle together, as if in conference. Then the zookeepers watch, frozen, as the elephants begin to stampede headlong into the wall.

Just this week, Ted Cruz suffered the following indignities: Larry Wilmore, at the White House correspondents’ dinner, made not one, not two, not even three, but eight jokes whose only punchline was that Ted Cruz is the Zodiac Killer. His wife Heidi only kind of denied that he was the Zodiac Killer. John Boehner called him “Lucifer in the Flesh” and a “miserable son-of-a-bitch.”

A comet shoots across the sky, leaving a trail like blood.

And he lost Indiana.

Now all that remains is Donald Trump.

”Macbeth,” Leslie Odom, Jr., announces, without meaning to, at the end of a critical number in “Hamilton.” “Macbeth.” The theater goes still.

Donald Trump tried to be statesmanlike but he could only pull it off for a few hours at a stretch. Then he has to lie down and recharge.

A single black cat crosses the street in front of you.

Trump’s path through California to the convention is clear.

You try to cross but there are too many black cats like a mighty cat torrent, blocking your path. You wait hours for these cats to finish crossing but they do not cease.

Here we are. This is fine.

Finally you turn away from the cats and return home by another way.

You climb onto the pyre and light it on fire.

Alexandra Petri writes the ComPost blog, offering a lighter take on the news and opinions of the day. She is the author of “A Field Guide to Awkward Silences.”

It’s not clear why Commissioner Craig Pierce was so determined Monday to lease space at the West End Plaza for... read more