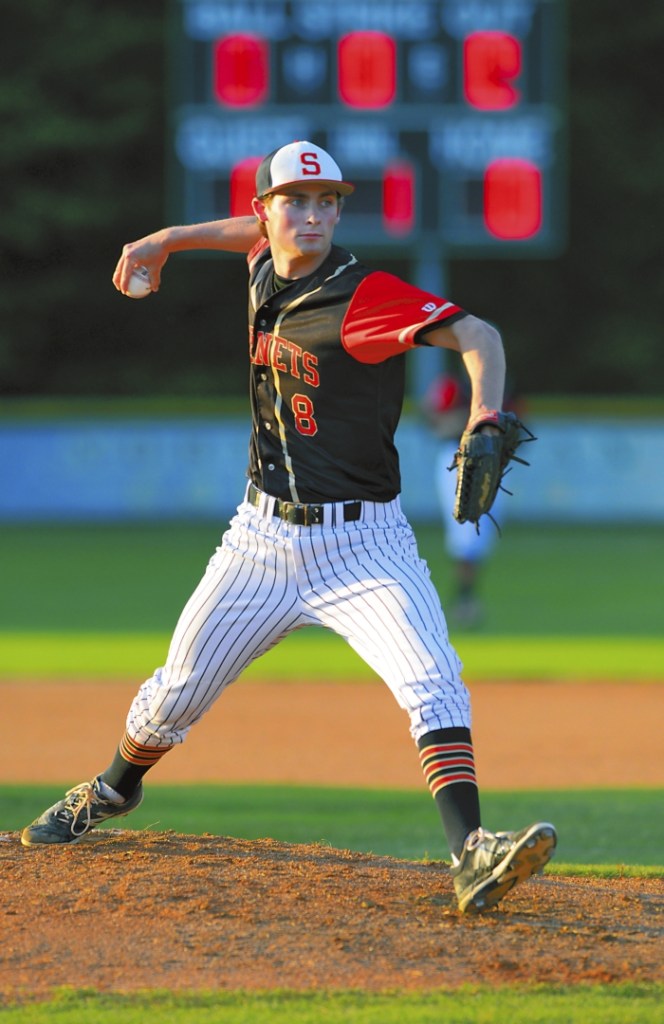 Wayne Hinshaw/for the Salisbury Post ... Salisbury pitcher Will Steinman went the distance on Wednesday in a 2-1 win over West Davidson in the CCC semifinals in Thomasville. He struck out five batters.

Baseball tournament roundup …
Top-seeded North Rowan rolled behind lefty Brandon White on Wednesday and beat No. 4 seed East Davidson, 7-0, in a semifinal game in the Central Carolina Conference Tournamet.
The Cavaliers (16-7) won their ninth game in a row and moved into Friday’s 7 p.m. championship game at Thomasville’s Finch Field against Salisbury. It’s North’s longest winning streak since 1999. The 1999 Cavs, who went 22-3, won 12 games in a row. The freshman DH on that team was Aaron Rimer, who now coaches North.
White (4-4) was in a bases-loaded jam in the second but worked out of it with a strikeout and a wild double play that included third baseman Holden Lanier throwing out a runner at the plate.
“Brandon was in control after the second,” North coach Aaron Rimer said. “He threw a complete game with 80 pitches.”
North got a two-run homer from Robbie Monroe in the first inning and never looked back.
“That was a monster shot off the (left-field) foul pole by Robbie in the first inning and we hit up and down the lineup,” Rimer said. “We had 10 hits and seven different guys got hits.”
Lanier had two hits. North scored twice in the third and got three runs in the fifth.
North will send Noah Gonzalez to the mound against the Hornets on Friday.
Friday’s game won’t change any seeds. North will be the CCC’s No. 1 seed for the 2A state playoffs. The playoffs are scheduled to start on Wednesday.

Salisbury 2, West Davidson 1
Will Steinman’s pitching carried the Hornets to a big victory against the Green Dragons in a CCC semifinal at Finch Field.
The victory assures the Hornets (12-13) of the CCC’s No. 2 seed for the state playoffs. The teams split their regular-season meetings and tied in the standings.
Steinman (4-4) fanned five and went the distance on the mound. He got the final out with the tying run at third base.
Neither team scored until Salisbury pushed across a run in the fifth. Joe Steinman, Will’s younger brother, got the run home with a groundout.
Both teams scratched out a run in the sixth.
Salisbury was limited to three hits, with Bo Rusher, Alex Link and Griffin Myers getting one each. Harrison Smith and Link scored runs.
Carson Fowler had two hits for the Green Dragons. West Davidson pitcher Chris Mauck struck out seven Hornets.

Carson 5, Hickory Ridge 1
Owen White (6-3) pitched and batted Carson to a first-round victory against the Ragin’ Bulls in the weather-delayed first round of the South Piedmont Conference Tournament.
Carson was the higher seed (No. 3), but the game had to be played at sixth-seeded Hickory Ridge due to wet field conditions at Carson.
White struck out nine. He allowed six hits in six innings before Caleb Hall pitched the seventh.
Third-seeded Carson (16-9) scored a run in the first inning and got three in the second to take control.
White belted his third homer in his last four games and drove in two runs. Michael Morrison had two hits and knocked in three runs.
Cameron Prugh had two hits.
Catcher Ryan Bearden threw out two baserunners to spark Carson’s defense.
Carson is scheduled to play a semifinal game tonight at 7 p.m. at home against No. 7 seed Cox Mill. Cox Mill upset second-seeded East Rowan on Wednesday.
Fifth-seeded Concord plays at top-seeded West Rowan in the other semifinal.
West is assured of being the league’s top seed for the state playoffs. If Carson, Cox Mill or Concord wins the tournament, they’ll supplant East Rowan as the league’s No. 2 seed.

Davie 11, Parkland 1
The second-seeded War Eagles pounded No. 7 seed Parkland, 11-1, in the first round of the Central Piedmont Conference tournament on Wednesday.
Zach Hudspeth was the winning pitcher. Chris Reynolds, Tyler Roberts, Nathan Harrell, Ryan Harrell and Mitchell McGee had two hits each.
Davie (18-4) plays in a semifinal tonight at North Davidson. Davie plays No. 3 seed West Forsyth in the nightcap after top-seeded North Davidson battles No. 4 Mount Tabor.