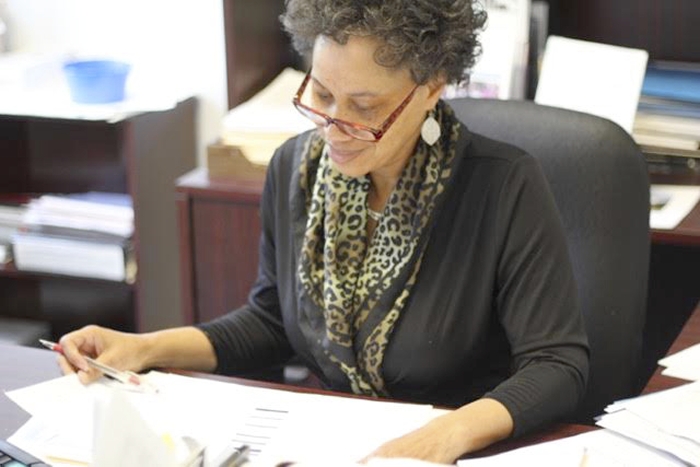 SALISBURY – With commencement just two days away, excitement and uncertainty are in the air for many Livingstone College seniors.

They’re happy over becoming college graduates, yet some are filled with angst as they try to land that first job or wait to hear whether they’ve been accepted into graduate school.

But rest assured, Livingstone seniors aren’t the only ones who are “feeling it” this time of the year. Just ask Registrar Wendy Jackson.

Jackson has worked at Livingstone for 30 years and has been the institution’s registrar since 1991. Livingstone was founded in 1879 by the African Methodist Episcopal Zion Church, and during this time of year the 137-year old institution practically becomes Jackson’s home. In fact, to say she puts in extra hours leading up to commencement is quite the understatement.

Approximately 130 graduating seniors are expected to receive degrees at the school’s 133rd commencement on May 7, which begins at 9 a.m. inside Alumni Memorial Stadium and includes students who became degree-eligible in December. Commencement will be moved inside Varick Auditorium in case of inclement weather.

Rev. Dr. Yolanda Pierce, a scholar who earned her degrees from Ivy League schools and is the Director of the Center for Black Church Studies at Princeton Theological Seminary, will deliver the commencement address. The ceremony will also feature members of the Class of 1966, also known as the Golden Graduates.

By now seniors are counting the hours until commencement, but no matter how well they’ve done academically or how many hours of community service they’ve notched, they can’t walk across the stage to shake the hand of President Dr. Jimmy R. Jenkins, Sr. and receive their degrees unless they’re cleared for graduation and approved by the faculty and board of trustees.

“This time of the year is extremely busy but very exciting,” Jackson said. “After four or more years of watching the students mature, we get to delight in knowing they’re prepared to go out and command their rightful place in the global society. One of the seniors’ final steps toward graduation is Senior Exit Clearances. It’s a true joy to see their faces light up when they come into the Registrar’s Office because they’ve received the ‘famous’ email from us stating that their Senior Exit Clearance Card is ready to be picked up.”

“If our students’ records aren’t accurate, that can cause a myriad of problems especially at the end of the academic year when it’s time for the awarding of degrees,” Duncan said. “The importance of the work Mrs. Jackson and her staff do to ensure everything is as it should be cannot be taken for granted. As the head of academic affairs, I truly appreciate their diligence in making sure precise records are kept so we’re able to provide a correct list of names of graduates each year at commencement. Having successful graduation exercises year after year entails a lot of hard work from various campus departments, and the Registrar’s Office is at the heart of that.”

This week, Jackson and her staff have pretty much thrown the proverbial 5 o’clock quitting time out the window. On graduation eve, they’ll likely work well past midnight.

“Our latest night is the Friday before graduation, and we’ve stayed as late as 2 a.m. only to be back around 7 the next morning,” Jackson said. “We don’t’ really get a lot of sleep before graduation, but the most important thing is getting it right for the students.”

Jackson said she can relate to the excitement felt by parents of Livingstone’s soon-to-be-graduates because her daughter graduates from Johnson C. Smith University next week.

As far as handling all of the stress that’s inherent with her job this time of the year, Jackson said she turns to Psalms 61:1-3 when tension or anxiety start to kick in, and she also tries to enjoy an occasional laugh throughout the day to remain balanced.

On Sunday, the day after commencement, no one would blame her if she slept in and took it easy all day. But Jackson wouldn’t hear of it. She plans, instead, to attend services at Moore’s Chapel AME Zion Church so she can thank God for allowing her office and the college as a whole to get through another academic year and another commencement.