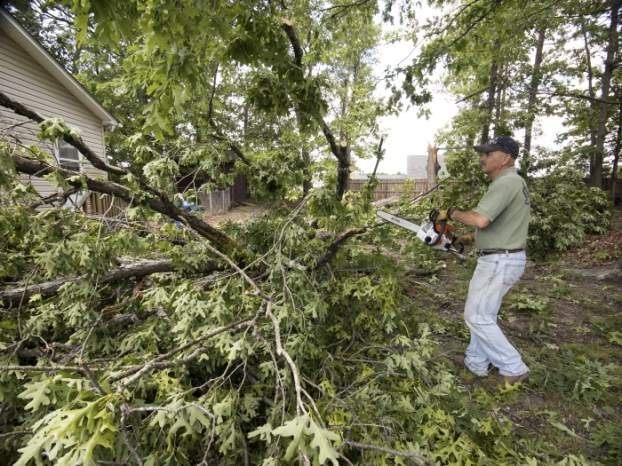 JON C. LAKEY / SALISBURY POST J.C. Caskey removes the limbs from two oak trees that fell in his son's yard after the Tuesday evening storm. Late evening thunderstorms on Tuesday brought rain, hail and menacing lightning to Rowan County. Some areas, including Faith, had winds that knocked down trees and pulled roofs off of at least one storage barn along Crescent Road. Wednesday, May 4, 2016, in Faith, N.C. JON C. LAKEY / SALISBURY POST Tracy Presson was happily relieved that the two oak trees that fell toward her home on Ellen Street in Faith did not cause damage. Late evening thunderstorms on Tuesday brought rain, hail and menacing lightning to Rowan County. Some areas, including Faith, had winds that knocked down trees and pulled roofs off of at least one storage barn along Crescent Road.

When the thunderstorm and sheets of rain blew up that evening, Presson opened her door long enough to grab her rescue dog, Princess, and then stayed inside.

“All of a sudden, I knew it was comin’, but it just started,” she said.

The next morning, Presson’s phone rang twice, but she didn’t answer it. And then someone knocked on her door.

“I thought, ‘What is going on this morning?’ ” she remembered.

That’s when she found out about the trees. Two trees from her neighbor’s yard were blown over in the storm and landed mere inches from the siding of her Ellen Street home.

Caskey is the father of Presson’s neighbor, whom Caskey said is  away on his honeymoon. A friend of his daughter-in-law alerted the couple about the downed trees. They called Caskey, who said a tree was blown down in his own pasture. When he got there, he went to check on Presson.

The two oak trees used to stand in Presson’s neighbor’s yard, but now they were lying across her driveway, their leaves brushing her side porch. One tree was snapped off by the wind, and the other was completely uprooted and toppled over. Presson said she was relieved no damage was done to her house, and said she thinks it’s going to take a while to clean up.

All along Crescent Road, the path the wind took was clear in broken branches, split trees and leaning fences. At one house, the tin roof of a barn was wrenched off, landing in a plot of land behind the house.

Wednesday afternoon, Caskey was out with his chainsaw, lopping off branches and pulling aside limbs. He hoped to have both trees down to logs by the end of the day. When that was done, he planned cut them up for lumber. Presson’s neighbors return Friday, and Caskey thinks there will still be plenty of cleanup left to do.

A country says thanks: These are heady days for a girl from Faith, N.C.

SALISBURY — Lucy Josey Anderson has been receiving a lot of attention lately, simply because she was a Navy WAVE... read more