No injuries in three-vehicle crash at Mooresville, Windmill roads 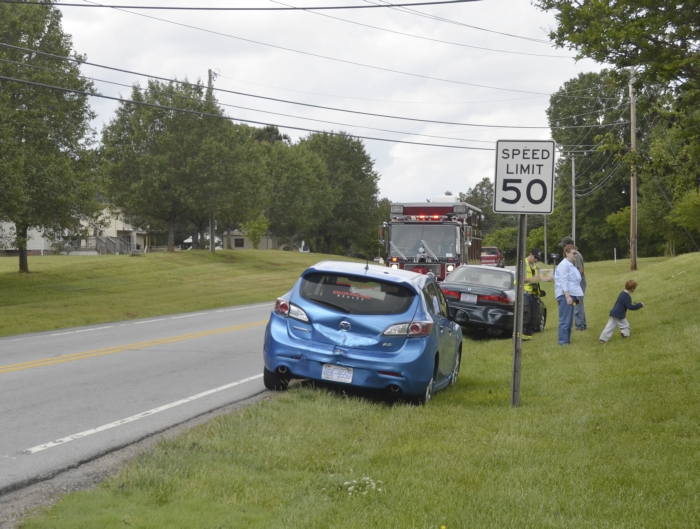 These two vehicles were hit from behind after the driver of a third vehicle, not shown, took her eyes off the road and struck them from behind. Locke Fire Department and Rowan EMS responded to the scene. No one was injured. The N.C. Highway Patrol charged the third driver, Bette Harrison, of Salisbury. Shavonne Walker/Salisbury Post

SALISBURY — There were no injuries following a three-vehicle crash Wednesday at Mooresville and Windmill roads, close to the entrance of the Windmill Ridge subdivision. One woman was charged in the crash.

Locke firefighters were dispatched to the crash just before 11:30 a.m., which was initially reported as a four-vehicle accident. Assistant Fire Chief Bill Hamrick said fire crews quickly learned the fourth car was actually a passerby who stopped to help.

Rowan EMS arrived, Hamrick said, but all of the parties refused care. No injuries were reported.

Hamrick noted since Mooresville Road is a busy roadway, firetrucks pulled into the back of two disabled vehicles to shield them from inadvertently getting hit by oncoming cars.

Highway Patrol Trooper J.P. Page said Bette Harrison, 61, of Salisbury, was traveling on Mooresville Road in a Ford Escape when she looked into her rear view mirror at a mail truck, and by the time she looked back at the road, the two vehicles in front of her were stopped.

Andrea Barron, 30, also of Salisbury, was in a green Honda attempting to make a left turn onto Harris Road. Patricia Lisun, 64, of Mooresville, was behind the Honda in her blue Mazda when she was struck from behind and pushed into the Honda.

Everyone was wearing seat belts, including the three children inside Barron’s vehicle. Harrison was charged with failure to reduce speed.