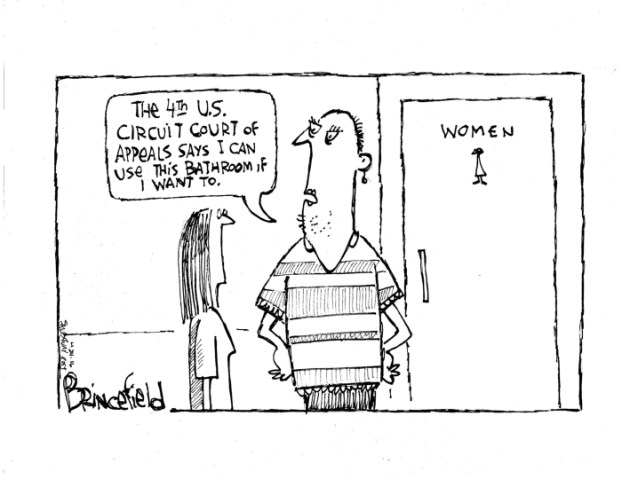 Our question for today: What is the proper etiquette when confronted with an unexpected penis?

That’s from Roz, a Baltimore-area reader who emailed me a few days ago. Roz describes herself as a left-wing progressive, a “long-time supporter of gay rights,” a feminist and a Democrat who worked for President Obama’s election.

But Roz is concerned about transsexuals in the bathroom — more accurately, the locker room. “I am all for trans people having equal rights,” she writes, “but what about when they collide with non-trans people’s privacy?”

Roz’s question grows from an experience years ago at a spiritual retreat in California; she says she “freaked out” when a naked guy appeared in the group shower. “I was raised in the ‘50s to think I am not supposed to expose my naked body to strangers of the opposite sex,” writes Roz, who says she swims three times a week for exercise and walks through the women’s locker room in the buff.

“I have no problem with trans people of whatever biology or stage of transition in bathroom stalls” she says, “but what about locker rooms where nudity is normal? I would be very uncomfortable if I was unclothed and someone two feet away from me took off their clothes and a penis appeared.”

Roz wants to know if she is prejudiced and needs to “get over this” or whether it is fair to ask trans people to make accommodations in common areas where it is normal for people to walk around starkers.

It’s a good question. Wish I had a good answer. I toss the question out in hopes someone more qualified than I will offer some insight. If anything of interest comes through, I’ll share it in a future column.

Meantime, Roz’s email offers a valuable primer in the way thoughtful people confront the inevitable quandaries and conundrums raised by social change. They question conscience, they search soul, they struggle to find the answer that best respects the needs and dignity of all involved.

Her example stands in sharp contrast to those being offered in North Carolina and elsewhere, where laws and rules are being pondered and passed in a panicky haste to restrict transgender people to the restroom corresponding with their birth gender. This, we are told, is necessary to prevent sexual molestation of children in public facilities.

Which is, of course, nothing more than a new iteration of the old canard about LGBT people as sexual predators. You will notice that nobody is contemplating new laws to protect children from Dennis Hastert.

That’s because protecting children is not the point. The exploitation and manipulation of fear is.

Increasingly, this is what our lawmakers do. How many times have you seen laws promulgated to address things that never happen? Remember California Democratic Sen. Dianne Feinstein’s bid for a constitutional amendment to outlaw flag burning? Remember when Oklahoma tried to amend its constitution to stop the use of Sharia law?

For many Americans, fear is the reflexive response to social change. They are threatened by what is outside their experience, by whatever is new, or different, or odd. And too often, those fears get enshrined into law by pandering legislators, building walls to restrict what they don’t even try to understand.

Roz’s email is a timely reminder that a person can choose to be better than that. She can challenge herself, grapple the fears to which other people surrender. She can reject the false security of walls.

And maybe even build a few bridges instead.

It’s not clear why Commissioner Craig Pierce was so determined Monday to lease space at the West End Plaza for... read more