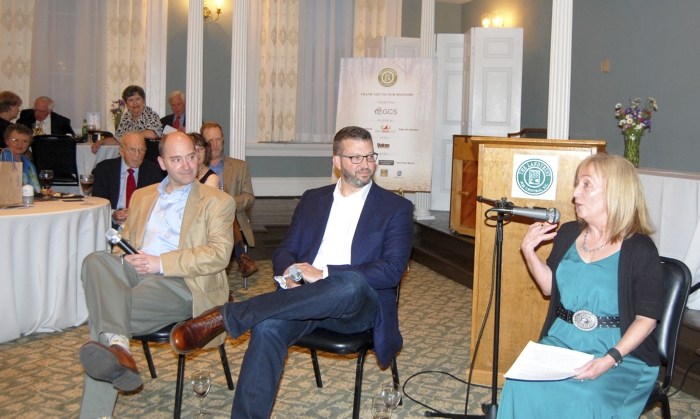 Hart and more than a hundred of his fans and friends did a fundraiser Saturday night for the LandTrust for Central North Carolina at Rowan Museum. It was a chance to get a signed book early while supporting the efforts of the LandTrust, an organization near and dear to Hart’s heart.

The format this time was a little different. Instead of giving his book speech, Hart was grilled — lightly — by Dr. Janice Fuller, poet and Catawba College English professor. He and his editor, Pete Wolverton, answered insightful and probing questions from Fuller.

Hart loves the land and wrote a stunningly beautiful piece, “Why I Write the South,” describing that deep connection. He talked a little about how he swam and fished and played in the woods and slept under the stars on family property on the Yadkin River, property long since sold and ruined by dumps, disintegrating trailer parks and abandoned cars.

The poet in Fuller recognized prose that reads like poetry and asked him to talk about his assertion, “There are those who appreciate the land and those who don’t.”

“It’s very important to protect our open spaces,” Hart said. “I’ve seen how permanent the loss of open space is.”

Hart remembers those 472 acres on High Rock Lake vividly. “For me as a kid it was unbelievable. We ran free on it.” That’s why he’s bought more than 100 acres in the Charlottesville, Va., area, to keep it from ever being developed, and he made sure his neighbors would do the same, so a huge tract of rolling hills, not far from Monticello and next to James Monroe’s former home, will remain mostly wild.

Some of his joy in the land comes when he hears nothing but birds and animals in the woods. “It’s a stillness I wanted my own family to have,” including wife Katie, also from Salisbury, and daughters Sophie and Saylor.

Hart’s first book, “The King of Lies,” took place all over Salisbury. His character, Work Pickens, grew up near City Park, where Hart’s family lives. Hart courted his wife on a bench in Hurley Park.

Fuller noted how his language in the novels has music, rhythm and poetry. She mentioned that the Winston-Salem Journal says Hart’s writing is not overdone and self-indulgent.

“Oh, but I am,” Hart countered. “I have to be careful.” He said he takes time to work on the language so it can deliver a resonance for his readers.

“If I do it right, it gives readers an experience beyond poetry. I love that faint tone. I love it when I do that. I can’t do it with every sentence, but sometimes I try to take you to a deeper level.”

Hart laughed, “I’m a sucker for purple prose. I’m so aware of it, I curtail it aggressively.”

Fuller said she had to finish “Redemption Road” before grading papers. She couldn’t put it down.

“I noticed some of the land (in the book) seemed to be desecrated. … I notice heinous things happen in the novels on land that was desecrated, when you talk about color bleeding on to the fields. Was desecration part of your theme?”

“I love this question. You are clearly keying in on the language,” Hart answered. “Some word choice is subconscious. When I hear someone react to it, I realize it was subconscious.”

He drove out to the ruined property because he wanted people to feel what it was like. “Writing fiction is cheap therapy.”

Hart’s property in Virginia, he said, was an effort “to find what I had lost.”

Pete Wolverton said, “You find darkness in his novels, but you find people there who will help.”

Hart says he likes to create threat, but also a way to escape it.

Fuller loved the title. “It’s a path through things that are so impossibly dark.”

And in Hart’s essay on writing the South, she pointed to his description of the “wild and secret wood,” saying it reminded her of Hawthorne’s writing, where what is not acceptable in society takes place in the wild woods.

“There are secret places in the world. I remember the green light and the silence. I think childhood bleeds into fiction,” he said. “Down River” was the novel most specifically geared to his childhood.

This time, he wrote about a place that has no name. You can see Salisbury in it, but it’s not Salisbury, except for certain things, like Wong’s. The Chinese restaurant is in the book, along with longtime friend and now judge James Randolph.

Fuller said Hart dares to explore suffering only women endure and “does a wonderful job to show those agonies.”

“I spent a year writing book five and it felt predictable. So I decided to focus on the woman who was a bit character in an earlier version, and the younger woman who plays a big role.

“I have never been scared of pushing the envelope.”

Wolverton said he has to give as much rein to Hart as he can to work through the process. “The thing about a John Hart book is, when John Hart is hitting his stride, the reader will get chills.”

Wolverton has seen a bit of book six and assured the crowd that readers will be chilled right from the start.

“My greatest joy is the passion and talent he brings to writing. He’s the most talented writer I’ve seen in the 25 years I have worked with writers.”