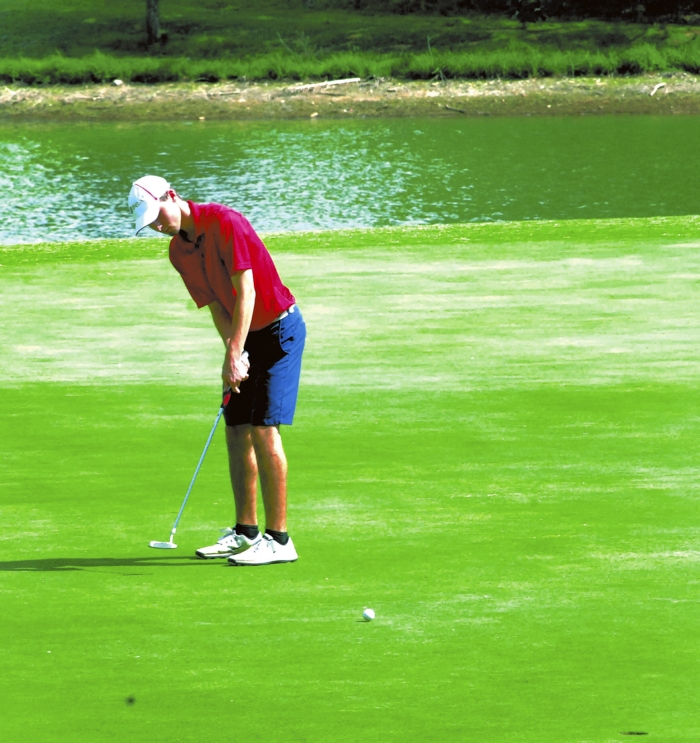 East Rowan’s golf team won the Midwest Regional at Asheboro’s Pinewood Country Club on Tuesday, adding the regional title to Rowan County and South Piedmont Conference championships.
“We set four goals for the season, and the boys went out and accomplished the third goal today,” East coach Rhett Teems said. “They all played really well.”
Teams are permitted to use five golfers in the 18-hole regional with the top four scores counting as the team score. East shot 297 and qualified for the state tournament, along with Union County neighbors Marvin Ridge (304) and Cuthbertson (311).
Among the individual qualifiers for the state event was Concord senior Walker Cress. He was Tuesday’s medalist with a 70, edging East Rowan junior Nick Lyerly by one stroke.
East got a 74 from steady senior Logan Shuping, who tied for third, and the difference-maker for the Mustangs was Christopher Queen. He turned in his best performance of the season with a 75 and tied for fifth.
“Chris had to overcome a two-stroke penalty, or he would’ve scored even better,” Teems said. “He had a great day.”
East’s fourth scorer was Bryson Sprinkle with a 77. Ben Rollins shot 81.
All the golfers caught a break with the weather.
“It stopped before we teed off and the rain held off until everyone finished,” Teems said. “It was wet, but no big deal. There was almost no wind, and the course was in great shape.”
East was runner-up to Forestview in the 3A State Championships last spring. This year’s 36-hole championships will be held at the Country Club of Whispering Pines, in the Pinehurst area, next Monday and Tuesday.
“We know that the teams we saw today — Marvin Ridge and Cuthbertson — are going to play tough in the state,” Teems said. “And, of course, there’s Forestview, the defending champion. But we’ve got the right team to accomplish our last goal. We just have to go out and play two days of consistent golf.”
Carson shot 340 and finished 10th in the 13-team regional.
Bobby Bauer’s 78 led the Cougars. Other scores were Joseph Mitchem (83), Patrick Street (85), Tristan McDaniel (94) and Zain Tucker (97).
South Rowan’s Parker Chavis shot 79, while Andrew Hubbard shot 82.

CCC
In the 2A Midwest Regional at Mount Airy’s Cross Creek Country Club, the teams that qualified for state competition were Wilkes Central (301), South Stokes (312) and Forbush (317).
West Davidson finished fourth at 323, while Salisbury tied for fifth with West Stanly at 333.
Salisbury’s Alex Antosek shot 74 to tie for sixth and qualified as an individual for the 2A State Championships to be held next Monday and Tuesday at Foxfire Resort in Pinehurst.
Other Salisbury scores were Simon Post (82), Jacob Pryor (88), Robbie Bergstone (89) and Miles Robinson (95).
North Rowan’s Jonathan Britton shot 107, while Spencer Everhart shot 114.
Wilkes Central’s Quinton Metz was the individual champion with a 70.