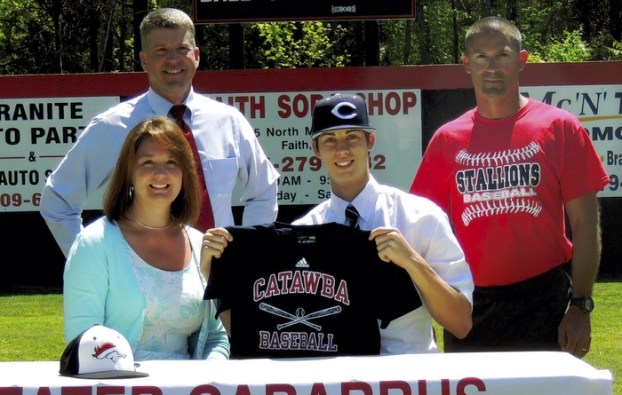 Sawyer Strickland poses for a photo with Greater Cabarrus coach Chris Lankford, right, and his parents. Strickland has signed to play baseball for Catawba.

SALISBURY — Not a lot of fans knew who Sawyer Strickland was when he started mowing down Caldwell County hitters last July in the American Legion baseball state tournament at Newman Park.
A week after that, Strickland was experiencing more success against Wheeling, the West Virginia state champions, in the Southeast Regional at Asheboro.
Strickland missed most of the 2015 American Legion summer with bursitis, but Jim Gantt, who coaches Rowan County Legion and Catawba College, saw enough of the right-hander to believe he can make an impact with Catawba.
Strickland, who plays for the Greater Cabarrus Stallions every spring, signed recently with Catawba’s Indians.
“Catawba has had so much success,” Strickland said. “I just want to be a part of it.”
Strickland’s friend Hunter Shepherd, a slugger for the Homeschool Stallions, signed with Catawba back in the fall.
“I’ve been playing with Hunter for six years, and I’m looking forward to playing with him for four more,” Strickland said. “And I know a lot of guys that already are on Catawba’s team. They were Legion teammates.”
The Homeschool Stallions were competitive in the Easter tournament held at Staton Field in 2015, and a lot of people who hadn’t taken them seriously, realized how strong they were.
This season the Stallions have been even better. They’ve put up a 27-6 record while traveling all over the map. They beat a good East Rowan team with Strickland on the mound and they’ve won road games at venues such as Shelby and Rock Hill, S.C.
“We were always excited when we got a chance to play against the public schools,” Strickland said. “East Rowan was a big game for us, and I’m glad we performed well.”
The Stallions recently finished third in the World Series for homeschool teams held in Auburndale, Fla. Strickland won two games in the World Series.
Strickland has put up sensational stats all season. He’s 8-1, with 53 strikeouts in 59 innings and a 1.31 ERA, and it’s not like the Stallions use him in their easy games. He’s walked only nine of the 236 batters he’s faced and opponents have batted .189 against him.
His only setback this season came in early March against South Stanly, a 17-6 team.
“I’ve been happy with the season,” Strickland said. “I’m still a pitcher who wants to get groundballs, but I’m throwing harder than last season and I’ve gotten more strikeouts than I ever have.”
Stallions coach Chris Lankford has coached Strickland since he was a seventh-grader. Strickland was mostly an outfielder until Lankford watched him throw in the bullpen several years ago and saw there was some potential there. Then he started giving him more innings on the mound.
“Pitching took off for Sawyer when he was playing for the West Rowan Junior Legion team after his sophomore year, and he’s been our ace the last two years,” Lankford said. “He’s a great person and a great pitcher. He can hit spots and he keeps hitters off-balance. He has command of a fastball, curveball and changeup, and he pounds the strike zone.”
Strickland is thin, but he’s 6 feet tall, and he’ll put on pounds and muscle with natural maturity as well as the assistance of Catawba’s weight room.
“I’m hoping to gain some mass after I get to Catawba,” Strickland said. “Right now, I’m just looking forward to another American Legion season.”
A lot of people are looking forward to seeing what a healthy Strickland can do at Newman Park.